As more than 1.5 million internally displaced people and refugees fled to the more secure regions of Iraqi Kurdistan, Father Douglas al-Bazi established a refugee camp focusing on the education and cultural development of children. 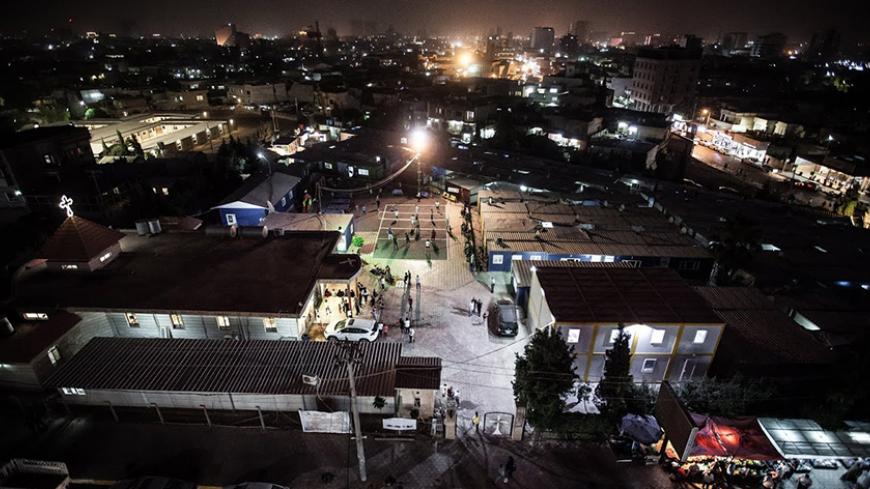 ERBIL, Iraq — The ongoing rise of the Islamic State (IS) in Iraq and Syria and the highly unstable security situation in these countries have resulted in the movement of more than 1.5 million internally displaced people and refugees fleeing into the more secure Iraqi Kurdistan.

As camps grew last year, often sheltering people in appalling conditions, one man decided to welcome hundreds of displaced families in his own way: by giving their children the best education he can in a region where many refugees struggle to meet their most basic needs. Father Douglas al-Bazi, the manager of the Mar Elia camp, told Al-Monitor, “We lost the battle, not the war. My generation? We are the losers, but we can provide a future to our kids.”

Inside a crowded library, a young girl sitting on a white leatherette sofa starts playing Christmas songs on her guitar. Next to her, her friend practices his violin skills before his afternoon lesson. “I love this machine,” said Rwaid, a 14-year-old boy from Qaraqosh, an Assyrian town in northern Iraq. “There was nothing like this in my old city,” he said, gripping the instrument that he now plays every day. He wants to become a musician. 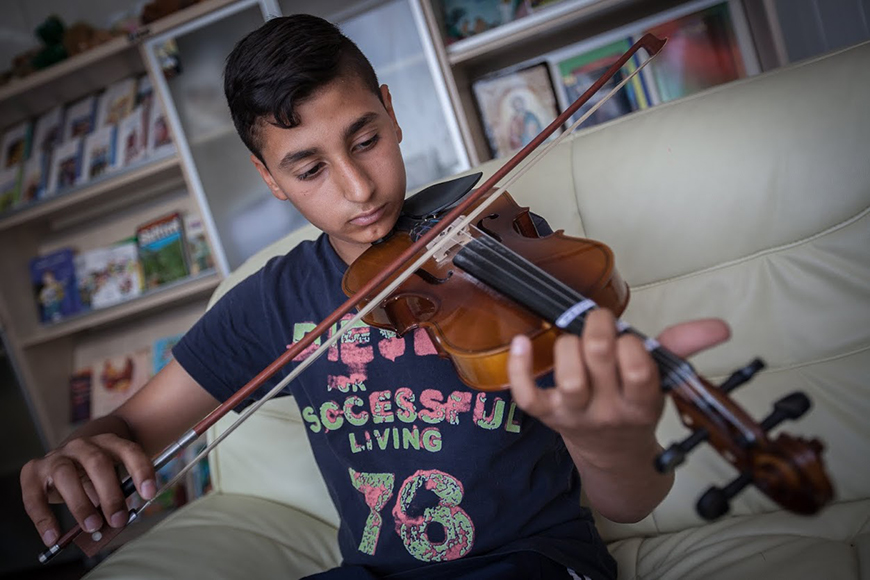 Rwaid from Qaraqosh practices on his violin before a lesson, at the Mar Elia camp, June 3, 2015. (photo by Sebastien Chatelier)

When Bazi first opened the gates of the Mar Elia Chaldean church to more than 500 displaced Christians, the lot surrounding his office was nothing but grass and mud. Today, 120 white caravans are nestled around a large playground with a volleyball court, Ping-Pong tables and swings. Near the entrance, in front of two classrooms, the library offers board games like “Baghdad Monopoly,” musical instruments and a wide range of books, including Jules Verne's “Twenty Thousand Leagues Under the Sea” and Alexandre Dumas’ “The Three Musketeers” in their original languages.

In his camp, which he calls a “center” and where refugees are called “relatives,” Bazi believes that education is the only way he can save his youngest guests from their traumas. “Believe me, IS’ next generation will be from our side [Christians] or from the Yazidis’ side,” Bazi said. “When the kids arrived here, they were completely lost for the first two weeks, angry and selfish. I remember the first time we offered them toys; within five minutes they destroyed them all. … Our kids, if they don’t have education, if they don’t have someone to look after them, do you think they are going to work for NASA? I don’t think so. It’s easy for IS to thrive among abandoned people.”

The camp, with its focus on education, seems out of place when compared to the dozens of other camps built in Iraqi Kurdistan when IS seized several cities in northern Iraq during the summer of 2014, including Mosul, Qaraqosh and Sinjar.

Baharka, situated just a few kilometers away from Mar Elia, shelters nearly 4,000 displaced Iraqis, mainly coming from Mosul, in dust-covered tents. There, only one in two children aged between 6 and 11 attend school. Even in Darashakran, a camp for Syrian refugees that Baharka camp manager Ahmad Abdo describes as “five-star,” the rate of school enrollment continues to decline due to pressure from families to send their children to work.

“It’s one of the best camps,” said Nissan, a 58-year-old father of six who arrived in Mar Elia from Qaraqosh in the back of an oil truck 10 months ago. “I visited another camp, but it was too crowded. Almost 400 families were living there. It’s better here because we are with our neighbors; everyone knows each other. In other camps, there is no education, no libraries, no organized trips or music and English courses. Only here,” he added. “Jealousy exists. In the other camps, they say we have everything.”

Mar Elia, situated in the Christian neighborhood of Ankawa, regularly receives generous contributions, often in the form of goods like cinema tickets, plasma TVs and even caravans. These gifts from private donors are a scarce commodity in a region flooded with refugees and internally displaced people. The Baharka camp, mainly funded by the United Nations High Commissioner for Refugees and the World Food Program, has so far failed to find non-public supporters, even though it shelters six times more people than Mar Elia.

“It’s very difficult to find them; we are searching,” Abdo said. “Camps in Ankawa do better than the others; I don’t know why,” he added, confirming that competition for funding can be rough between the camps.

With his clean and tidy site that regularly attracts donors, Bazi said he hasn’t made any friends among the other camp managers in the region, as they don’t understand how he can spend so much money on so few. “They tell me, ‘What are you doing? People are dying, looking for food and medicine, and you are looking for books.’ But I don’t accept these remarks, never. I lived my whole life in Baghdad. At that time, people were looking for food and medicine. No one cared about education. But here, we do,” said the priest, who saw his church bombed and was kidnapped when he was still living in the capital.

“It’s not empty stomachs that destroyed my country; it’s empty minds,” he added, pointing his finger to his forehead.

For the summer, Bazi wants to expand the range of courses his camp has to offer, including Spanish and Italian classes. When asked if his project was long-term, Bazi replied that even though he never shares his opinion with his guests, he was prepared for the eventuality that they would stay “at least 15 years.”