A newly passed Iranian law outlawing vasectomy and sterilization could be a return to punitive policies aimed at encouraging population growth. 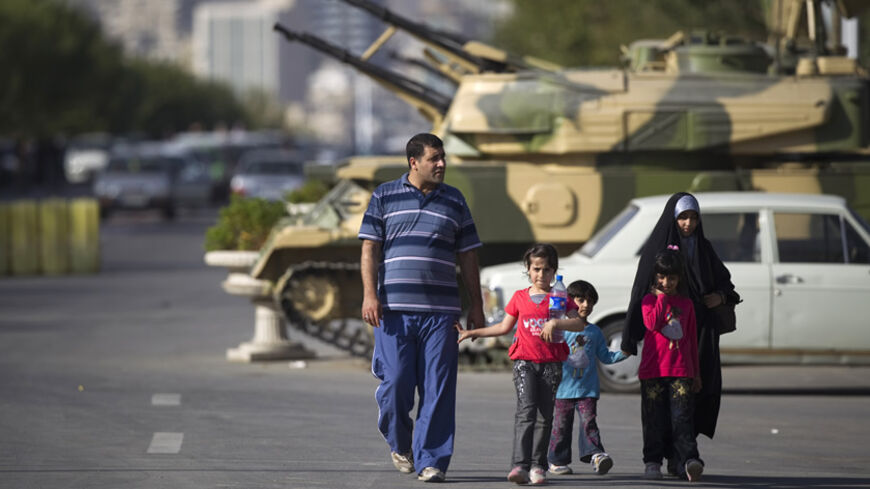 An Iranian family walk in a park near the Holy Defense Museum in northern Tehran, Oct. 14, 2011. - REUTERS/Morteza Nikoubazl

Recent comments by Iranian officials are a clear indication that there is a sense of absolute confusion among politicians with regard to population policies.

Previous policies in this field represent a roller coaster over the past three decades. Initially, after 1979, birth control policies were discontinued as they were seen as a Western tool to keep the populations of developing countries like Iran low. In the late 1980s, when the country was faced with one of the fastest population growth rates in the world, the government introduced birth control policies to contain the uncontrolled growth. In fact, the country succeeded in reducing the population growth from its peak of more than 3% in the 1980s, to some 1.5% by the late 1990s.

As a result, by the early 2000s, the country faced a challenging and young demography, with more than 50% of Iranians being under the age of 18. The socioeconomic consequences of the demographic profile and the need for job creation were among the key challenges. Nonetheless, by the mid 2000s, government officials began to worry about the projection of the country’s population into the next decades due to lower than expected fertility rates, as well as socioeconomic tendencies among young women who preferred to study and develop a career as opposed to establishing families.

The emerging crisis compelled Mahmoud Ahmadinejad's government to legally commit to paying families for every new child. Ahmadinejad even eliminated the “population control” budget of the Ministry of Health and Medical Education. Consequently, all efforts by the ministry to increase family health and educate parents about birth control were forcibly discontinued.

Realizing that the country would face an older population in the future, in 2012, the Expediency Council was asked by Supreme Leader Ayatollah Ali Khamenei to develop a set of policies that would promote population growth. The related decree, approved and signed in May 2014, included the following statements:

The decree by the top leadership focused on promotional policies to increase fertility rates and population growth. Nonetheless, last week, the Iranian parliament passed a law that would make sterilization and vasectomies illegal, i.e., an approach based on restrictions and punishments rather than education and promotion of new values. The new law foresees prison sentences of two to five years for anyone engaging in sterilization or other types of reducing fertility.

The responses from experts were quick. Head of the Iranian Association of Population Studies, Mohammad Mirzaee, said this law was in direct conflict with the population policies promoted by Khamenei.

Furthermore, Mohammad Esmail Motlagh, director-general of family health in the Ministry of Health stated, “It is necessary that the parliamentarians observe the population policies by the supreme leader when passing laws, as those policies are focused on the health of the mother and child.”

Public opinion and expert reactions to this law were so vast that the Iranian parliament reviewed its harsh approach to vasectomy. Abbas Salahi, member of the social commission in the parliament, said, “The law does not include punishment and threats and it is only designed to encourage higher fertility without any threat to imprison anyone.”

While parliamentarians have demonstrated their inability to understand the real reasons for the country’s socioeconomic developments, there is a healthy debate among experts and technocrats to offer workable solutions.

A central point in the decree issued by Khamenei is the need to enable the youth “to afford the cost of living.” In fact, high cost of living, inflation, unemployment, smaller housing units and other socioeconomic challenges present serious obstacles to the establishment of families in Iran. Even among the social classes that can afford to get married and have children, sociopolitical restrictions compel young couples not to have children.

Ali Jannati, the outspoken minister of culture and Islamic guidance, stated during a July 4 conference in Tehran: “We have deep concerns about the future of the country, about the economic conditions, millions of unemployed youth who cannot get married and who cannot afford to have proper housing — all these phenomena lead to social corruption, which is on the rise. Thefts have increased, the age of prostitution has fallen and the foundation of families is endangered.”

Evidently, the proper response to such social realities is not to introduce new restrictions, but to work toward greater socioeconomic liberties and opportunities. Experts agree that a more restrictive approach to birth control will increase social costs on other levels, i.e., a potential growth in secretive abortions or a growth in sexually transmitted infections, including HIV/AIDS.

Consequently, Iranian policymakers need to fully understand the costs and benefits of each potential path. The experience of developed countries has shown that an aging population will present a country with many challenges, especially in social security matters. However, population growth policies as Iran is planning them will not necessarily lead to a balanced demography, especially as long as critical socioeconomic and sociopolitical freedoms are restricted because of an ideological approach to social matters.

There are several successful examples of countries that have increased fertility rates and reversed population growth patterns. For example, in 2005, South Korea passed a law providing a basic legal framework for a new pronatalist policy. The plan included provisions to provide a more favorable environment for childbearing, including a long list of measures such as tax incentives, priority for the purchase of a new apartment, support for child care (including a 30% increase in facilities), child care facilities at work, support for education and assistance to infertile couples.

Such measures are also feasible in Iran, though the government has to be careful not to put too much of the burden on the business community or society. As such, the Iranian government should look at other successful approaches, push back against restrictive measures and use the decree by the top leadership to implement a number of reforms that will empower the youth economically and socially and pave the way for a healthier path of socioeconomic development in the country.