On the anniversary of the downing of Iran’s Flight 655 by the United States, Iran still mourns the act of violence that played a major role in US-Iran hostility. 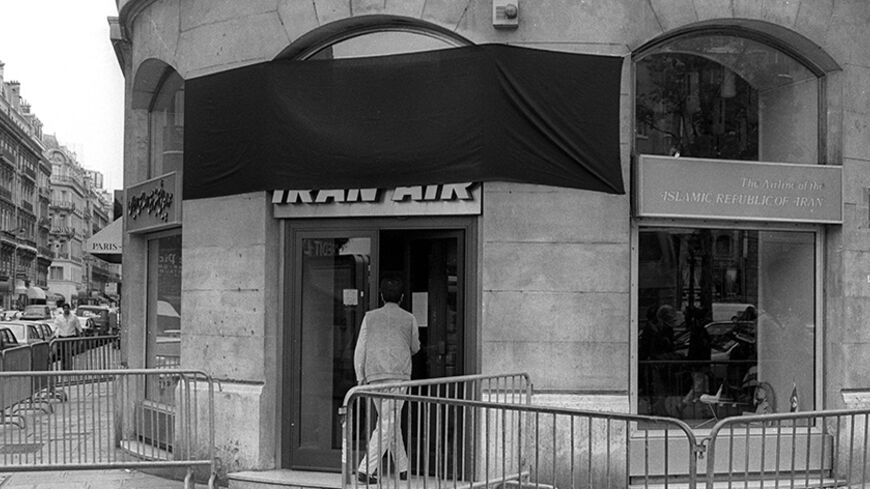 The Paris office of Iran Air is draped with a black shroud following the downing of an Iran Air A-300 Airbus with 290 passengers aboard in the Gulf, July 7, 1988. - REUTERS/Phillipe Wojazer
Arash Karami
@@thekarami
July 3, 2014

On July 3, 1988, a US Navy ship shot down an Iranian passenger plane in the Persian Gulf, killing all 290 people on board. Among the dead were citizens of Iran, the United Arab Emirates, India, Pakistan, Yugoslavia and Italy, including 66 children.

The downing of Flight 655 by the USS Vincennes with two surface-to-air missiles has been mostly forgotten in the United States. However, partly due to its timing, it has played a major role in shaping Iranian officials' view of US policy toward Iran.

On his English-language Twitter account, Iran’s Supreme Leader Ayatollah Ali Khamenei shared pictures and messages commemorating the anniversary of Flight 655. “If the commander of the warship made a mistake, why did you not bring him to trial? Why did you give him a medal of honor?” one tweet read. The ship's crew were awarded medals for their service. Another tweet contained the hashtags #NeverForget and #NeverForgive.

Mehr News Agency used the occasion of the anniversary to interview producer Ghassem Golipour about a film he is working on about the downing of the flight. “I believe this film script has the power that, once it’s made, it can turn the American people against their officials,” Golipour said. He continued, “Making this film on the international stage not only will study and criticize US policy, but question the years of silence of international institutions who claim to support human rights.”

Iranian Students’ News Agency (ISNA) interviewed Hesamoldin Ansarian, who was 12 years old when he was to accompany his father on Flight 655 but decided not to at the last minute. Ansarian, now a known photographer in the region, recounted the details of how he decided not to travel to Dubai with his father, who made the trip for medical reasons. He said that the entire Iranian the port city of Bandar Abbas was left in mourning after news of the tragedy spread.

According to ISNA, a documentary film about Flight 655 called “Sunday Morning Flight” will air July 3 on Iran’s Channel 1.

The United States claimed that the Airbus A300 was mistaken for an F-14 fighter jet shortly after it took off from Bandar Abbas headed for Dubai. Iran has never accepted this story. The downing of the plane came at a critical time during the Iran-Iraq war, which had been raging for eight years. US ships had been monitoring the oil trade routes in the Persian Gulf. Before the incident, Iranian boats and US ships had been involved in minor altercations.

Iran took the attack as a message from the United States that it had decided to take direct military action on behalf of Iraq. While the United States had supported Iraqi leader Saddam Hussein during the war, even giving Iraq the positions of Iranians, knowing that chemical weapons would be used against them, there has been no evidence that the attack was the result of US policy to engage Iran militarily. And while there were many other, more immediate reasons the war ended, many observers point to this event as one of the main factors resulting in Iran agreeing to a cease-fire.

by Murielle KASPRZAK and Joseph SCHMID | AFP | May 26, 2022
END_OF_DOCUMENT_TOKEN_TO_BE_REPLACED