The murder of the three Israeli youths has led extremist groups to call for revenge over social media. 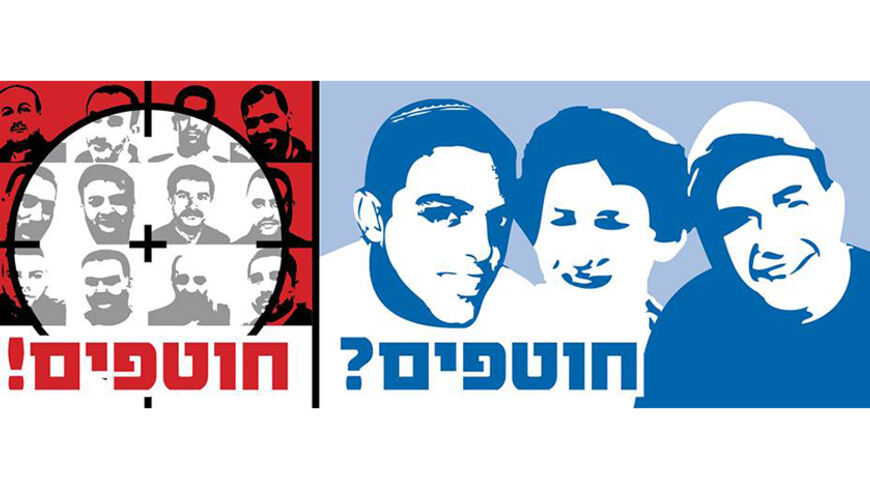 A screenshot from the Facebook group "Until the boys are back, every hour we shoot a terrorist." - Facebook/lehaselmehabel

For years it seemed as if the bitter dispute between the Israeli right and left had been on a long hiatus. Well, it’s back now, in a big way. In the last Knesset elections in January 2013, the debate over Israel’s borders and the country’s relationship to its Palestinian neighbors made way for a completely different agenda. Issues like the cost of living, social justice and sharing the burden between the secular and ultra-Orthodox sectors took center stage in Israel. Finance Minister Yair Lapid caught this wave and within just a few weeks, he went from television host to the head of the country’s second-largest party.

Over the past few weeks, however, and especially since the murder of the three teens, the political climate in Israel has gone sour, and the debate between left and right has taken a sharp turn into dangerous territory. Today's toxic spectacles are reminiscent of the days of mass demonstrations, with their palpable expressions of hatred and blatant incitement.

This time, however, the social networks have also entered the picture. In combination with the demonstrations in the cities’ squares and the seething rage on the street, they have raised real fear among the public and the political establishment alike about what might happen next.

Within hours of the announcement that the bodies of the three teens had been found, tens of thousands of people flooded the Internet, pointing out the direction they thought the country should take. Almost all the new groups that appeared online called for revenge. The most prominent of them was “The People of Israel Demand Revenge.” Within minutes, tens of thousands of people joined the group, driven by its call to hurt the Palestinians as punishment for the act of terror. In that tense atmosphere, Internet users had no qualms about showing their faces to everyone. There were soldiers, young men and women and adults, all of whom took photos of themselves holding makeshift signs demanding that the blood of the three teens be avenged. Some of the signs were brusque and violent.

The people behind the group explained that they have no intention of taking revenge on the innocent. “We are as far right as you can get, in our opinions,” they wrote in a post to the site, “But our goal is to avenge and to capture the terrorists who kidnapped those boys, so that we can wreak our vengeance on them.” The site disappeared from Facebook a day after it appeared (here is a cached version), but many new sites under similar names replaced it.

The state is prepared to deal with open manifestations of racism, but it cannot deal with the flood of racist invective that is overwhelming the Internet, nor has the army gotten to the soldiers carrying signs calling for revenge. On July 2, the Ministry of Justice released a statement saying that it takes such incitement against both Jews and Arabs seriously. So now everybody can calm down.

“A flame has fallen on the cedars …”

The Bnei Akiva youth movement is considered the crown jewel of the national-religious community. For almost a century, the movement has been instilling its values in hundreds of thousands of religious boys and girls, guiding them on the path of an optimal balance between modern life and religious faith. The creation of the State of Israel offered them a chance to combine forces in a bold attempt to forge bonds of peaceful coexistence between the two. The movement, like other, mostly secular movements, earned considerable esteem for teaching its charges to build a model society in Israel for secular and religious Jews alike.

The name of the movement is derived from the historical Rabbi Akiva, who represented to many the ideal blend of study and action. But something happened to this movement. Following the murder of the boys, the spiritual leader of the movement, Rabbi Noam Perel, called for revenge over Facebook as well. “An entire nation and thousands of years of history demand revenge,” he wrote. “The landlord has gone mad at the sight of his sons' bodies. [We want] a government that turns the army of searchers to an army of avengers. … The disgrace will be paid for with the blood of the enemy, not with our tears.”

In an interview with Kippah, the rabbi added that he wasn’t saying anything new. He said the underground movements before the creation of Israel and also Israel Defense Forces (IDF) soldiers after it maintained a policy avenging any attacks against Jews.

Perel’s passion for vengeance, biblical in its proportions, sent shock waves through people affiliated with the Bnei Akiva movement. They had always aspired to portray the movement as teaching values diametrically opposed to those being advocated by Perel. But now they suddenly found themselves in the same boat, bobbing on the waves of racist invective. Perel removed his comments from Facebook in response to all the pressure, but he also told his friends that those views continue to reflect his true opinions.

The silence of the left

It took two days of paralyzed silence before the left-wing parties and peace movements came out of the closets in which they’d been hiding for the past few weeks. Those who publicly advocated for peaceful solutions to the Palestinian-Israeli conflict found themselves in a quandary as a result of the kidnapping and murder of the three teens. Supporters of the right seized the street, never missing an opportunity to shout their demands for revenge. Ministers and members of the Knesset spearheaded the incitement without anyone calling them out for it. The Likud and HaBayit HaYehudi are two of the parties that are now in power, but they acted as if they had nothing to do with the policies that led to the desperate circumstances now defining the relationship between Israel and the Palestinians.

“Don’t abandon me,” then-Prime Minister Yitzhak Rabin called to his colleagues in the Labor Party when the country was overrun by right-wing demonstrations and riots to protest the Oslo Accord. It was against this backdrop that the massive peace demonstration was organized in Malchei Yisrael Square of Tel Aviv in November 1995. For the first time in a very long while, Rabin felt that he was not alone in his struggle for peace. Immediately after the demonstration was over, Rabin died from an assassin’s bullet.

The feeling now is quite similar. For years, the left and the various peace organizations have been stuck in the opposition, but incitement against them continues as if they had always been in power. Once again, the walls are covered with slogans denouncing the left, the nongovernmental organization Peace Now, the United States, Europe, Arabs, Palestinians and just about everyone else.

Prime Minister Benjamin Netanyahu has yet to speak a word against this incitement in the streets, just as has President Shimon Peres and the members of the Cabinet. Not even the country’s writers, poets and intellectuals have spoken out. It seems as if the murder has completely paralyzed them all. A feeling of helplessness has taken over the country ever since the kidnapping.

Newly elected President Reuven Rivlin expressed on July 3 his concern over the loss of control in the country and warned of a situation in which everyone acts as he sees fit. The harsh words and escalation we witnessed these past few days risk driving the country into a state of chaos if the incitement is not stopped promptly.