What should West expect from Erdogan as president?

The United States and others in the West are speculating about what Turkish foreign policy might look like under President Recep Tayyip Erdogan, whose nomination speech left no doubt about his strong Islamic inclinations. 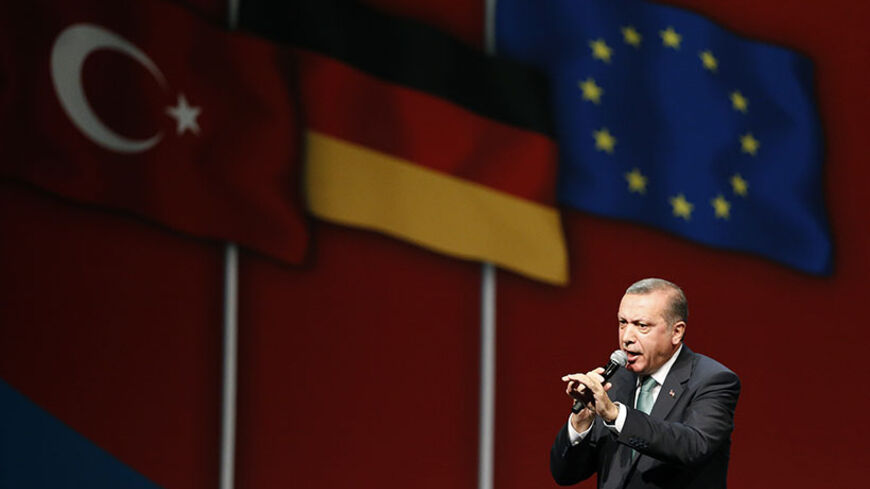 Prime Minister Recep Tayyip Erdogan’s nomination as the ruling Justice and Development Party (AKP) candidate for president has spurred speculation about Turkey’s foreign policy under an Erdogan presidency should he win as expected.

Taken at face value, Erdogan’s nomination speech on July 1 provides reasons for concern in this regard when evaluated from a Western perspective, revealing that his Islamist inclinations remain as strong as ever. Praising Allah as the one "who brought this cause, this movement, this struggle to the present day,” Erdogan said he had also pursued his political goals until now for the sake of the downtrodden people of Palestine, Egypt, Somalia and Afghanistan.

The only reference to ties with the West in his long speech — which was laced with heavy Islamic terminology and historic imagery as well as negative references to the Egyptian and Syrian regimes — was a passing remark about working harder as president to make Turkey a member of the European Union.

This isolated reference, embedded deep in his speech, did little to change its overbearingly Islamic tone. It also appeared to have been uttered merely for the sake of diplomatic correctness, rather than reflecting any genuine commitment, which Erdogan provided no indication as to how he intended to pursue.

If he had done so, it would also have provided evidence for how committed he remains to Turkey’s historic Western orientation. To the contrary, he hit hard at the Western-oriented Kemalist and secular political classes that governed Turkey for decades prior to the AKP's reign.

Much more significantly, however, Erdogan appeared to be castigating Turkey’s Western orientation, not just in the republican era but also during the Ottoman period. “For 200 years, they tried to tear us away from our history and from our ancestors. They tried to get us to disown our claim,” he declared angrily, clearly suggesting that his presidency would put an end to those efforts.

His remark, which raised eyebrows in Turkey’s secular quarters, harkens back to the end of the 18th century, when the groundwork for the first modern and secular reforms along Western lines started to be laid by Ottoman rulers, culminating in the “Tanzimat” or “Reorganization” era starting from the middle of the 19th century.

Erdogan also promised to advance democracy in Turkey, but doubts remain in the West today on this score given his track record. The topic remains the cause of tension between Ankara and the West, where Erdogan has a negative image from what is seen as his authoritarian leanings, which belie his claims of advancing democracy.

This was also apparent during this columnist’s talks in Strasbourg this week, after Erdogan’s nomination was announced, with members of the newly elected European Parliament.

Richard Howitt, a veteran of the European Parliament and a member of its Social Democratic group who has been involved in Turkey for many years, voiced serious concerns about continuing press freedom issues in Turkey and the brutal way the Erdogan government suppressed last summer’s Gezi Park protests.

Ismail Ertug, a German deputy of Turkish origin and also a member of the Social Democratic group, declared that Erdogan appears “roughshod and crude” to European politicians in his approach to social issues.

Judging by his remarks during his nomination speech, Erdogan also remains ambitious about making Turkey a leader in the Islamic world. This can be expected to reignite the debate in Europe and the United States about where he will steer Turkey as president.

Unless he works to alter the image he has secured for himself as a short-tempered and divisive politician with scant regard for basic democratic values, Turkey’s ties with Europe will remain uneasy under his presidency.

The same applies to Turkey’s ties with the United States, which nevertheless remain strategically important for both sides. Erdogan’s undemocratic steps at home and his barely veiled accusations of a US-Israeli/Jewish-led conspiracy against him and his party have clearly marred the relationship.

Diplomats from the two countries continue to underline the fact that Ankara and Washington are working closely today on tough regional issues of mutual interest, like Iraq and Syria. But it is evident from statements by Washington about Erdogan’s accusations and anti-democratic steps that there is little love lost between him and members of the US administration.

Notwithstanding Erdogan’s regional leadership ambitions, developments in the Middle East have resulted in one dismal diplomatic failure for Ankara after another due to a series of miscalculations following the Arab Spring. Today, Erdogan is even less welcome in the region, which he has not visited for some time now, than he is in Europe or the United States. This is increasingly forcing Ankara into working closely once again with the West in general and the United States and NATO in particular, especially on security issues, on account of the unexpected security threats that have emerged for Turkey as a result of the turmoil in Iraq and Syria.

The heavily Islamic tone of his presidential nomination speech was therefore more likely to have had a domestic rather than a foreign audience in mind, aimed at his grass-roots followers, rather than indicative of a new trend in Turkey’s foreign policy orientation.

In the end, such events have been driving Turkey’s policies in its region for some time now, and this situation is not expected to change in the near future, even under Erdogan as president. Put another way, he will find as president that his regional leadership pretensions can only go so far before they come up against the hard rocks that reality strews on his path.

In the meantime, it is clear that Erdogan’s plans for the Middle East have not materialized and are not likely to do so anytime soon. The bitter irony for him today is that governments in the Middle East are less tolerant of him than those in the West. This is also due to the fact that, unlike in the West there are few strategic considerations that they have to factor Turkey into. To the contrary, most of the regimes in the region are deeply dissatisfied with what they see as intrusive and divisive meddling by Erdogan in regional politics, and they would rather him keep his distance.

Erdogan’s strong support for the Muslim Brotherhood may have him gained much respect on the Arab street, but did not enhance his standing with most of the regimes in the Middle East that clearly hate the Brotherhood and its supporters.

Erdogan, therefore, has little choice but to continue relying on Turkey’s strategic ties with the West, given that he has nowhere else to turn as his ties with key governments and regimes in the region remain dysfunctional. He will most likely also continue to be tolerated by Western governments for the sake of their strategic interests in Turkey, despite their antipathy for him.

The exception will come, of course, if he crosses the line in an unacceptable manner. Until then, the West is accustomed to his ways. The assumption is that Turkey’s important but equally dangerous geopolitical position on the map will ultimately have a moderating effect on Erdogan, too.

In summary, one can say that although Erdogan continues to harbor ambitions of becoming a regional leader who can stand up to the West for the sake of downtrodden Islamic masses, and although he can be expected to remain a confrontational figure as president, he is more likely to be led by events than to be a leader who directs them.