Would Turkey accept a Kurdish state?

As the likelihood of an independent Kurdish state on Turkey’s eastern border grows, Ankara is losing its historical resistance to the idea. 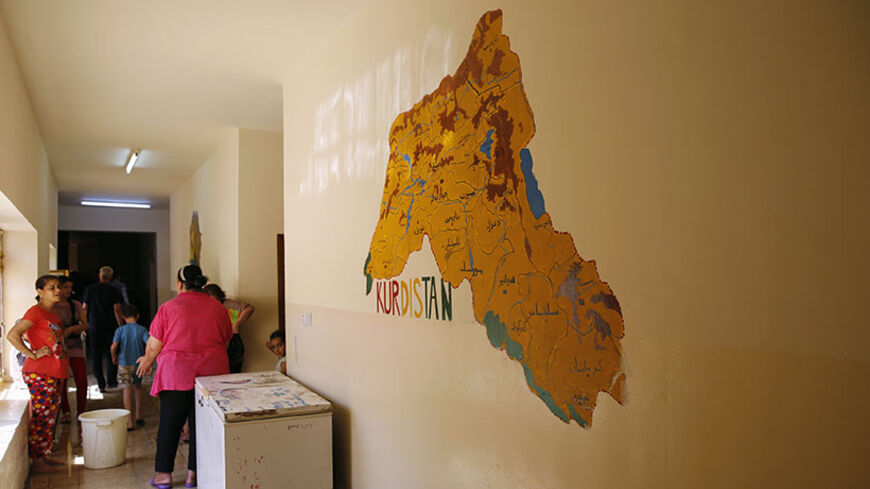 A map of the Kurdistan region is seen on the wall of a school in Erbil, where people fleeing violence in Mosul are staying, June 27, 2014. - REUTERS/Ahmed Jadallah

Developments in Iraq have left Turkey facing the prospect of an independent Kurdish state on its eastern border. Such an idea would have been abhorrent for Turkey a mere decade ago for fear that its existence would incite separation among its own restive Kurds. The standard Turkish narrative at the time was that an independent Kurdistan was a Western project aimed at destroying Turkey, an age-old ambition. Even the 2003 US invasion of Iraq was viewed in this context by many. The picture is no longer so black and white.

Today, the tables have turned, and Washington is accusing Ankara of exacerbating divisions in Iraq by developing independent ties with the Kurdistan Regional Government (KRG) over Baghdad’s head, especially in the strategic energy field. Turkey’s official preference is still a unified Iraq and as Cengiz Candar noted, one can deduce from recent remarks by Prime Minister Recep Tayyip Erdogan and US Secretary of State John Kerry that the positions of the US and Turkish governments converge in this regard.

There are strong indications, however, that Ankara may be resigning itself to the idea of an independent Kurdish state, as maintaining Iraq’s unity is becoming more difficult after the recent advances made by the Islamic State of Iraq and al-Sham. Recent remarks by government spokesman Huseyin Celik, one of Erdogan’s closest associates in the ruling Justice and Development Party (AKP), reflect this shift.

Celik was quoted on June 27 in the Financial Times as saying that an independent Kurdish state may have been a reason for Turkey to go to war in the past, but no one has the right to say this now. “In Turkey, even the word 'Kurdistan' makes people nervous, but their name is Kurdistan,” he said, adding that if Iraq were to be divided, Turkey would look on the Kurds as brothers. “Unfortunately, the situation in Iraq is not good and it looks like it is going to be divided,” Celik said, blaming Iraqi Prime Minister Nouri al-Maliki for bringing matters to this point. He nevertheless indicated that an independent Kurdish state was not Turkey’s “No. 1 choice.”

Celik’s remarks coincided with similar statements from the Israeli government. "Iraq is breaking up before our eyes and it would appear that the creation of an independent Kurdish state is a foregone conclusion," Israeli Foreign Minister Avigdor Liberman's spokesman quoted him as telling Kerry when the two met in Paris on June 26. Prime Minister Benjamin Netanyahu also weighed in during a June 29 address at Tel Aviv University, saying, "We should … support the Kurdish aspiration for independence," and adding that the Kurds had proven their political commitment and moderation and therefore “deserve political independence."

There are those in Ankara who feel that if Iraq is divided, and an independent Kurdish state is established, it may not be such a bad thing for Turkey. One such person is Murat Ozcelik, who was appointed the Erdogan government’s special envoy to Iraq in 2007 and in 2009 became Turkey’s ambassador to Baghdad, where he remained until 2011.

Ozcelik is now retired but remains active as a consultant on Iraqi affairs and is a frequent panelist at international conferences on Iraq. In an interview he told Al-Monitor that it is unlikely the Iraqi Kurds will work with Maliki and his Islamic Dawa Party at this stage because of what appear to be insurmountable disagreements between them. Ozcelik pointed to the disputes over the national budget, the sharing of Iraq’s oil wealth, and the question of who controls the oil-rich city of Kirkuk as some of the principal stumbling blocks. “From now on, the way forward for the Kurds seems to be either a loose confederation with Baghdad or separation from Iraq,” he said.

When asked what an independent Kurdistan would mean for Turkey, given its own large and restive Kurdish minority, and for Turkmen in Kurdish-controlled areas of Iraq, whose fate is a sensitive issue for nationalist Turks, Ozcelik responded, “Firstly it would mean that the kind of uncertainty that exists today for Turkey would no longer prevail. As for the Turkmen, Turkey can use its influence with the Kurds to secure rights for them in Kurdish-controlled areas. Remember that the Turkmen suffered more under the Arabs than Kurds in the past.” He added, “If Turkey can establish a system that satisfies its own Kurds, I don’t think they will lean toward an independent Kurdistan. In that event, both sides, Turkey and the Kurds, will be happy, and there will be no problems.”

There are clearly members of the ruling AKP who share Ozcelik's views and believe that an independent Kurdistan, notwithstanding the important energy partner it is developing into, would also be a buffer between Turkey and the rest of Iraq. Many in Ankara are predicting that Iraq is in for a prolonged conflict along sectarian lines that will also be fueled by the situation in Syria.

It is noteworthy that the Erdogan government has introduced a draft bill that aims to establish a legal framework for talks with the outlawed Kurdistan Workers Party (PKK) and to enhance unity between Kurds and Turks in Turkey. The picture is not so simple for the AKP, however, as there are considerations that leave members of the Erdogan government of two minds about an independent Kurdistan. The biggest concern is over a potential backlash from Turkish nationalist quarters. This faction remains vehemently opposed to the government’s Kurdish opening, to its talks with the PKK and to Turkey’s growing ties with the KRG. It goes without saying that it also remains opposed to the idea of an independent Kurdish state bordering Turkey.

Turkish nationalists continue to believe that such a state is a project inspired by the United States and Israel and aimed ultimately at undermining Turkey. The keenness Israel is displaying for an independent Kurdistan only adds grist to their mill.

Many nationalists, who also promote conservative Islamic values, have given Erdogan the benefit of the doubt and voted for him and the AKP in the past. They are expected to do so again in the August presidential elections, which Erdogan is expected to win. The worry for AKP leaders is that if things go seriously awry in Iraq for Turkey, especially with regard to the Kurds in the months after that, it could be a negative for the AKP in the general elections planned for 2015.

There are also concerns in Ankara that ties with an independent Kurdistan will alienate Turkey further from the Arab world, with which it already has serious problems. Another point of uncertainty concerns Washington’s reaction in this context, given that it is already opposed to Turkey’s independent ties with the KRG.

It is, however, developments in Iraq that have gained new momentum and that will serve as midwife for an independent Kurdistan if such should materialize. One could argue, therefore, that Ankara is only preparing for an eventuality it increasingly sees as imminent and trying to turn it to its advantage should it occur. Otherwise Turkey remains officially committed to maintaining Iraq’s unity.