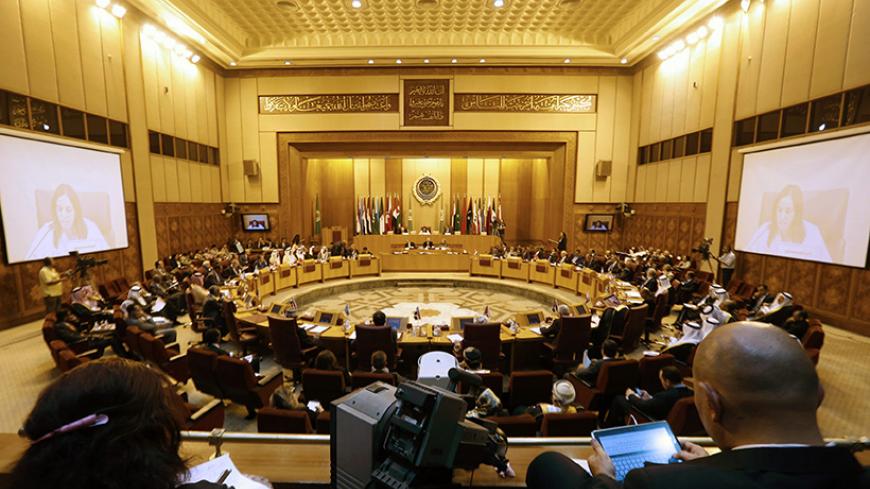 A general view shows an extraordinary session of the Arab League at the league's headquarters in Cairo, July 14, 2014. - REUTERS/Amr Abdallah Dalsh

Turkey is angry over Israel’s brutal operation in the Gaza Strip. Ankara, however, is marginalized in this crisis, unable to contribute to efforts aimed at ending the bloodshed. Meanwhile, the crisis is seen to be further fueling tensions between Turkey and Egypt.

Ties between the two countries are strained already over the military coup that toppled Egypt’s elected President Mohammed Morsi and his Muslim Brotherhood-dominated administration in July 2013.

Turkish Prime Minister Recep Tayyip Erdogan, an ardent supporter of the Muslim Brotherhood and Hamas, is infuriated over the role Egypt is playing in trying to broker a cease-fire in Gaza.

He is questioning Cairo’s role by arguing that Egypt is currently governed by a tyrant, and claiming that Egyptian President Abdel Fattah al-Sisi, who led the coup against Morsi and the Brotherhood, is merely using Gaza as a pretext to legitimize his rule.

“Sisi is not a party to this. He himself is a cruel perpetrator of a coup. He has blocked Hamas’ access to food and aid by closing the roads to Gaza,” Erdogan told reporters after attending Friday prayers on July 18. "Egypt is not a party. … They are trying to legitimize the administration in Egypt," he said.

Erdogan clearly cannot accept that Sisi, whom he has been constantly vilifying since the Egyptian coup, may play a leading role in Gaza. His claim that the Egyptian leader is merely seeking legitimization by using Gaza even forced some diplomats in Ankara to ask whether Erdogan is concerned more about undermining Sisi than about securing an early cease-fire in Gaza.

Such doubts follow Egyptian and Israeli claims that Turkey has sabotaged Cairo’s efforts at securing a cease-fire. Egypt’s Foreign Minister Sameh Shoukry told local news editors in Cairo on July 17 that Turkey, together with Qatar, was conspiring to undermine Egypt’s efforts. Israeli Foreign Minister Avigdor Liberman had made a similar claim earlier.

Ankara rejects these claims, but Erdogan has made apparent his opposition to any cease-fire worked out by Egypt, Israel and the Palestinian Authority (PA) over Hamas’ head. Erdogan has also been saying that any cease-fire deal has to include the lifting of the siege on Gaza.

This is also in line with Hamas’ position. The group’s political leader, Khaled Meshaal, was quoted by Al-Monitor on July 17 saying that Hamas rejected any cease-fire arrangement that excludes lifting the Gaza siege.

The Egyptian Foreign Ministry summoned Turkey’s charge d’affaires in Cairo on July 20 to protest Erdogan’s remarks about Sisi. A similar summons took place on June 3 when Cairo expressed displeasure with comments made by Turkish officials about the Egyptian presidential election.

Neither country is represented at the ambassadorial level since Egypt expelled the Turkish ambassador in November, accusing Ankara of interfering in its internal affairs. Cairo also refused to send its own ambassador, who had been recalled for consultations previously, back to Ankara.

Shoukry also reacted to Erdogan’s remarks questioning Sisi’s legitimacy in trying to broker a Gaza deal. He said these remarks “were out of keeping with diplomatic traditions, and totally unacceptable.” Shoukry said, “Erdogan’s behavior would not protect the blood of the people of Gaza.”

Most diplomats in Ankara sounded out by Al-Monitor believe Erdogan is rowing against a strong current if he thinks he can marginalize Egypt over Gaza. They say Sisi enjoys more international credibility in this crisis than Erdogan.

They also underline the fact that Palestinian President Mahmoud Abbas openly said, during his visit to Ankara last week, that the PA had asked Egypt to play a role in trying to secure a cease-fire in Gaza.

“Our Egyptian brothers embarked on this initiative on our request,” Abbas said during his press conference with President Abdullah Gul, in response to a question about Cairo’s present role in Gaza.

Ambassador Hazem Abu Shanab, a member of Fatah’s Revolutionary Council, for his part underlined in his interview with Al-Monitor’s Walaa Hussein, posted on July 18, that council leaders “reject any role by anyone, save that of Egypt, as mediator and sponsor of national Palestinian reconciliation or in the political process relating to the Palestinian cause.”

Hussein also cited an Arab League source, saying, “Talk about a Turkish initiative to replace that of Cairo is not a cause of concern to the Egyptians because they are confident that neither the Palestinian Authority, represented by Fatah, nor Israel will accept any alternative mediation at the present time.”

Saudi Arabia also dashed any hopes that Erdogan may have of marginalizing Sisi. Ahram Online reported on July 19 that Saudi King Abdullah bin Abdulaziz had given full support for the Gaza truce proposal made by Egypt.

More significantly, however, US Secretary of State John Kerry is currently in Cairo for talks with Sisi and members of his government in a fresh bid to try and secure a cease-fire in Gaza. This flurry of diplomatic activities shows it is Turkey that is on the margins of efforts concerning Gaza.

Yet, there may be a secondary role for Turkey to play, judging by remarks made to Al-Monitor by Shanab. Shanab pointed out that last week’s meeting between Erdogan and Abbas was aimed at taking “advantage of Turkish efforts and relations with the Hamas leaders, as well as to reach a unified Palestinian position in favor of the Egyptian initiative to put an end to Israeli aggression.”

According to this formulation, Ankara is expected to pressure Hamas to accept a cease-fire brokered by Cairo and Washington with support from the PA. Suggestions are also being made that Turkey could mediate between Hamas and Egypt.

But there are difficulties in both cases. Having gone out on a limb by not just opposing Egyptian efforts but also any cease-fire brokered over Hamas’ head, Erdogan will be loath to give any impression that he is pressing Hamas into a cease-fire it does not want to accept. As for mediating between Egypt and Hamas, Ankara has to have relatively good ties with Cairo and a neutral position between the sides to be able to do this, but does not.

It is more likely that Erdogan will prefer, in the lead-up to the presidential elections next month, which he is currently campaigning for, to keep hitting at Israel, Sisi, the United States, Europe and Arab governments, and support Hamas’ position, because this brings him support in Turkey, even if it contributes nothing to resolving the Gaza crisis.

But a final caveat has to be tossed in here. A delegation led by Ambassador Feridun Sinirlioglu, the undersecretary for the Turkish Foreign Ministry, flew to Washington on July 21 to “discuss current bilateral, regional and global issues," according to a ministry statement. Sinirlioglu planned to meet with senior counterparts from various agencies, notably the US Department of State and the National Security Council.

Given the growing frustration in Washington with Erdogan, some are speculating that Sinirlioglu’s mission is to explain to his US interlocutors what should and what should not be taken seriously at a time when Erdogan is on the campaign trail.

The implication is that Erdogan will change tack after he is elected president in a few weeks — as expected — because Ankara will want to break out of its regional isolation and regain the international influence it has lost. But given his by now familiar angry demeanor and unpredictable ways, this may be wishful thinking.

That aside, though, prospects for Turkish-Egyptian ties do not look promising for the foreseeable future.