Egyptian President Abdel Fattah al-Sisi appears to be achieving his objectives out of the Gaza-Israel war as Cairo steers cease-fire talks according to its interests. 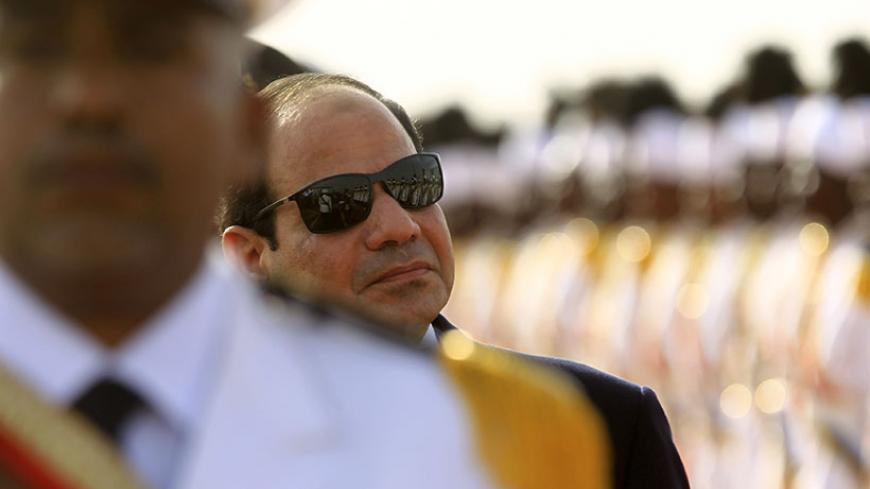 The Palestinian conflict has always been a trump card in the hands of whoever assumes the role of president in Egypt, but that has always been within a framework that the US administrations have created and managed. This is no longer the case, mainly due to the strategy that the current Egyptian administration employed in handling the Gaza crisis, which has unquestionably led to the prolonging of the conflict and increase in the number of casualties on both the Israeli and the Palestinian sides.

But it has also achieved every single one of President Abdel Fattah al-Sisi’s objectives, and subsequently changed the balance of power in the Middle East conflict. It sidelined Qatar, Turkey and Hamas; placed all the cards in the hands of Israel, the Gulf states and Egypt; and, none of them gave any weight to the Obama administration, which was unprecedented. As negotiations continue to take place in Cairo over the cease-fire that was finally achieved, so far the latest Gaza war has had one noticeable winner: Sisi.

It all started in the predictable manner. The Israeli security apparatus was getting more nervous at Hamas’ improved digging capabilities, with tunnels reaching hundreds of meters into Israeli territory that can be used by Palestinian militants to bypass the separation wall and carry out attacks in Israel. When three Israeli youths were kidnapped and killed, the Benjamin Netanyahu government used the incident as a pretext for an assault on the Gaza Strip. The Palestinian side predictably retaliated by firing rockets, and the usual dance of death between the two sides started in earnest once again, with both sides knowing how it will end: a weeklong bombardment, an Egyptian political intervention, the status quo reinstated. Unfortunately for all parties involved, things this time didn’t go as planned, and both sides, to their horror, started to realize that the situation has changed.

The Israelis quickly realized that the situation this time was not business as usual. For the first time, due to the targeting of the Ben Gurion International Airport — a major economic lifeline for geographically isolated Israel — by Hamas rockets, the US Federal Aviation Administration and most of their European counterparts placed a temporary ban on air travel to Israel. The bombardment of Gaza also led to the highly underreported West Bank clashes, whose death toll continues to climb despite the cease-fire. Added to this, Egypt decided to change the role it plays every single time this conflict erupts. For the past 30 years, whether under Hosni Mubarak or Mohammed Morsi, Egypt would quickly sponsor a cease-fire to bring any serious fighting to an end. It was one of Mubarak’s main uses to both the United States and Israel, and it is what elevated Morsi’s profile and international credibility in 2012. This was the role Sisi was supposed to play, and by scoring this foreign policy win, it would consequently give him the international credibility he sorely needs since his election. But Sisi didn’t follow the script.

When the conflict started, Sisi had a number of objectives he wanted to achieve:

To achieve all this, Sisi had to control the situation, which he would not be able to if anyone else had issued their own initiative for ending the conflict, while also distancing himself from Hamas, which meant he could not issue a proposal they would immediately agree to. Refusing to take the lead, or to follow someone else’s, he chose the third option: obstruction.

Sisi refused to open the Rafah border crossing, and then issued a cease-fire proposal unilaterally without discussing it with any of the conflict parties beforehand. It was one that he knew Hamas would turn down. Israel was caught off guard, with no other option than to support the proposal since they needed Egypt to handle the cease-fire, while Hamas’ expected refusal — due to Sisi's insistence on keeping the Rafah crossing closed — satisfied both his goals of not talking to them directly, while casting the blame of the continued conflict on them in the eyes of the Egyptian public. Israel, eager to quickly end the campaign and have Sisi start playing the mediating role with Hamas, increased the Gaza bombardment to pressure Hamas to agree, which Hamas refused, and in turn continued to launch their rockets in retaliation to Israel’s bombardment. The conflict reached a stalemate.

When US Secretary of State John Kerry arrived in Cairo on July 21, Sisi wanted him brought down to size, so he had him go through a security check before meeting with him. Kerry offered him international praise and legitimacy, but no new financial or armament commitments in exchange for amending the cease-fire agreement and talking with Hamas. When Kerry failed to negotiate a better deal with Sisi after five days of trying, he went to Turkey and Qatar for another cease-fire agreement, which not only irked Egypt, Israel and the Palestinian Authority (PA) but also the other Gulf states. They all shot it down, signaling the end of any influence or leverage Turkey or Qatar had in the conflict. Kerry left afterward, and did not participate in the talks of the cease-fire that happened without his brokerage.

Meanwhile, preparations for the Cairo talks were taking place, and Hamas had to acquiesce the role of top negotiating partner to the PA, and be part of a delegation led by them instead, since neither Israel nor Egypt wanted to negotiate with them and they needed the cease-fire to happen. By including Islamic Jihad in the delegation and giving them prominence, Hamas found itself neither the official representative of the Palestinians — that role was reclaimed by the PA — nor the sole representative of the militant factions on the ground, thanks to Islamic Jihad’s participation. To make matters worse for Hamas, they will be facing the sole responsibility in the eyes of Gaza’s residents for the damage that took place if they fail to make any tangible gains in the talks, which, under Egyptian mediation between the PA and Israel, are taking their sweet time. The cherry on top is that hosting the Cairo talks is giving Sisi the international legitimacy that Kerry offered him free of charge, all thanks to a cease-fire proposal he was never serious about.