While hotels, factories and small businesses in Israel are suffering in the current round of fighting, the Israeli "startup nation" is still flourishing. 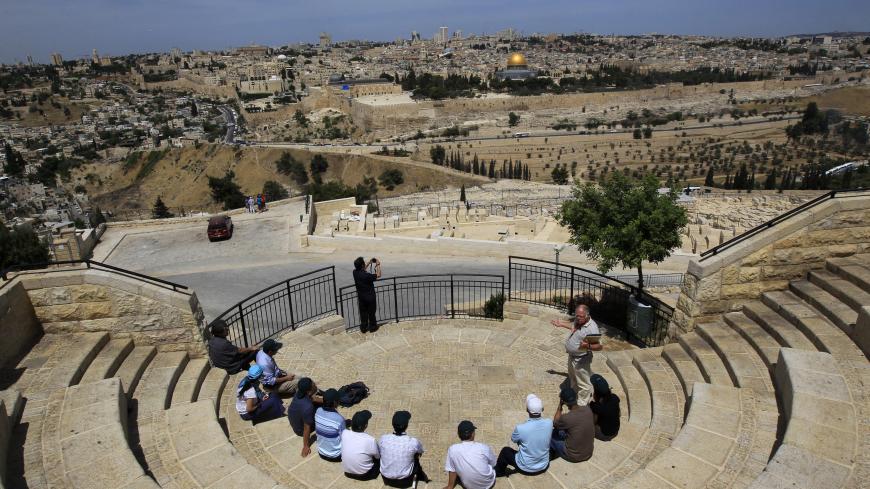 Tourists sit at a lookout point on the Mount of Olives, overlooking Jerusalem's Old City, May 25, 2011. - REUTERS/Ronen Zvulun

As the latest fighting between Israel and the Gaza Strip enters its 10th day on July 17, hundreds of rockets have been fired at Israel and hundreds of tons of explosives have been dropped on Gaza. There is still no solution. Though discussions on a cease-fire take place in the background, both parties are still searching for their own “victory image.” In the dire reality of endless sirens and concern for the welfare of the children during the summer break, the Israeli economy is trying to function normally and relay the sense of "business as usual."

And yet, when it comes to the local high-tech industry in the “startup nation,” it really is business as usual. Anyone perusing the high-tech sections of the local economic press would think the stories are taking place in some other country, and a tranquil, peaceful country at that. To illustrate this, here is a brief selection of headlines from the past few difficult days of the conflict: Neebula Systems from Hod HaSharon was sold to the American ServiceNow company for $100 million; Microsoft is in negotiations to purchase the Israeli cybersecurity firm Aorato; Israel’s JFrog raised $7 million from VMWare and Gemini; and Zooz — a company that deals with online payments — closed a $12 million round of funding.

Added to all this is a truly astounding figure: Israeli startups have managed to raise a record amount of funding, with 175 companies raising no less than $1.6 billion in the first half of 2014. The problem is, Israel’s economy, much to the chagrin of many, still does not begin and end with high-tech companies in the center of the country. Outside that flourishing greenhouse, the Israeli economy is paying an increasingly steep price each day the conflict continues. No one in those sectors is searching for some “victory image.” All they want is to get through another day and survive until the fighting is over and quiet returns to the region. And even then, in many cases it will take months before they overcome the damage they suffered.

A senior figure in the local tourism industry told Al-Monitor that until just a few days ago, 2014 was considered to be one of the most successful years on record in terms of the number of tourists arriving in the country. “But,” he added, “the year came to a close last week, as far as we are concerned, when the first missile was fired. We call it the ‘half a year lost.’”

Representatives of the tourism sector are talking about a wave of cancelations from tour groups and individuals for July, August and September — the three months in which the sector traditionally earns some 40% of its annual revenues. Current estimates say that direct damage to the hotel industry alone will amount to $60 million. Damage to the tourism industry as a whole is significantly higher. It is estimated that it will amount to approximately $300 million.

Other traditional branches of Israeli industry are also concerned about long-term repercussions from conflict. In some factories, particularly those in the south of Israel and in areas adjacent to the Gaza Strip, work is taking place in reduced shifts. Industrial organizations report that some 30% of all employees have not shown up for work and that there have been extensive stoppages on production lines because of the many alarms. Most of all, however, they report that orders have not gone out on time, and that clients are now preferring to place new orders with factories in countries that are a little quieter.

Having considerable experience in military conflicts of this sort, the Israeli government has established an effective and quick mechanism to provide compensation to factories that suffered as a result of the conflict. But these mechanisms know mostly how to compensate companies for the immediate damage caused by rocket fire. They are less effective in dealing with the long-term damage caused by the loss of customers or the failure to complete orders. In previous conflicts, factory owners were forced to contend with a complicated bureaucracy and had a lengthy wait before they received any compensation for damages to their reputation or the loss of customers, if they even received compensation at all.

Added to all this is the serious damage suffered by small and medium-sized businesses, particularly those involved in retail. The streets in many Israeli cities have been empty for hours. The situation for shops and businesses operating in those areas is hardly ideal. Here, the government is trying to help by postponing when taxes are due, and the Bank of Israel has instructed banks not to freeze accounts that have exceeded their credit limits. Nevertheless, none of that is enough to compensate a business that has not had any customers for over a week.

The owners of businesses, people from the tourism industry and factory owners are not only left helpless in the face of the current situation. They also have no idea when things will get back to normal. They can only look with envy at their fellow businessmen in high-tech industries. The former are suffering. They are choking and struggling just to survive another day, all the while hoping that their businesses do not collapse entirely. Meanwhile, the latter continue their race "to exit" — the purchase of a startup by a big company — while raising capital as if nothing is happening around them.

Even under normal circumstances, it seems as if the Israeli “startup nation” is cut off from the world around it in terms of the wages it pays, the growth it exhibits and a whole slew of other parameters. Now, however, after the events of the past few days, the “startup nation” can officially be declared an independent state, cut off from the rest of Israel and oblivious to what is happening in it.