Israel did not rightly assess Hamas’ military abilities and must henceforth stop considering it as terror cells, like the other Gaza Strip groups, but as an army that it should aspire to bring down. 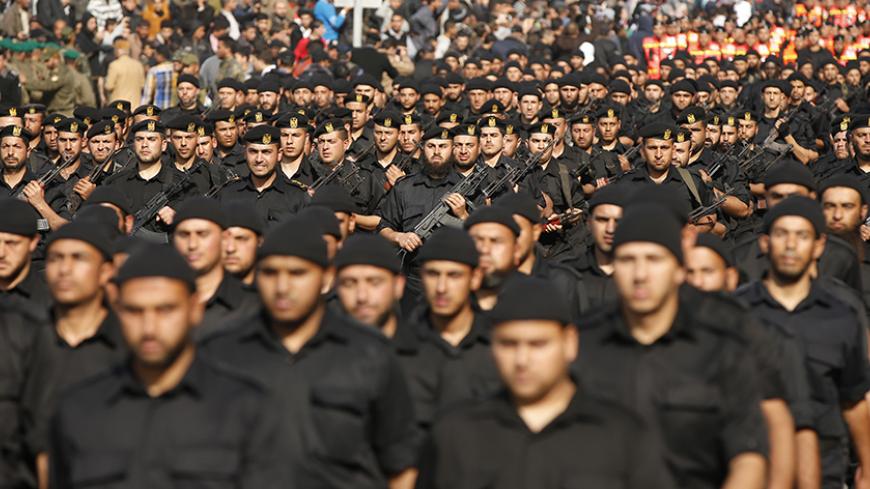 Members of the Palestinian security forces loyal to Hamas take part in a parade marking the fifth anniversary of the three-week offensive Israel launched in 2008-2009, in Gaza City, Jan. 13, 2014. - REUTERS/Mohammed Salem

In recent years, two narratives developed in Israel regarding its face-off against the Hamas movement. According to the first one, Hamas is a terrorist organization and, therefore, classic anti-terror tactics must be used to fight it. The second narrative, formed after Hamas took over the Gaza Strip in 2007, holds that Israel must create a balance of military and economic terror against the organization and erect clear red lines. Only if those lines are crossed by Hamas should Israel begin action to destroy the organization.

In general, Israeli governments adopted relatively restrained policies of containment vis-a-vis Hamas. The reason for this was the assumption that should the Hamas regime be overturned militarily or collapse economically, the alternative regimes in the Gaza Strip could be much worse and much more dangerous to the security of Israel. Operation Protective Edge already proves that both narratives are no longer applicable.

The Hamas movement was founded six days after the eruption of the first intifada at the end of 1987. The first terrorist acts of the military wing were perpetrated by the “101 Unit” established in the Jabaliya refugee camp in the Gaza Strip. Its people abducted and murdered Israel Defense Forces (IDF) soldiers Avi Sasportas (February 1989) and Ilan Saadon (May 1989), and concealed their bodies.

Hamas’ terrorist acts became more deadly and murderous after the signing of the Oslo Accord between Israel and the PLO in 1993. Hamas attempted to subvert the agreement with terrorist attacks by suicide bombers. The height of suicide terrorism was reached in the second intifada in 2000, when the State of Israel was inundated by a wave of attacks that were directed mainly against civilians. Hamas’ military wing then adopted the suicide attack model of Hezbollah. Small, compartmentalized terror cells acted independently to plan attacks and send terrorists to blow themselves up in shopping centers and buses in Israel’s major cities.

After the disengagement from the Gaza Strip (August 2005), the movement underwent a strategic change: From small terror cells, it developed into a real army. Hamas became an organization of uniform wearers whose daily pursuit was military; they were trained according to the doctrine of a recruited army. They underwent weapons training and developed excellent military skills, together with religious indoctrination to strengthen their faith and adherence to the jihadist cause. Thus, in effect, Hamas created the first Palestinian army.

It is believed that the Hamas army drafted between 15,000 and 20,000 men, divided into three geographic brigades in the north, center and south of the Gaza Strip. At the same time, it also established elite units for special, localized operations. During the current Protective Edge operation, these units were tasked with implementing the combat doctrine they had acquired throughout the years: to infiltrate Israeli territory through underground tunnels and attack army bases or civilian population centers. Each unit numbers between 10 and 15 fighters who know that their chances of surviving any such military operation are very small. In effect, these are suicide missions. Hundreds of Hamas soldiers were trained according to this combat doctrine during recent years, mainly after the Pillar of Defense operation and as part of the organization’s subsequent preparations for the next round.

A Hamas unit that infiltrated Israeli territory July 21 near Kibbutz Nir Am succeeded in firing an anti-tank missile at an IDF jeep that killed Lt. Col. Dolev Keidar (regiment commander of the IDF’s officer training school) and three soldiers who traveled with him. The assault was documented by cameras placed along the length of the border between Gaza and Israel; 10 armed terrorists wearing uniforms similar to IDF uniforms, including helmets and camouflage gear, were seen before they attacked the IDF jeep that approached them.

This filmed ambush displayed the abilities and expertise of Hamas fighters better than any propaganda video clip disseminated by Hamas. The footage clearly demonstrates that the IDF does not face terror cells this time, but a real army.

The two previous IDF operations in the Gaza Strip, Cast Lead and Pillar of Defense, took Hamas by surprise. This time, the organization painstakingly planned for this attack over years. In contrast, the IDF did not appropriately assess the scope of the threat of the underground tunnels.

We ask the question: Now that Hamas’ true dimensions and magnitude are apparent, does Israel still believe that it is best to endure the Hamas regime in Gaza as the lesser of evils? Is Hamas to be preferred over the unknown entities that would take its place?

When Israel talks about the “unknown” — meaning the entity that would take control of the Gaza Strip should Hamas be overturned or fall apart, and about the new threats it would bring with it — it mainly alludes to the Islamic State (IS). This Islamist organization has already succeeded in conquering cities in Iraq, and apparently is expanding to the Gaza Strip and to the Sinai Peninsula. It proclaims that its goal is to establish an Islamic state from Iraq to Syria.

But how is a Hamas army different than the fanatical organization that operates in Iraq? Both are fueled by religious belief in martyrdom designed to sanctify Allah's name, both have recruited armies that are well trained and display excellent military skills. Therefore, Israel should no longer view Hamas as the Gaza Strip’s de facto, default rulers. How can other Salafist organizations in Gaza, in addition to the Islamic Jihad and Popular Resistance Committees, threaten Israel more than Hamas?

Hamas operates mainly according to the utterances made by the members of the military wing. All of Gaza’s resources were mobilized on behalf of exaggerated armament and incredible underground protection. The IS cells, the Salafist organizations and Islamic Jihad do not have access to such tremendous financial resources. While Hamas has long been regarded as the default ruler of Gaza in Israel’ eyes, that does not have to be true any longer. Israel did not appropriately assess Hamas’ military abilities or, evidently, its intentions. Until the eruption of the current operation, many in Israel estimated that Hamas was in crisis and thus not interested in entering into conflict with Israel at this time.

Any cease-fire that will be declared between Israel and Hamas will be viewed as a victory by the Palestinian organization. Hamas will view it as a respite for reorganization, reconstruction and enlarging its recruited army for the next round of hostilities. Even destruction of the tunnels, as effective as that may be, will not destroy Hamas or its military wing. The Hamas command echelon, the heads of the military wing and the commanders of the Hamas brigades are still protected in their bunkers below Gaza, as are the leaders of the political wing.

But even if Israel still considers coming to terms with the existence and presence of the Hamas army in the Gaza Strip, one thing must be remembered: No other organization could be more violent or hazardous to the state of Israel’s security than Hamas.