Leaders of Hamas and Islamic Jihad are expressing confidence in the event of an all-out Israeli attack, while also exercising restraint to prevent a military escalation. 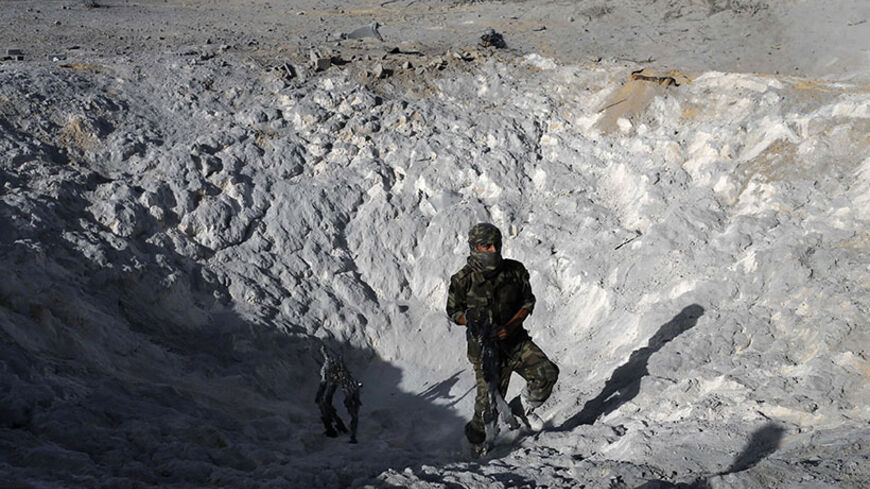 A Palestinian militant inspects a crater caused by what police said was an Israeli airstrike in Khan Yunis in the southern Gaza Strip, June 29, 2014.

GAZA CITY, Gaza Strip — Tensions were high in Gaza after the Israeli government's June 30 announcement of the discovery of the bodies of three kidnapped settlers. At dawn on July 1, Israeli warplanes launched more than 20 sorties, bombing 36 targets, including military sites and agricultural lands in the southern, central and northern Gaza Strip, injuring four civilians.

Among those hurt were Ataya al-Shaer, who works as a guard west of Khan Yunis in the settlement areas vacated by Israel in 2005. He told Al-Monitor, “We saw the aircraft and naval warships bombard the area from every direction. I went outside the guards’ room with two others, and we stayed in an empty agricultural area. We came back after half an hour, and this is when the room was bombed. Columns and walls fell over us, and we lost consciousness.”

Shaer sustained bruises all over his body, as did his colleague Suleiman Zourob, who also described their experience, “We spent more than an hour under the rubble, until the bombing stopped, and the neighbors from the region came to rescue us from under the ruins. We thought we were going to die, but God saved us,” Zourob said.

Also on July 1, Israeli Prime Minister Benjamin Netanyahu announced how his government intended to move against Hamas, which he blamed for the kidnapping. Netanyahu explained, “[The first task of the government is] to reach the murderers and all those who participated in the kidnapping. … [The second task is to] vigorously strike at Hamas members and infrastructures in Judea and Samaria [the West Bank], … [and the third task is to] act against Hamas in the Gaza Strip. He added, “If need be, we will expand the campaign.”

Following a number of airstrikes by the Israelis, rockets were fired from Gaza into adjacent Israeli areas. Islamic Jihad spokesman Daoud Shihab told Al-Monitor, “So far, the Islamic Jihad has not responded. We make appropriate assessments of the circumstances in the field, and we operate according to these assessments and tactics dictated by the conditions of the resistance.” He further said, “We do not necessarily have to discuss all of our possibilities now. When the right moment comes, everyone will see the same old Islamic Jihad responding at the appropriate time and place.”

In regard to the missiles launched at Israel, Shihab stated, “The Palestinians are not concerned with escalation, and the launch of rockets was done without coordination between the factions. But [these rockets] are a natural response to the violations committed by Israel, which did not observe the truce.” Shihab says that Israel is playing with fire, which will backfire and eventually explode in Netanyahu's and his government's face because of the pressure being exerted on the Palestinian people from all sides.

Hamas' approach for now appears to be similar to Islamic Jihad's in terms of possible escalation. Hamas spokesman Sami Abu Zuhri said that Hamas is not interested in a confrontation at this stage, but added, “If such a confrontation is imposed, the world will discover the fragility of our enemy.” Abu Zuhri warned against Israel continuing to escalate the situation and suggested that it not test Hamas' patience for too long. “We believe the threats to kill Hamas leaders are hollow threats, and they do not scare our leaders or the Palestinian people. We stress the readiness of the resistance at all times,” he said.

When asked by Al-Monitor why Hamas is not concerned about a confrontation, Abu Zuhri replied, “This is a matter that the movement must decide. We did not initiate this. The occupation is attacking the Strip, and we are in a state of self-defense against the strikes launched by this brutal enemy.”

A security source in Gaza told Al-Monitor that so far, there are no warnings about or field preparations for a new war on Gaza. The source added that Hamas’ political leaders refraining from public appearances and moving from their usual locations is a precautionary measure. Abu Zuhri, however, asserted, “I am still working and in my office, and this applies to the rest of the leaders of Hamas. None of us has disappeared.”

Another source from Hamas told Al-Monitor, “[We are] not interested in waging war, but for now will exercise the maximum degree of self-restraint. Hamas believes Israel is launching raids just to please the angry Israeli street after the killing of the three settlers.” The source continued, “If Israel launched an aggression on the Gaza Strip, it will be amazed at Hamas’ capabilities. The movement has gained more experience since the two previous wars, as it has greatly developed its weapons, which include weapons more sophisticated than M-75 rockets. Hamas never stopped bringing weapons [into Gaza] last year, even with the closure of the tunnels, which were considered a main source of military supplies.”

“Even if Hamas suffered from a financial crisis, this was not and will never be the case of its military wing, which has not witnessed any financial crises and did not stop the payment of salaries to its military members,” he said.

Political analyst Talal Okal believes war is imminent: “There will be a war, like the previous wars. And its objective is not to remove Hamas, but to establish [new] balances.” Okal said the factions in Gaza were not yet involved in the war and believed they will endure the current bombings. Israel, however, will keep escalating to embarrass the armed factions and force them to respond. He said, for example, that the assassination of a Hamas or Islamic Jihad leader would trigger a response.

Okal also emphasized that in previous wars, it had been easy for Hamas to conclude Arab and international alliances, but today the movement is excluded from regional and international calculations, and therefore its position in the event of a war would be different. “The new war will increase Hamas attachment to the [Palestinian] reconciliation, which President Mahmoud Abbas will not renounce, especially since Hamas, after any future war, would have played a heroic role, and the president would be faced with Hamas having a new source of power. But such power does not mean that Hamas would rule the Gaza Strip again,” said Okal.

Yasser Abu Hein, editor-in-chief of Safa News Agency, disagreed with Okal. “There will be no war because Israel knows that Gaza can hurt it. Israel will not open a front with Hamas, but wants to keep the situation as it is: no war, no peace,” he told Al-Monitor. “The government of Israel has not been able to agree on a decision regarding the Hebron operation, let alone a major operation in Gaza. In any case, the resistance will face Israel's violations with limited responses.”

Abu Hein also noted the reluctance of Gazans to get into a new war. He stated, “The situation experienced by the Strip is frustrating, and the people are under great pressure, which will prevent Hamas from heading toward a new war.”