In an interview with Al-Monitor, Druze Knesset member Hamad Amar expresses his concern: ''I'm worried that radicalization among the Sunnis in the Middle East will penetrate the Israeli Arab community.'' 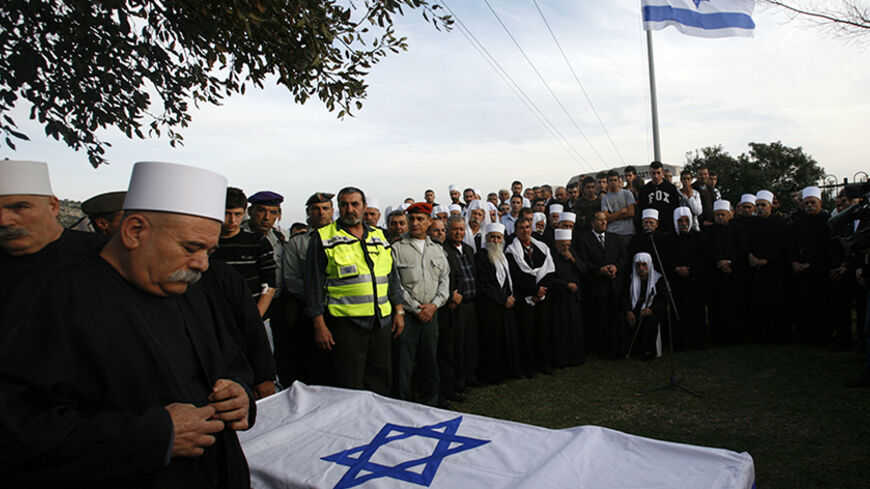 Elders of the Druze village of Maghar mourn near the coffin of Israeli soldier Ihab Chattib, who was killed by a Palestinian police officer, Feb. 11, 2010. - REUTERS/Gil Cohen Magen

On June 30, just hours before the official announcement that the bodies of the three abducted teens had been found, Prime Minister Benjamin Netanyahu had a few words to say at the start of the Likud-Beitenu Knesset faction’s weekly meeting. He devoted his comments to his disappointment with the leadership of the Israeli Arab public for failing to condemn the abduction, saying, “They weren’t even willing to say what [Palestinian President] Mahmoud Abbas said.” He then recalled the violent demonstration in the Arab town of Umm al-Fahm, which took place just a few days earlier to protest Israel Defense Forces (IDF) activities in the West Bank while searching for the teens. Arab Knesset members attended the event, where calls went out to abduct Israeli soldiers.

It was not by chance that Netanyahu focused on the Arab leadership’s indifferent attitude toward the abduction. Assessments of the situation, coupled with intelligence reports, indicate that groups within the Arab sector in Israel are undergoing radicalization, and that this could lead to a significant outbreak of violence. Netanyahu asked that responsibility for this be placed squarely on the official Arab leadership. He also announced that he was examining the possibility of outlawing the northern branch of the Islamic Movement.

Hamad Amar, the Druze Knesset member from the Yisrael Beitenu party, is intimately familiar with Israeli Arab society and its leadership. He is convinced that the approach taken by Netanyahu and the chairman of his own party, Foreign Minister Avigdor Liberman, toward “the northern branch of the Islamic Movement” is both on point and necessary, given the current circumstances, and has nothing to do with their positions as heads of right-wing parties.

“The Arab leadership is mistaken, and it is causing harm to its constituents by failing to condemn the abductions. It is a weak leadership, which is being dragged along by the mood in the street,” Amar said in an interview with Al-Monitor.

Al-Monitor:  Do you mean the Arab Knesset members, too?

Amar:  Of course. The murderers are despicable criminals, who should be brought to justice as quickly as possible. There is no doubt whatsoever that this was a terrorist act. That is why the way the Arab leadership has been behaving is not only wrong but also damaging to the Israeli Arab sector. After all, Israeli Arabs are unwilling to replace the State of Israel with anything else. Look at what is happening in the other countries across the Middle East. So if this leadership is really interested in the well-being of the Arab public, it should make a strategic decision to side with Israel. But the leadership is weak, and it is being steered along a different path. 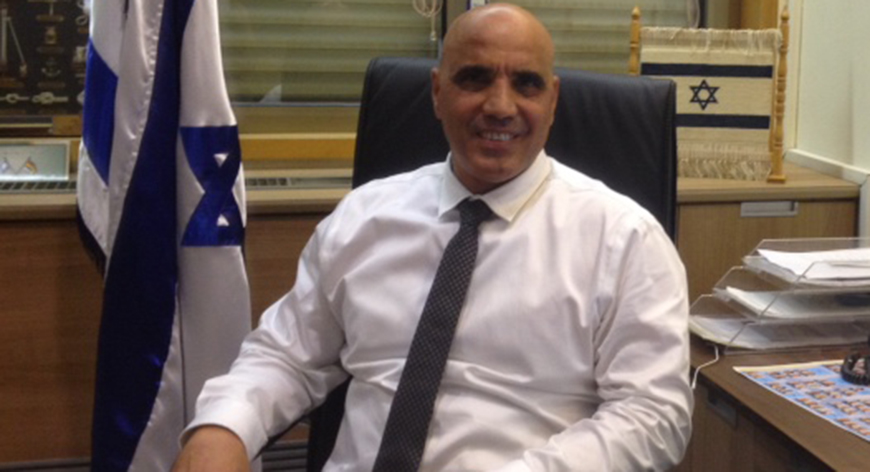 Al-Monitor:  How do you explain the indifference shown by the Arab leadership to the abduction?

Amar:  It is a weak leadership. They did not condemn the abduction because they are afraid that groups within the sector who support the abduction and terrorism will come out against them. They don’t understand the most obvious fact, that these abductions and murders were terrorist acts, which did not serve their interests. It is terrorism to kidnap and murder a boy coming home from school. If the Arab leadership was strong, it would stand up and say, “That crossed a red line. As leaders of the Arab sector, we condemn Hamas and the killing.” But as much as it pains me to say it, they are weak.

Al-Monitor:  Do the Arab Knesset members support this?

Amar:  If you mean [Knesset member] Haneen Zoabi, I want to say that her comments aren’t even worth mentioning. We attach far too much prominence to her, which is exactly what she wants. She has to be put back into the right perspective.

The Arab Knesset members are an important part of the national political leadership of the Israeli Arab sector. It disappoints me that some of them are fanning the flames. That includes Zoabi, of course, but it is not just her. I heard Knesset member Afou Agbaria [of Hadash] say on the Knesset Channel that Hamas is not a terrorist organization. I really can’t understand him. If Hamas isn’t a terrorist organization, then what is it? A humanitarian organization? What kind of organization is it that supports eliminating the State of Israel, throwing all the Jews out of their land and creating an Islamic state to replace it?

Arab Knesset members serving in the legislature of the State of Israel should be a bridge between the Arab public and the state, but they are not fulfilling that function. If anything, what they are doing is the opposite. They benefit from freedom of expression and the other advantages of a democracy, but ultimately hurt themselves and their constituents.

Al-Monitor:  As a Druze who grew up and still lives alongside Muslims and Christians in the village of Shfaram, don’t you empathize with the struggles for equal rights by the Arab public at large and more particularly, by their representatives in the Knesset? Maybe this is the only way they have to voice a protest against the state.

Amar:  Unlike those Knesset members, I represent a community that is part of the State of Israel. We serve in combat units in the IDF. I am not conflicted about that. This is my country. The Druze community of Israel decided to throw its lot in with the fate of the Jewish minority even before the state was created. We are still together almost 70 years later. Given what is happening in the Middle East, now is the time for Israeli Arabs to make the right decision. They must decide that they are part of the State of Israel and live together with the Jewish people.

I empathize with them and think that they should receive their civil rights. Nevertheless, there is a vast difference between wanting them to receive those rights and seeing myself as part of them or identifying with them, certainly given the fact that they are unwilling to condemn a terrorist crime.

The Druze sector is more loyal to the state than any other group of citizens. It wants to be a part of the State of Israel. Yes, it has suffered from discrimination in terms of budget and attitude. It continues to suffer from that. Still, that must in no way be linked to the intolerable behavior of the Arab leadership. The various Israeli governments have failed when it comes to the Arab sector, but that does not mean that the Arab leadership should encourage more abductions.

Al-Monitor:  Is Arab society becoming more extreme in its attitudes toward the state?

Amar:  Israeli Arabs who demonstrate while waving Hamas flags and calling for more abductions are crossing a red line. What they are doing should not pass without a reaction. At the same time, however, I also claim that this radicalization exists among a leadership that is influenced by a small group of extremists, and not among the average citizens. The leadership is being dragged along by this group because it is weak, and in turn, it impacts the entire community. As I see it, these demonstrations will continue. There are provocateurs among the Arab sector, and a leadership that is becoming increasingly extreme only contributes to that.

The state should take account of what happened, and people should be punished for it. Israel should take action against the problematic individuals, which means anyone who supports or is in contact with terrorist organizations. It is absolutely intolerable that they enjoy all the benefits that the country has to offer, including the right to assemble and organize to take action against the state. As a state, we have to put a stop to that as quickly as possible.

Al-Monitor:  Aren’t you granting too much significance to the Arab leadership, when you claim that it is spawning intense courses of action that result in extremism?

Amar:  I will say something that is very harsh. The leadership in the Arab street used to be a lot smarter. It knew the right way to navigate its ship so that they would become part of the State of Israel, and to combine their concern for the Arab sector’s interests with democracy. The current leadership plays politics 24 hours a day. All it cares about is how to survive and get stronger within its own sector. It is not leading its constituents along the right path. They think that they will get elected by being provocative.

I am worried that radicalization among the Sunnis in the Middle East will penetrate the Israeli Arab community. That really disturbs me. At the same time, I think that it is the role of the Arab leadership to prevent it.

Al-Monitor:  Isn’t the chairman of your party, who is sometimes accused of racism, heating things up when he attacks the Arabs?

Amar:  I’ve worked with Yvette [Liberman] for many years now and served as his adviser. I’ve been with him since the day he founded the Yisrael Beitenu party. I decided to throw my lot in with him after I saw what he did for the Druze, when he was director general of the prime minister’s office. Based on my firsthand experience, I can tell you that no minister on the left did what Yvette did on behalf of the non-Jewish sector; so it is impossible to call him a racist. He speaks out against Arab Knesset members and not against the Arab public. There is a difference. He attacks them for using their parliamentary immunity to harm the State of Israel. He isn’t speaking out against some Arab Knesset member or other because he is an Arab. He is speaking against the actions being done. I wouldn’t be with him if he was a racist.