The current Israel-Hamas conflict has generated an aggressive political patriotic discourse in Israel that has taken a heavy toll on Israeli democracy, in which those who dare to oppose the operation are expected to keep silent. 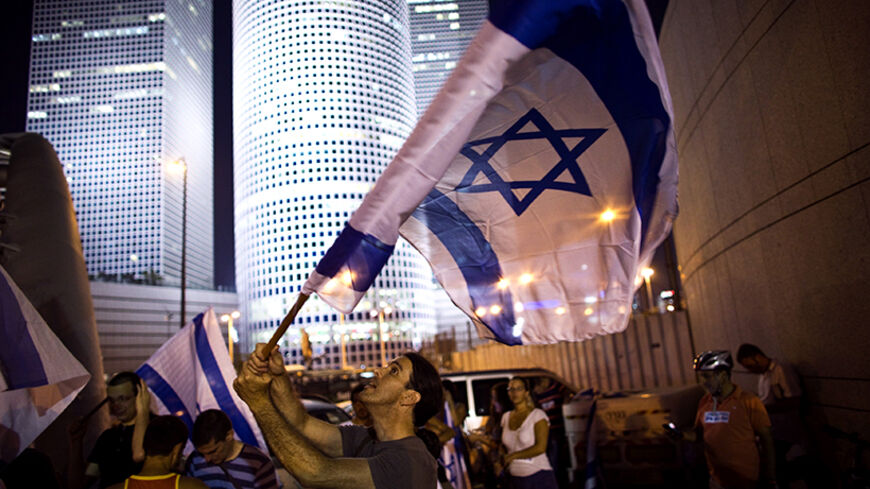 A right-wing activist in Tel Aviv waves a flag during a protest in support of Israel's offensive in the Gaza Strip, July 29, 2014. - REUTERS/Ronen Zvulun

The way things look today, Aug. 3, the military investment in the Gaza war failed to result in any diplomatic dividends to either of the two sides. Israel did not achieve its long-term objective, as expressed by the prime minister, i.e., the demilitarization of Gaza from fighting means, and Hamas failed to force Israel into lifting its lengthy siege of the Gaza Strip. The Palestinian Authority (PA), based in Ramallah, was left out of the political game altogether, just as it was during the unilateral disengagement from Gaza in 2005 and Israel’s previous assaults. Even in the best-case scenario, the only partner with whom Israel might have reached a long-term arrangement in the occupied territories has been found irrelevant. In the worst-case scenario, Palestinian President Mahmoud Abbas has been portrayed to his constituents as a collaborator with Israel. Negotiations over a two-state solution now seem even more remote than they did on the eve of Operation Protective Edge.

At the same time, the hail of rockets aimed at the civilian population and the apocalyptic scenarios about the tunnels, have pushed peaceful dialogue and coexistence to the remote margins of Israeli society. According to a Channel 10 survey published on July 28, the vast majority of Israeli Jews (87%) supported a continuation of the fighting. Hamas can therefore take credit for a worrisome shutting of the hearts and minds of Israel’s Jews. Over the past few weeks, expressions of identification with the suffering of civilians in Gaza and voices protesting the killing of women and children have been met with vitriol and even with violence. It is true that Hamas is a brutal fascist group, for whom the lives of children — including Palestinian children — are a legitimate tool to fulfill its political and ideological agenda. Yes, the criminals of Hamas have turned schools, hospitals, homes and mosques into weapons depots and used them to conceal the entrances to assault tunnels. Hamas thugs forced helpless civilians to serve as human shields. Nevertheless, do these monstrous ethical standards justify the killing of more than 700 of the organization’s Palestinian hostages?

After the massacre in Sabra and Shatila in Lebanon in September 1982, over 200,000 Israelis gathered in Malchei Yisrael Square in Tel Aviv to demand the creation of an official commission of inquiry. Late Ariel Sharon, who was then the defense minister, was forced to resign after the commission found that he failed to prevent the murder of over 700 Palestinians by Christian Phalangists. Today, Sabra and Shatila have been replaced by the Gaza neighborhoods of Rafah and Shajaiya. This time, however, Israel Defense Forces (IDF) soldiers are not silent witnesses to the deeds. They are actually implementing it upon the orders of their government and with overwhelming public support. Although Palestinian civilians are now being killed by Israeli fire, the number of participants at a more recent demonstration in Malchei Yisrael Square (since renamed the “Rabin Square”) was fewer than 10,000. Dov Khenin is the only Jewish member of the Knesset who dares to appear at anti-war demonstrations. As the largest opposition party, the Labor Party has thrown its full support behind the military operation, with some of its members even outflanking Prime Minister Benjamin Netanyahu from the right.

Palestinian citizens of Israel who protested the war have been arrested en masse. According to one investigation conducted by Knesset member Ahmed Tibi, their number has already reached 680, and that does not include hundreds of additional demonstrators from East Jerusalem. Talking to Al-Monitor, Tibi said that these mass arrests were intended to deter the Arab public from making itself heard. At the same time, the patriotism of the Israeli news site Walla, with its slogan ''Israeli, first of all,'' did not benefit their reporter, who was arrested while covering the left-wing demonstration in Rabin Square. The police are also unable to ensure the safety of Arab citizens facing violence at the hands of racist gangs. That leaves Arab citizens in mixed cities like Jerusalem and Jaffa to sometimes lock themselves in their homes fearing for their safety. Left-wing activists in Jerusalem told Al-Monitor that some Arab students who registered for the coming academic year at the Hebrew University in Jerusalem have withdrawn their applications.

On another occasion, a senior Bar Ilan University lecturer was requested to apologize on July 28 over an email he sent to his students, in which he referred to victims on both sides of the Gaza war. Professor Hanoch Sheinman wrote that he hoped his message ''finds you in a safe place, and that you, your families and those dear to you are not among the hundreds of people that were killed, the thousands wounded, or the tens of thousands whose homes were destroyed or were forced to leave their homes during, or as a direct result of, the violent confrontation in the Gaza Strip and its environs.” Some of the students complained to the faculty dean, Shahar Lifshitz, that the letter hurt their feelings. Following the complaint, the dean issued a statement, saying that he was ''shocked'' by Sheinman's letter, and that he apologizes for it ''in his name and the name of the faculty.'' He promised that the matter will be handled with ''the appropriate seriousness.” He stated that the letter stands in contrast with the university's values, and that it ''constitutes the inappropriate use of the power given to a lecturer to exploit his platform as a law teacher to convey messages reflecting his positions, in a way that, as noted, seriously offended the students and their families.

Politicians and journalists once considered to identify with the “center” of the political spectrum have all adopted the same patriotic, militaristic jingoism. They compete with one another over who can issue the most forthcoming compliments to the public for its “resilience” and “tenacity.” Indeed, along the streets and highways of Israel are posters in support of the IDF, largely accompanied by Israeli flags. And yet, despite all that, the rocket attacks have taken a toll on Israeli democracy. Freedom of expression lies at the heart of any democratic society, but in Israel it has become a matter of controversy. Demonstrators are exposed to violence by radical right-wing phalanges. In at least one case, these thugs actually followed a female demonstrator back from a protest rally and beat her up at the entrance to her home. Meanwhile, social networks are crammed with crude, racist responses and threats.

One extreme example of the malady that has overwhelmed Israeli democracy is the unprecedented decision by the Knesset’s ethics committee to suspend an Arab elected official, Knesset member Haneen Zoabi, from the legislature for half a year. Zoabi is being punished for saying that the murderers of the three teens abducted near Hebron were not terrorists and for speaking out on behalf of a popular resistance against the Israeli occupation.

Many senior journalists have participated in this call to limit freedom of expression. Erel Segal wrote for Al-Monitor: “Now, however, with Israel at war, when the best of our children are putting their lives on the line in the battle against an Islamo-fascist organization, which is hiding behind women and children, it is time to put limits on freedom of expression.” He goes on to argue that Zoabi’s opinion, as she expressed it in an interview with Al Jazeera on July 19, crossed the boundaries of acceptable discourse in a democracy forced to defend itself. In that interview, she said that the Israeli home front could not withstand a drawn-out conflict and complimented Hamas for its tenacity.

For Matti Golan, the author of a prominent column for the Israeli daily financial paper Globes and the former managing editor of Israeli daily Haaretz, simply suspending Zoabi from the Knesset does not go far enough. Instead, he suggests on July 20 that she be arrested immediately, without a trial, and that she be held until the end of the war. Only then, writes Golan, should the authorities decide whether she should stand trial at all. And Golan recommends the same treatment for Haaretz journalist Gideon Levy, who refuses to adopt the line of, “Quiet! We’re shooting here,” and even dared to publish an article critical of the Israeli air force’s pilots, under the headline “The Worst Become Pilots” (playing on an old slogan, “The best become pilots”). He was attacked by passersby and his life was threatened before the management of Haaretz decided to provide him with a body guard. This is democracy defending itself. The photo of Levy with his security guard could even be the victory photo of this war, if the victor is violence and fascism.