The flow of information through social networks challenges one of the most difficult tasks of Israeli society: the ritual of informing the families of fallen soldiers that a loved one has died in battle. 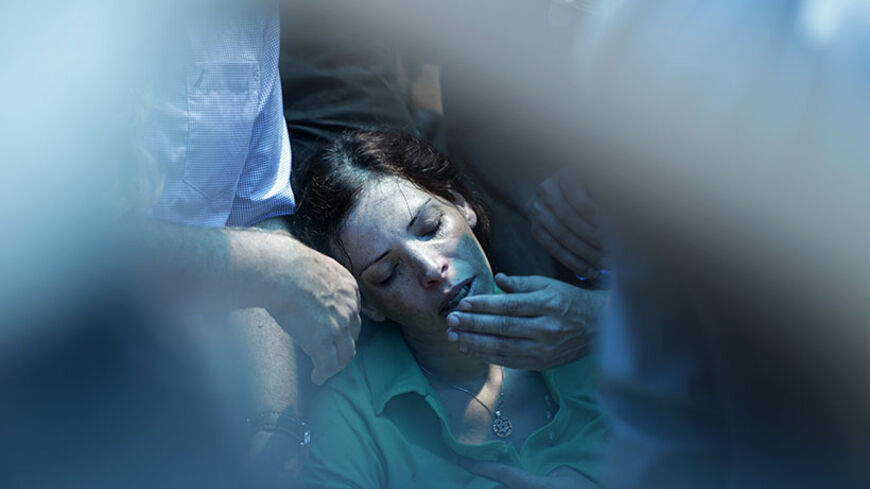 Dana, the sister of Israeli soldier Tsafrir Bar-Or, mourns during his funeral in Holon near Tel Aviv, July 21, 2014. - REUTERS/Daniel Bar-On

For days now, Israelis have been following the fighting in the Gaza Strip. The sense of anxiety across the country has been increasing day by day. Despite the experience they’ve amassed during all the wars and battles since the founding of the state, Israelis still have a hard time coming to terms with the steep human cost that they are forced to pay. First and foremost, every soldier killed at war is a tragic loss to his family. Almost at the same time, however, the casualties quickly become part of the national mythos of the fallen soldier.

The war in Gaza is turning out to be especially brutal. Nowhere near this many soldiers have fallen in such a short time — 25 casualties in just four days — since the Second Lebanon War in the summer of 2006. The number of victims is sending new tremors through Israeli society, which has difficulty dealing with the loss. While this society may be considered strong in terms of its military might, it is also extremely fragile when it comes to dealing with its fallen soldiers.

The Casualties Unit of the Israel Defense Forces (IDF) operates like a well-oiled machine. Perhaps it can be attributed to the very high number of casualties since the founding of the state (over 23,000), but regardless of the reason, the unit’s officers are meticulous about every detail of the notification and the way it is delivered. In all cases, or at least in most of them, officers from the fallen soldier’s unit inform the chief officer of the city, who is responsible for the town where the fallen soldier's parents live.

One thing that is especially fascinating is the military procedure from the moment the army learns that a soldier has been killed. There is no other country in the world that reacts toward its dead like Israeli society. It is a complex and painful process that involves keeping the name of the fallen soldier secret until the official announcement is given to the parents.

The chief officer of the city, who in normal times serves as the link between the army and the soldiers, assembles a team consisting of a casualties officer, a physician, one or two paramedics and two reservists to assist him when the notification is delivered. Before approaching the parents of the fallen soldier, the unit attempts to locate brothers, sisters and any other first-degree relatives. They inform them of the tragedy and ask these relatives to accompany them to the home of the soldier’s parents.

Once they are ready to deliver the notification, the most terrible moment of all arrives. The military group that accompanies the family members goes to the family’s home and waits for “the appropriate moment.” They avoid using the intercom, so as not to attract attention. Instead they look for other ways to enter the building, usually with the help of neighbors. Then they arrive at the door of the family’s apartment. The chief officer of the city, a relative or an officer from the fallen soldier’s unit knocks. The door opens. The horrific spectacle begins. In most cases, there’s no reason to say much. The very presence of the uniformed group is enough for the family to realize that disaster has struck. Each family reacts in its own way. Some parents withdraw and suffer in silence in a corner of the home. In many other cases, heartrending shrieks echo across the neighborhood. Within an instant, the neighbors have all found out the terrible news and start rushing to the house where tragedy struck.

In most cases, these notifications catch the families completely by surprise. The army insists on taking every precaution to block rumors from reaching the parents. Newspaper editorial boards receive notification in real time from IDF representatives that a soldier has been killed, but as part of their understandings with the army, they will only make an announcement after the soldier’s parents have been informed. The news media follow a single formula and avoid revealing the identity of the fallen soldier. Instead, they report, “The family has been notified.”

But accidents happen. Rona Ramon, the widow of Israeli astronaut Ilan Ramon, was making her way home one day in 2009, when she saw journalists and photographers waiting by the entrance. She immediately realized that something had happened to her son Assaf, who was a combat pilot in the air force. His jet had crashed during a training flight a few hours earlier. Journalists rushed to her home, believing that she had already been told the bitter news. The air force officers who came to inform her of the tragedy discovered that they were too late.

The war in Gaza has caught Israel in an extreme state of anxiety. The involvement of more than 70,000 regular soldiers and reservists in the conflict creates a situation in which almost every family in Israel has at least one relative on the battlefield. Given the nature of the fighting, which is taking place in one of the most densely populated cities in the world, the families of these soldiers can’t help but feel deep distress, knowing that their loved ones are taking part in a campaign that is more like a game of Russian roulette. With this as the new background against which the war is waged, news of each casualty does not wait for the proper procedures to be followed. It takes off and spreads across the country before the victim’s family finds out. While soldiers’ cell phones are taken from them before they enter the Gaza Strip, this has not stopped information about casualties from leaking, even from the battlefield. It is the nature of Israel that nothing remains a secret the moment a casualty is brought to the nearest hospital, photographers and journalists gather around the gurney, then share information with their friends about the number of casualties and their identities.

Social networks have also interfered with the long-established procedures for informing families, with the current conflict perhaps the most obvious example of this. Since Internet users have no formal obligations to the army, they post whatever they want. Ever since the beginning of this campaign, precise details and also misleading details about the battles and casualties have appeared online, without first consulting with the authorities. For instance, a message on WhatsApp detailed a list of casualties, which included the name of a soldier from the village of Nitzan. Only several hours later, his parents learned that he was not wounded at all. In these critical days, when every bit of information is a desired commodity, the social networks have become a key player on the battlefield.

It must be noted that the army is well aware of the great damage caused by this phenomenon. Four youngsters were arrested after publishing names of fallen before the notice was delivered to the families. The state announced that they would be indicted with serious charges, to deter others from such activities that entail great pain, especially these days, when thousands of families live in constant fear for their sons fighting in Gaza.