The hospital in Fallujah has been targeted on numerous occasions during the fighting there, says a local doctor as Human Rights Watch releases a report on the matter. 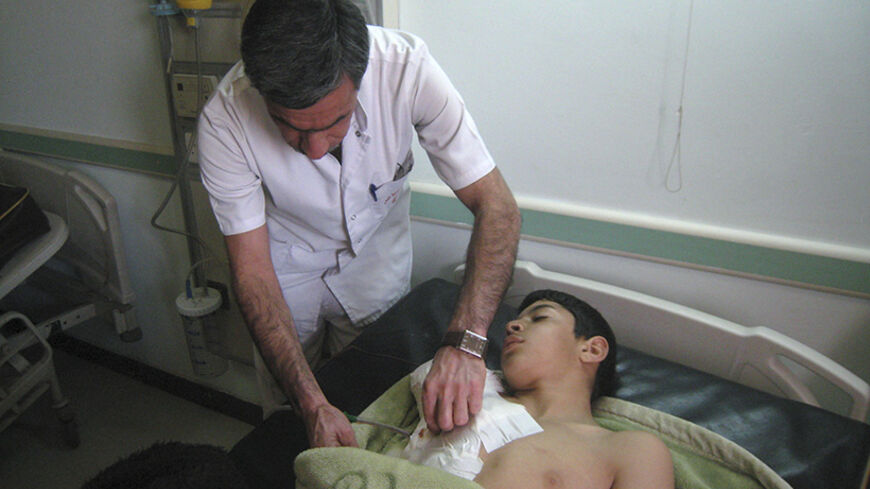 In a phone call with Al-Monitor July 17, Shami confirmed that the hospital has been “targeted with barrel bombs dropped by the Iraqi air force.”

“One of the barrel bombs was dropped on the Faculty of Medicine and another fell behind the hospital.” While no one was killed, he said, the bombing “resulted in serious material damage,” Shami said.

Members of the Iraqi parliament accused the Iraqi army of using barrel bombs in its operation against gunmen affiliated with the Islamic State (IS) and armed tribal groups since January in Anbar province, west of Baghdad. The government denied the accusations.

“Since the beginning of the crisis, the hospital has been targeted more than 22 times with mortars, rockets and heavy artillery, as well as by aircraft, killing a number of the medical staff and patients and injuring patients at the hospital,” Shami said.

Sٍٍٍhami said the army is using excessive force, adding, “Dozens of times, we have called on all government parties and security leaders to exclude the hospital from the military operations in the province. Yet, the armed forces, security leaders and the government do not listen to our repeated call.”

Last May, Human Rights Watch reported, “The Iraqi security forces have repeatedly struck the hospital in Fallujah.” However, it quoted security sources as saying, “Gunmen are being treated at the hospital and armed groups are detaining local officials in the hospitals’ administrative rooms.”

Shami denied the contents of the Human Rights Watch report, saying, “The hospital receives civilians injured by the army’s shelling on the city. They are being treated there and the vast majority of them are women and children.”

For more than seven months now, the city of Fallujah in Anbar has been ravaged by a war between the Iraqi army and gunmen affiliated with IS and tribal groups for control of the city. Iraqi security forces have been struggling to secure the city, but have failed to do so.

In a phone interview with Al-Monitor, Sheikh Mohammed al-Bajjari, a member of the interim local council in Fallujah, said, “The hospital was struck more than 20 times by the army," and that the military leadership is “taking an unethical approach.”

He said, “We have appealed several times to all government agencies, both in Anbar’s local government and the central government, as well as military leaders, to exclude hospitals from their military operations, but they have turned deaf ears to what is happening.” Bajjari noted, “The local council in Fallujah has video documentation and official documents of the army shelling the hospital, and we have handed them over to several Arab and international organizations.”

A security source in Anbar speaking on condition of anonymity countered, “The armed groups are targeting civilians and the hospital to give the people the false impression that the army is targeting them.” He did not deny that “a number of mortar bombs fell on the hospital,” telling Al-Monitor, “Mistakes can happen during the war.”