The Egyptian government says it has not received official requests to import gas from Israeli companies, but has received expressions of intent from various foreign companies operating in the country. 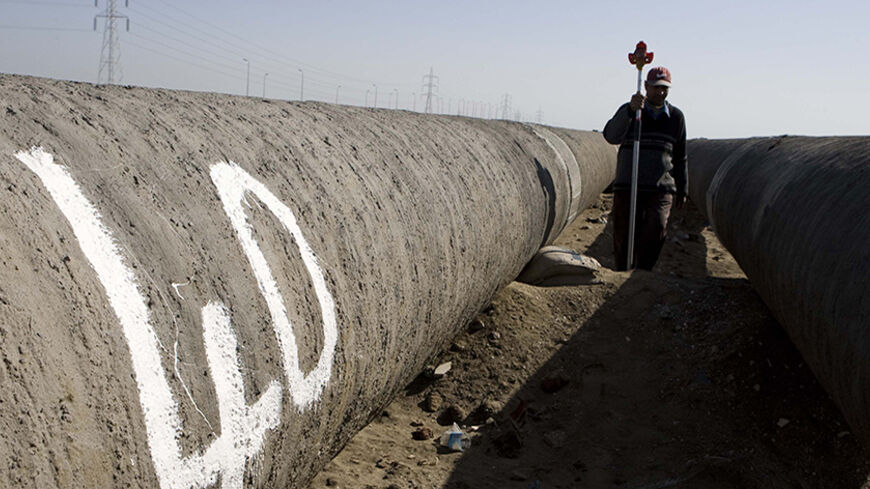 CAIRO — In light of the energy crisis in Egypt and the inefficiency of power plants due to a lack of natural gas since local production in Egypt decreased, the government and private companies in the sector have resorted to importing liquefied natural gas (LNG) to satisfy local demand.

Egypt was, until recently, a country that exported natural gas. Egyptian contracts limit importing natural gas from Arab countries, as mentioned in the agenda of President Abdel Fattah al-Sisi’s visit to Algeria. The British BG Group’s operation in Egypt started negotiating with Israel to supply Egypt with 7 billion cubic meters (247 billion cubic feet) of LNG annually for a period of 15 years.

An Egyptian government source who works in the petroleum industry told Al-Monitor, “There is a huge crisis in the natural gas sector in Egypt, and we cannot stop foreign companies operating in Egypt from importing gas from Israel.”

The source said, “The Egyptian government, represented by EGAS, has also started negotiating with foreign and Arab countries to import natural gas on a monthly basis, to satisfy internal needs. The Egyptian Ministry of Finance dedicated a special fund for this matter in the country's new budget.”

The source confirmed, “Importing natural gas from Israel through public companies is a sovereign and political decision, it is also premature and we should not put the government in a delicate situation yet.”

The Egyptian Minister of Petroleum and Mineral Resources, Sharif Ismail, told Al-Monitor, “Importing natural gas from Israel, or from companies that are exploring the Israeli regional waters, has to be preceded by getting the approval of the Egyptian government, achieving an economic value for Egypt and resolving the issues of the international arbitration.”

Ismail continued, “The British and Spanish companies that want to import gas from Israel were only expressing their intentions, but no official procedures were taken to start bringing the gas to Egypt.”

The minister explained the reason behind Egypt resorting to importing natural gas: “This is due to the instability in research and exploration over the past three years and not pumping new investment into developing the fields and increasing productivity, in addition to the accumulation of the government’s debt to foreign companies that reached $5.9 billion.”

However, Ismail said, “Egypt has an important natural gas reserve and major opportunities for research and exploration in the Mediterranean, the Delta and the Western Sahara, in addition to new exploration that is expected to start producing by the end of this year.”

Retired ambassador Ibrahim Youssri, president of the Popular Campaign to Stop Gas Exports to Israel, said he could not see Egypt importing natural gas from Israeli companies since Egypt used to export gas to Israel at a low rate under former President Hosni Mubarak.

“I cannot imagine Egypt going back to importing natural gas from Israel after it used to be one of the biggest exporting countries. If this ever happens, it would be an act against the law,” Youssri told Al-Monitor. “The corruption in the petroleum industry in Egypt is the cause of this crisis. The foreign companies operating in the field of exploring natural gas are conspiring with Israel. The Egyptian government must set strict conditions for these companies to work in Egypt.”

Former head of EGAS Muhammad Shoaib said in an interview with Al-Monitor that Egypt's importing gas from abroad should not be considered shameful, without directly referring to Israel. “Egypt is now in great need of importing natural gas, since it is the cheapest and most essential element in producing energy and electricity. It is not shameful that Egyptian production is not enough for internal needs,” Shoaib said.

He added, “The trade contracts are the ones that control the transactions of imports and are usually made between companies, not countries or governments. These contracts are subject to the international market and the laws of supply and demand.”

The government’s attempts to overcome the crisis of natural gas research in oil fields on land and in Egypt’s territorial waters depend on the financing capacities to cover the major debt of the petroleum industry. The Egyptian government must attract more investment, as the national budget of the country is facing a deficit that has led the government to gradually reduce the subsidies for petroleum products. This is what has largely opened the doors to potentially importing natural gas from Israel to satisfy growing local needs.