Group with alleged links to Islamic State gathers in Istanbul

The release of a video recording, allegedly of a group affiliated with the Islamic State assembling in Istanbul, has created heated controversy. 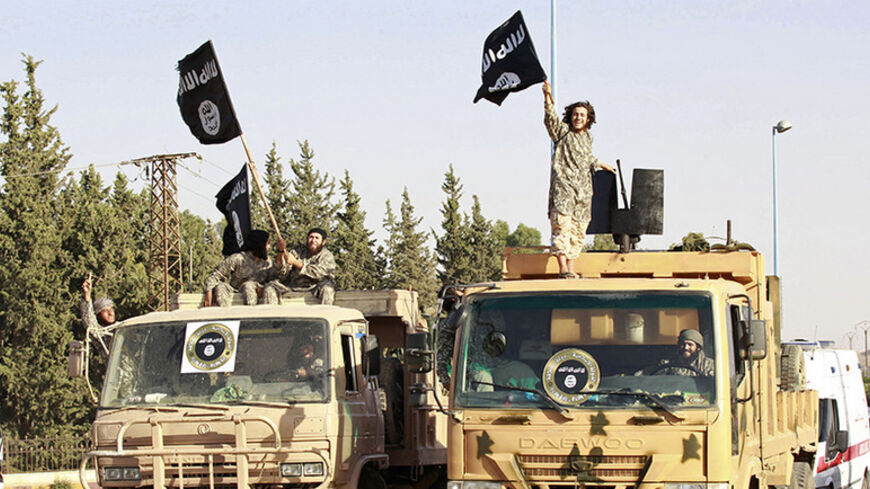 Militant Islamist fighters wave flags as they take part in a military parade along the streets of Syria's northern Raqqa province, June 30, 2014. - REUTERS

There has been much speculation over the past three years about Turkey’s supporting radical Islamist groups in an attempt to end Syrian President Bashar al-Assad’s regime. Turkish Prime Minister Recep Tayyip Erdogan’s government, however, has categorically denied these allegations.

Yet the release of a video, allegedly showing a “jihadist” crowd gathering in Istanbul on July 28 for the prayers marking the end of the holy month of Ramadan, has sparked controversy. The recording was released by takvahaber.net, described by Turkish media as an online portal close to the Islamic State (IS).

This website was the only source that reported the assembling of this crowd in Omerli, on the Anatolian side of Istanbul. The 26-minute recording includes a long preaching segment. “Let God make us fight the just war of jihad,” the preacher says. “May God help jihadists and those who are patient for victory. May God help their shots hit the mark.”

Although the Turkish parliament was in summer recess, Sezgin Tanrikulu, a main opposition Republican People’s Party (CHP) deputy, submitted a written query through the speaker's office, asking that it be answered by Interior Minister Efkan Ala. Asking the security establishment to confirm first whether this gathering took place in Istanbul and whether this was really a crowd affiliated with IS, Tanrikulu asked whether there were any IS camps within Turkey’s borders.

“Are the allegations true that the IS militants also use this open field for militant training?” Tanrikulu asked. “Have these people asked for any official permission to gather this crowd to mark the end of Ramadan? If so, who gave them this permission? What were the Istanbul security director and the head of gendarmerie in the Istanbul area doing when these people were calling for jihad there?”

He added, “Is it true that both the police department and the gendarmerie units were ordered not to interfere when the group, the extension of a terrorist organization, was calling for jihad in Istanbul? Who gave these orders?”

No Turkish government official has yet said a word about the affair. Speaking to Al-Monitor, Turkish authorities said they were so far dependent on this website’s allegation that this event took place in Istanbul. “Although we cannot provide you any official confirmation that this event took place in Istanbul, it seems quite likely that it was recorded where they claim it was,” one official who asked to remain anonymous told Al-Monitor.

These authorities also note various challenges they face. Although Turkey designates al-Qaeda as a terrorist organization, there is a big question mark whether IS militants are also categorized as “terrorists.” Once the state depicts a group as a terror organization, it activates all its tools to fight against its members. “It is not really clear whether there is any such order here,” this official told Al-Monitor. “What makes everything more complicated is that IS kidnapped Turkey’s Mosul Consulate members, and there are rumors about a tough ransom negotiation to rescue them.” The rumor is that Turkey will pay about $300 million to get its diplomats back.

IS stormed the Turkish Consulate in Mosul on June 11, taking hostage all 49 members of its staff hostage, including Consul General Ozturk Yilmaz.

The same authorities Al-Monitor talked to suggested that IS has actually shown its muscle to the Erdogan government by releasing this video. “The government has already put a gag order on the media not to report anything that could offend the IS. And they release this video footage — all in Turkish, shot in Istanbul, and there is no word from the government yet. They have taken the government hostage as well with this video,” this official told Al-Monitor. “If they don’t act today for the sake of saving these 49 diplomats, it is not clear what they can do next. It is a very delicate and tough decision for the government, but one has to draw the line before it gets too late.”

Put simply, whether the Erdogan government helped the radical Islamic groups fight against the Assad regime could be irrelevant, as these groups already openly operate in Turkish territory. What is relevant today is that these groups are posing a threat to Turkey in terms of potentially recruiting and radicalizing its own population. If IS is not really considered a terrorist organization, the security establishment is quite restricted in how it may act against these militants. Therefore, only the government can determine when it is time to call them one. The media, however, remain restricted in talking about this group until the Turkish diplomats' fates become clear.