A British report could help the Barack Obama administration sell an Iranian nuclear accord — or extension of the interim agreement — to a skeptical Congress. 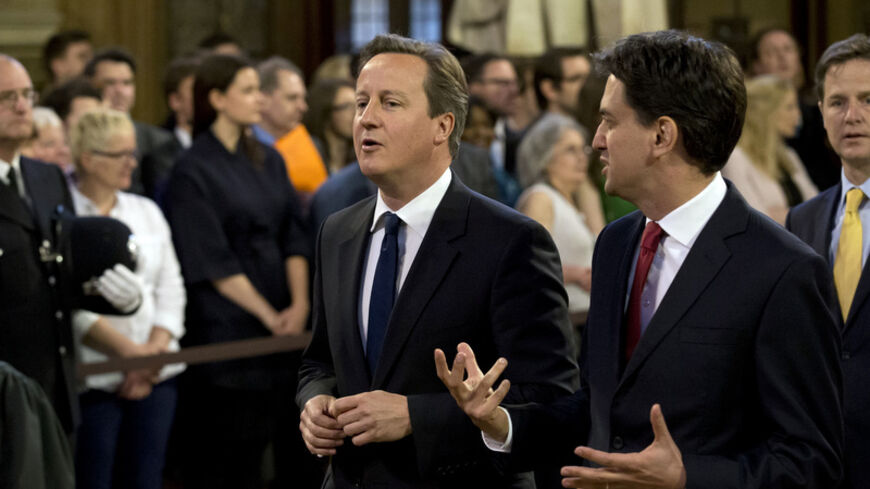 Britain's Prime Minister David Cameron (C) and Ed Miliband (2nd R), the leader of the opposition Labour Party, and Deputy Prime Minister Nick Clegg (R) arrive to listen to Queen Elizabeth deliver her speech in the House of Lords, during the State Opening of Parliament at the Palace of Westminster in London, June 4, 2014. - REUTERS/Matt Dunham

While President Barack Obama struggles to build congressional support for a potential nuclear agreement with Iran, the British House of Commons' Foreign Affairs Committee has endorsed a deal that would allow Iran to continue limited uranium enrichment.

In a lengthy report made available to Al-Monitor in advance and published early July 14, British time, the 11-member committee — composed of representatives from Britain’s three main political parties — also states that negotiations “are the most promising forum for reaching a settlement which assuages fears about the scope and intention of the Iranian nuclear program.”

While expressing concern about Iran’s regional role and its poor record on human rights, the report is far more nuanced and conciliatory than recent congressional letters to Obama and proposed legislation, which seek total dismantlement of the Iranian nuclear program as the price for lifting economic sanctions. Appearing just a week before the deadline for current negotiations to succeed in Vienna — or require a renewal of last year’s interim accord — the British paper could have a positive impact on the US debate.

“There is a widespread sense that the prospects for reaching a long-term settlement which would assuage fears about regional security are better than they have ever been,” the committee report states. “We endorse the UK’s decision to take part in negotiations with Iran on its nuclear program through the framework of the Joint Plan of Action. … We acknowledge that there is probably no prospect of a lasting deal which does not allow Iran to enrich uranium.”

The report goes on, however, to state that enrichment capacity should be limited so that Iran cannot break out and try to enrich enough uranium for a nuclear weapon without detection for six months — a time frame that also appears to be the minimum that the Obama administration would accept.

Given the importance of Britain and other European allies in imposing tough sanctions against Iran, the views of the British committee could help persuade some US skeptics that they will lose key multilateral support if they seek to impose harsh conditions for a long-term deal. Asked why the committee put out the report now, Mike Gapes, the ranking Labour Party member, told Al-Monitor in an email that the decision was partly tied to Britain’s decision to re-open its embassy in Tehran. He added, “Parliament goes into its summer recess next week so it was important to conclude our work before the recess and to publish before the expected conclusion of the talks.”

“I do not know whether agreement will be reached,” Gapes continued. “However, it is important that any agreement is serious and durable. If it is not possible to reach full agreement by July 20, then I would personally support an extension of the interim arrangements.”

Gapes, who represents a London constituency called Ilford South, said in response to another question that he doubted most American legislators “understand how much European effort and cooperation there has been [in getting to the current point in negotiations] or how much importance Europeans attach to getting this agreement.” He urged the US Congress to “look at the big picture” and not to pass new sanctions. While “the impact of previous and existing sanctions have made a significant contribution to changing Iranian attitudes … introduction of new US sanctions during these negotiations could undermine the best prospects we have had for agreement,” Gapes wrote.

The British report notes that Iran has fully implemented its obligations to restrict its nuclear program under last November’s interim accord but says that “not enough is being done to put into practice” the provisions of the agreement “designed to facilitate trade with Iran in humanitarian goods.” Although the interim joint plan of action promised to “establish a financial channel to facilitate humanitarian trade for Iran’s domestic needs using Iranian oil revenues held abroad,” the report says, “in practice, it appears that the UK has not specified any banks to provide the necessary financial channel,” even though the US government “provided letters of comfort to selected banks to reassure them that it was permissible to access Iranian oil revenues for humanitarian trade.”

Indeed, a US source familiar with such transactions who spoke to Al-Monitor on condition that he not be named, said that banks in Switzerland and Japan appeared to be handling Iranian business but that these channels were established only at the end of May — just two months before the interim accord is due to expire. A spokesperson for the US Treasury Department, who also spoke on condition of anonymity, told Al-Monitor, "we can confirm that the US government facilitated the creation of humanitarian channels in Switzerland and Japan." The spokesperson added, "these channels are not designed exclusively for, or limited to, US exporters."

Other topics covered by the British paper included the recent decision to re-open the British Embassy in Tehran three years after the premises in downtown Tehran were trashed by a government-tolerated mob protesting British imposition of sanctions on Iran’s central bank. The committee, composed of Conservative, Liberal Democrat and Labour Party members, welcomed that decision but suggested that it had taken too long.

The lack of formal representation in Iran “hinders the UK’s ability to shape events, gather information, build the personal contacts which are essential to constructive diplomatic relations and reassure its regional allies that it could make fully informed assessments of Iranian opinion and intentions,” the report says. “We heard that the prolonged period of silence between the UK and Iran had resulted in the UK being less visible in the country, and that other countries are now looked at as better choice partners in international relations.”

The paper says British objectives in Iran should include:

The report, noting historical animosity between Iran and Britain over the latter’s former colonialist behavior and close association with the United States — “the ultimate bogeyman for Iran” — suggests that at some point Britain should apologize for its involvement in the 1953 coup that overthrew Iranian Prime Minister Mohammad Mossadegh, as well as recognize “the scale of Iranian suffering” during the 1980-88 Iran-Iraq war. In return, Iran might make “a similar public gesture recognizing its own support for terrorism, attack on the British Embassy or other past behavior.”

The report also has an interesting analysis of Iranian President Hassan Rouhani, whom it calls “a pragmatist who hopes to improve standards of living in Iran by persuading the West to lift sanctions, while retaining in place as much of the country’s nuclear program as possible.”

The five permanent members of the UN Security Council plus Germany (P5+1), who have been negotiating with Iran, “can have confidence that he is an authoritative representative of Iran,” the report says. “We also believe that, having stood on a platform of achieving an economic revival by negotiating with the P5+1 and getting sanctions lifted, he is genuinely committed to a sustainable deal. For now at least, he should be trusted; but he should be judged by his actions, not by his words.”