Yemen has been stuck in a "transitional phase" while the state is collapsing as a result of failing government performance and a decline in basic services for citizens. 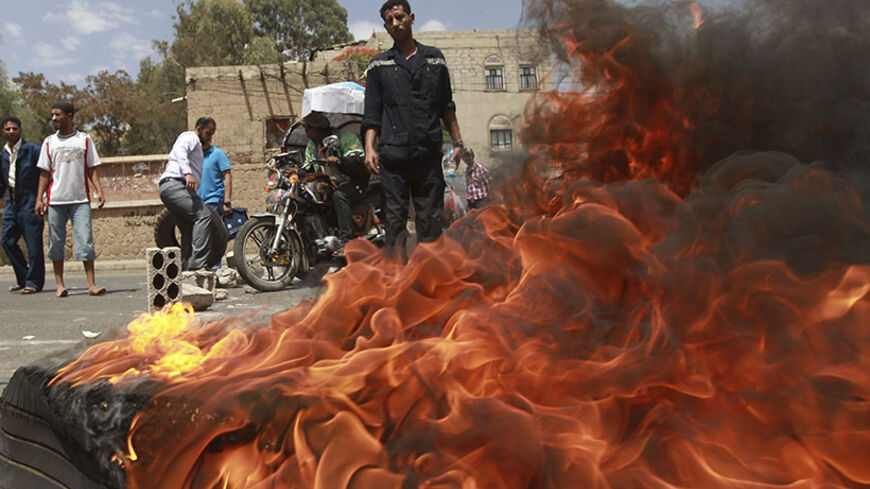 Yemeni parties have been fond of the term “consensual legitimacy” since 2010, when opposition parties that fall under the umbrella of the Joint Meetings Parties (JMP) signed an agreement with the General People’s Congress (GPC), which was headed by then-President Ali Abdullah Saleh. The agreement stipulated postponing parliamentary elections — which have not been held since 2003 — until the electoral system and the Supreme Committee for Elections are reviewed and reformed.

The revolution exploded in 2011 and resulted in the Gulf Initiative, which produced a consensus president and a government of national reconciliation. This revived the concept of “consensual legitimacy,” which means the parties reach agreements by consensus. But conflict restarted, as happened with the 2010 agreement, and a political fight exploded in 2011. Then, the Gulf Initiative, signed in November 2011, was unable to achieve the minimum of the people’s aspirations amid the elites justifying the agreement’s defects. Despite that, the transitional phase, which was supposed to expire in February 2014, was extended under the pretext of political consensus and that the transitional phase was a “mission” and not a time period.

The Gulf Initiative lowered the ceiling of the 2011 Yemeni events. It turned a revolution into a mere crisis, as written in the agreement, which was opposed by some independent and partisan youths because it ignored the event’s popular factor and portrayed it as a political dispute among Yemeni parties. It also granted legal immunity for all crimes committed during Saleh’s rule for three decades.

But the Gulf Initiative was passed with the people’s consent under the pressure of the dire living situation, which included power outages and shortages of water, gasoline and diesel fuel. This means that providing basic services to citizens is the minimum required to maintain the legitimacy of any government. The Yemeni people agreed to the Gulf Initiative only because they wanted these basic government services. But the supply crises continued, raising questions about the legitimacy of the current government and why these services were not being provided.

In fact, “consensual legitimacy” raised several problems, most notably absolving everyone from responsibility by virtue of the power-sharing formula that spread the authority among all political parties. Thus, no single party can be held responsible for the government’s performance, and the political scene is devoid of an opposition party because all parties are in the government.

Moreover, the continuous extension of the parliament’s term has degraded its performance and weakened the people’s monitoring of the deputies, who have held their seats for more than 10 years. They are the product of an electoral process that happened at a time that Yemen has long since passed. After the 2003 parliamentary elections, the Sa’ada war took place in 2004, the Southern Movement evolved in 2007 and the popular uprising happened in 2011.

Thus, parliament no longer monitors the ministers' performance. Accountability sessions have become a farce of verbal debates, most notably about the parliament’s legitimacy. Parliament is controlled by the party of the former and current presidents, so only JMP ministers are interrogated. The consensual nature of the government has also made all government jobs consensual, whereby positions are filled based on partisan loyalty irrespective of competence. All that is happening in the absence of serious opposition. Indeed, the government’s consensual nature is preventing the various parties from questioning each other’s performances. The performance of JMP and GPC ministers is not questioned by the other parties. Government performance has become mediocre and the citizens are suffering from very poor basic services.

“Consensual legitimacy” is the legitimacy among political parties that are not close to the street, as evidenced by the Houthi movement being the one to speak for the Zaidi community in Yemen despite the presence of Houthis in all political parties and the al-Haq Party supposedly having a Zaidi reference. The Southern Movement has become the largest faction among people in the south, although all southern parties are present — particularly the Socialist Party, which ruled the south in the past.

What we have are parties that failed to express the people's views, which have produced political forces with objectives that are entirely outside the political process. To improve this requires not just reforming Yemen, but radically changing the basis of the state and establishing another state.

So the idea of “consensual ​​legitimacy” is incomplete in the absence of influential and effective political forces. The current forces cannot play the opposition's role by virtue of their demands, such as those of the Southern Movement and the Houthis. And this was the reason for the continuation of the political tension in the south and the armed battles in the north between the Houthis and Salafist groups.

During its legal mandate, the Gulf Initiative has failed to stop the armed conflicts, which increased with the rising disintegration of the army. The army was divided into two parts. The larger was in the hand of Ahmed Ali Saleh, the president’s son, and the other was in the hands of Gen. Ali Mohsen. Saleh’s part was broken up into several parts, some of which do not obey the republic's president and have multiple regional and tribal loyalties. Mohsen’s part is still loyal to its general, who did not obey the military restructuring decision and did not dissolve his military team according to the president’s decision.

Despite this, the team is still present amid silence by the president and the UN envoy. The armed conflicts have intensified in the far north, and the battles against al-Qaeda in the south heated up although the Gulf Initiative’s main aim was to prevent war in Yemen. The initiative has failed to prevent war in the transitional phase without the extension, so why should that phase be extended?

The transitional phase in Yemen has made people look positively to the days of former President Saleh. Today, the economic situation has worsened and the armed conflict has increased. Government corruption is spreading because government jobs are handed out on a partisan basis. This raises questions about the legitimacy of the governing parties, especially with the extension of the transitional period without taking it to the people in a referendum, and in the absence of a representative parliament or even a timetable for the transitional phase. That phase has been extended for one year and is subject to further renewal under the pretext that the power-transition process is not finished in Yemen according to the Gulf Initiative.

It is worth noting that one of the reasons for the outbreak of the uprising in 2011 was because Saleh wanted to extend his term through a parliament that no one recognized as legitimate. This means that “consensual legitimacy” has become a mere fabrication of the political process. The transitional phases in Yemen are useless and have turned into a nightmare for the people and a heaven for the political parties, whose members get government jobs without having to show any competence and with no one holding the government accountable. Ending the transitional phase requires holding parliamentary and presidential elections, which the political parties fear because they have become far removed from the popular mood.