Re-emergence of the Yemeni left

Once a central fixture of Yemen’s political scene, the country’s leftist movement has been absent from the scene for the past two decades, but may be making a comeback. 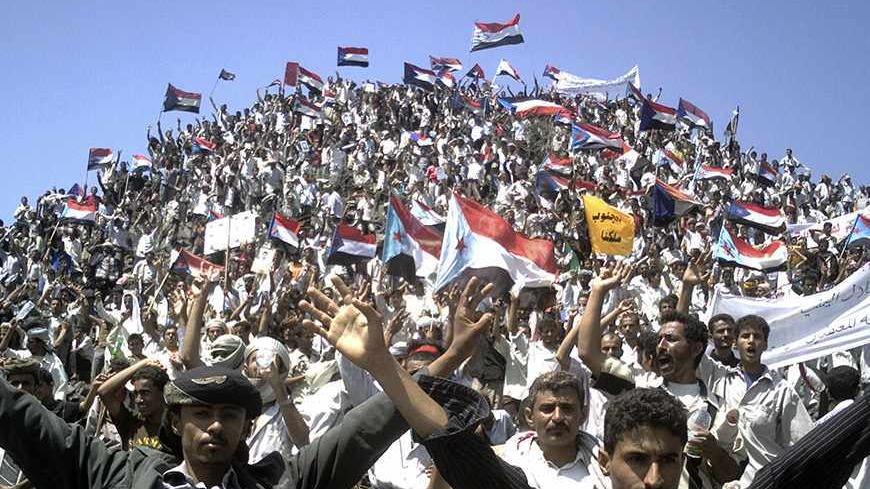 Anti-government demonstrators shout slogans and hold up flags of former South Yemen during a rally near the southern Yemeni city of Habileen, Oct. 14, 2009. A former socialist republic, South Yemen united with North Yemen in 1990 to form the Republic of Yemen. Protesters called for the secession of South Yemen from the Republic.

Years ago, no one would have expected an alliance to be formed between the Yemeni Socialist Party and the Yemeni Congregation for Reform (commonly known as Al-Islah, the Muslim Brotherhood in Yemen), particularly since both parties were ideologically at odds for decades and went through armed conflicts for years, the last of which took place in 1994. Today, however, it would appear that this alliance is actually forming.

In 1994, Yemen witnessed a devastating civil war. Huge losses were inflicted on the Socialist Party, especially after it announced its split from the north. The state of division that prevailed prior to May 1990 was restored, which led to the Socialist Party losing a large support base in the north. It was left alone to face the militants of the Yemeni General People’s Congress (GPC), the Socialist Party’s main partner in the unification of Yemen in 1990, and those of the Islamist Al-Islah, the ally of the latter back then, in addition to jihadists returning from Afghanistan. The alignment of all these parties against the Socialist Party came as a result of many considerations. The GPC, for example, wanted to get rid of its partner to monopolize its control in North and South Yemen after eradicating the military units of the Yemeni army, which were controlled by the Socialist Party, the sole ruling party of the south. Subsequently, the GPC would be able to put the unarmed Socialist Party at its mercy. For its part, Al-Islah wanted to become an exclusive partner of the GPC in governance and wished to eradicate the socialist ideology with which it was at odds for decades. Al-Islah perceived socialism as a branch of Soviet communist and atheist ideology, which also garnered the attention and ire of the jihadist Arab Afghans who had just come back from the battle fought with the Soviet Union in Afghanistan, which was directly sponsored by the United States and Gulf countries.

At the time, the Socialist Party was the most powerful flag bearer of leftist ideology in Yemen and the only party with a fully equipped army that could militarily and competently face other powers. The Socialist Party relied on this army to balance the bloody relationship of rivalry and distrust the party had with its new partners. This relationship, however, was forcibly transformed into a partnership based on the principle of “I bear arms so that I can trust my friends.” Destroying the military capacities of the Socialist Party, excluding it and confiscating its headquarters and properties were catastrophic for the party as it still struggles to mend itself today.

Before the unification of Yemen, the stronghold of the Yemeni left was in the south but had a wide base of supporters in the north as well, including a group of the party’s political and intellectual theorists such as Abdel Fattah Ismail.

Ismail controlled the south and tried to take over the north by supporting the wars of the National Front against the regime in Sanaa during his rule. Ismail believed, as the left did, in the importance of the unification of North and South Yemen. In addition, for years before unity and following the 1994 war, many northern leaders and thousands of northern supporters were subject to the violence of the regime in Sanaa — just as many were killed or arrested.

Currently, nearly 20 years after the war of 1994, the leftist socialists and their allies, along with their Islamist allies, have largely overcome the memory of the war. However, the former was unable to leave behind the impact of the fatwas issued by scholars belonging to Al-Islah against them, which allowed their political and ideological rivals to kill them. Al-Islah recently reneged on these fatwas after its former ally — the GPC — turned against it and subjected it to the same exclusion it practiced against the Socialist Party.

Around a decade and a half ago, a Yemeni political alliance comprising many political powers emerged under the name of the Joint Meeting Parties (JMP) bloc. Al-Islah is considered its largest component with the Socialist Party ranking second. Some observers in Yemen believe that the only commonality between these two powers is their animosity toward former President Ali Abdullah Saleh and his party. This alliance was deemed necessary between the two partners, who have more differences than similarities. This became even more apparent following the Yemeni Spring, as they built a partnership in governance. This came after they jointly took to the streets against Saleh in 2011 and after the serious competition they represented against him in the presidential elections of 2006 through an independent candidate who did not belong to either party. At the time, according to the election results, the votes they received did not exceed one-quarter of the electoral base.

The regime in South Yemen was the first and last Arab regime to adopt scientific socialism and the sole ally of the Soviet Union in the Arab peninsula. Although this gave the regime importance and strength, it also created a situation of economic subordination, which led the regime in the south to rush into announcing unity with the north in 1990.

When the National Liberation Front succeeded in ousting the British from South Yemen and taking power in 1967, a conflict between the components of the front flared up, leading the movements of Abdel Fattah Ismail and Salem Rubai Ali to turn against Qahtan al-Shaabi, the first president of the south. Subsequently, Ali assumed the seat of power as a successor of Shaabi. It is worth noting that Shaabi was killed in 1970 when he tried to flee the country — as did many of his supporters.

Years later, Ali was executed by those who helped him oust Shaabi, notably Ismail. This happened after the leftist powers of the National Liberation Front announced the formation of a new party, the Yemeni Socialist Party, in 1978.

The inability of the party to face the economic burdens of the state and society led it to heavily rely on the Soviet Union to support its national economy. Yevgeny Primakov reported Ismail as saying, “Since we chose the path of scientific socialism, it is the duty of the Soviet Union to provide us with help.” Ismail was the third president of the south to be ousted, which incidentally occurred at the hand of his friend Ali Nasir Muhammad. Ismail, however, temporarily escaped death, announcing his resignation and moving to Moscow in 1981.

Muhammad did not remain in power for long. A violent crisis erupted between the different wings of the party, known as the bloody incidents of Jan. 13, 1986, in Aden. Around 10,000 were killed as Muhammad left for Sanaa. Ali Salim al-Beidh succeeded Muhammad and became the last secretary-general of the Socialist Party to rule the south. Afterward, Beidh served as the vice president of the unified Republic of Yemen in 1990-94. He fled from Yemen to Oman after the forces who were backing Saleh at the time took over al-Mukalla in July 1994. The era where the Socialist Party was a ruler or a ruling partner ended. As a result, it was transformed into a weak opposition party, which miraculously preserved its existence.

JMP and the role of the left

After the leftist president defeated Saleh, the latter allied with Islamists against the president. The Socialist Party fought a legendary civil battle to persist after all its previous points of strength were undermined. Perhaps the party needed this to liberate itself from the history of armed conflict, which has developed hand in hand with its own history. Furthermore, the party has become the most prominent (not strongest) political party, and all eyes are on it to achieve the dream of the Yemeni civil state — a dream with obstacles that still outweigh its chances.

At the beginning of the millennium, the Socialist Party led the experiment to establish the biggest political alliance in the history of modern Yemen by forming the JMP. It also ventured to fulfill this end by allying with its former adversaries who remained for a long time at the base of its ideologies as opposing narrow-minded forces. Although Al-Islah is the largest of the JMP’s parties, the prominent socialist leader Jarallah Omar was the mastermind behind this idea, and he paid a high price for it since he was assassinated almost two years later. This idea succeeded in bringing the transitional political goals of the JMP closer. Two years ago, the most important of these goals was achieved when Saleh’s regime was toppled. Some even believe that this idea rectified the rhetoric of Al-Islah vis-a-vis its allies and deterred the development of a marginal conflict that would have been in the regime’s interest only.

The current and potential left

When the left ruled South Yemen, it led a huge modernization and urbanization campaign. It spread education, offered equal opportunities for both sexes, imposed the rule of the law, reinforced security and gave Yemen the best three years of democracy after the country had united. However, the left’s secretary-general, who had understandable motives, got carried away with the Gulf’s desire to discipline Sanaa and disintegrate Yemen by separating the country’s north from its south. If this had not happened, Yemen would have been in a different situation now.

Today, the Socialist Party is re-emerging, after having been excluded from the political scene in the 1994 war. This exclusion laid the foundations for the re-emergence of the southern cause — the most significant crisis currently being faced in Yemen. The party is now rising from the ashes to lead the rational, moderate and civil society supporters through the country’s political transition phase. More than any other politician, the secretary-general of the Socialist Party, Yassin Said Naaman, has earned the respect of the people. In fact, he has succeeded in maintaining it despite the attempt of other forces to use his actions against him when he allied with Al-Islah, while some of his own party leaders were against it. Some forces tried to use this situation and push the disapproving party leaders to work against the party, just like Iran has done by polarizing leftist journalists and leaders.

Yet, the Yemeni left has proven to be in very good shape at its “Social Justice and the Left” conference that was held in September in Sanaa. Can the Yemeni left rise again? It is difficult to tell given the haze that Yemen has been drowning in lately.