Turkey should close its border to ISIS

The Islamic State of Iraq and al-Sham (ISIS) has depended on the Turkish border for its operations in Syria; US Sen. Tim Kaine offers a blueprint for US-Egypt ties; Al-Monitor’s Year in Review and Back Channel. 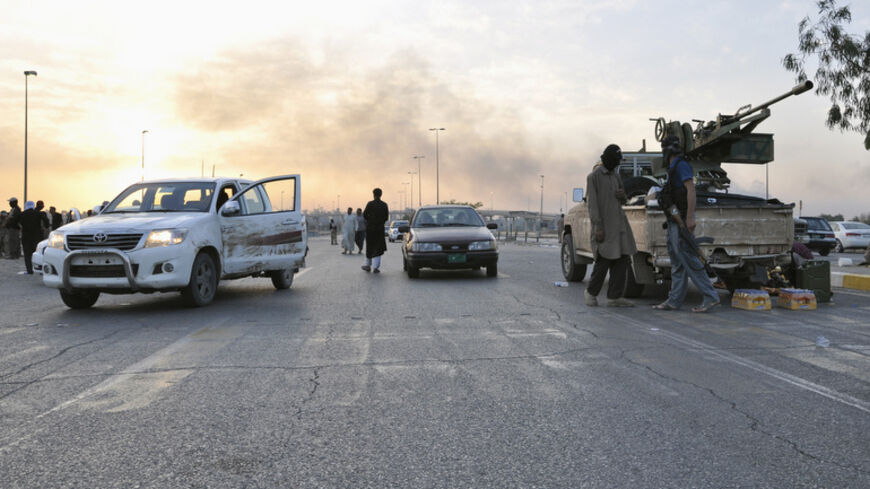 Fighters of the Islamic State of Iraq and al-Sham (ISIS) stand guard at a checkpoint in the northern Iraqi city of Mosul, June 11, 2014. - REUTERS

US President Barack Obama is reviewing a range of options to deal with the takeover of Mosul and other Iraqi cities by the Islamic State of Iraq and al-Sham (ISIS).

The prospects are daunting for Iraq, now split in three, to be put back together. The potential for a political dialogue among Iraq’s political factions, also urged by Obama, seems distant.

Even US airstrikes, which the administration is considering, would need to be coordinated with ground operations by the Iraqi army, whose effectiveness is in question after its collapse this week in facing ISIS.

US military intervention in Iraq has received a mixed reaction in Congress, as Julian Pecquet reports.

Obama said what happened in Iraq “underscored the importance” of his plan for a regional counterterrorism strategy.

This column has called for a regional counterterrorism effort among Syria’s neighbors, which would include Iran.

US Secretary of State John Kerry said on June 13 that ISIS is “a common threat to the entire region, including Iran.”

The time is now for the United States to implement a regional counterterrorism strategy that is not just about "training" regional forces, which is a long-term approach and, in the case of the Iraqi army, a failure, at least this week, despite it being a US priority for the past decade.

Better to start with some overdue counterterrorism basics, like coordination on border security to disrupt terrorist supply lines in allied countries.

And this means Turkey closing what Kadri Gursel calls its "jihadist highway," which has provided ISIS and other armed groups a lifeline in Syria.

While there is now the expected "who lost Iraq" arguments, perhaps a more prosaic and practical recommendation at the top of the "coulda, shoulda" list should be demanding that Turkey finally crack down on terrorist traffic across its borders, as this column has advocated.

One wonders where ISIS would be today if Turkey had gotten serious about shutting the border after the May 2013 terrorist bombing at Reyhanli, which killed at least 50.

Instead, Turkish Foreign Minister Ahmet Davutoglu blamed the "Syrian regime," seeing some utility in its failed regime-change policies in Syria by looking the other way as terrorists crossed from Turkey to Syria, as recounted by Semih Idiz in his column describing Turkey’s better-late-than-never designation of Jabhat al-Nusra as a terrorist group this week.

Cengiz Candar writes that the blowback from Turkey’s failed Syria policies will now likely redound to Davutoglu himself.

As Amberin Zaman reported this week from al-Tleiliye, in the Kurdish region of Syria, Syrian Kurds continue to blame Turkey for backing ISIS militants.

Shutting down Turkey’s terrorist traffic, while not an answer in and of itself, would have a more immediate impact than, for example, providing more arms to Syria’s moderate opposition.

This column has backed arming the opposition as a means to leverage a negotiated solution, but it is probably a stretch to believe that such a force could take on both ISIS and Syrian government forces.

The more urgent answer does not lie in "ramping up" yet another armed group, but engaging the states of the region on immediate steps to control borders, share intelligence and consider combined counterterrorism operations.

Central to any success in Iraq is whether Turkey and Iran will find common ground in their policies toward Iraq and Syria, as Idiz writes. Iranian President Hassan Rouhani’s visit to Turkey this week may have opened the door to a renewed security dialogue between the two countries whose actions could prove to be the most decisive in Iraq.

If there is opportunity in crisis, we have the crisis. The United States, Turkey, Iran and all the states in the region share an interest both in defeating ISIS, which has announced Islamic law in the areas it controls in Iraq, and in not letting Iraq devolve into another long and costly civil war.

In an exclusive article for Al-Monitor, US Sen. Tim Kaine, D-Va., a member of the Senate Foreign Relations Committee, offers a three-part plan for rebuilding US-Egyptian relations after the election of President Abdel Fattah al-Sisi.

Kaine calls for "a clear path for a 21st century US-Egypt relationship that protects our interests and is consistent with our values. That should include a shift for future military spending from the purchase of conventional big-ticket items to counterterrorism and counterinsurgency equipment and training. On economic support, the administration should focus its assistance on programs that help Egypt build a middle class, whether that’s small business development, education, water or infrastructure."

Al-Monitor this week launched "Year in Review," our interactive timeline of stories featured in our Week in Review column. Scroll through the timeline to look back on the events and trends that shaped the region, catch up on developments that you may have missed and find out what's behind the stories on today's front page. Check back regularly as we update our timeline for 2014 and browse the full Year in Review for 2013 below.

Al-Monitor this week expanded our Back Channel content highlighting in-depth coverage of decision-making in Washington and throughout the Middle East. The Back Channel features exclusive original reporting by Laura Rozen and other Al-Monitor columnists and contributors. Articles on the Back Channel page can be found here.