Despite harsh legislation and intense police work, synthetic drug abuse is on the rise among low-income Turkish youths, including in conservative neighborhoods. 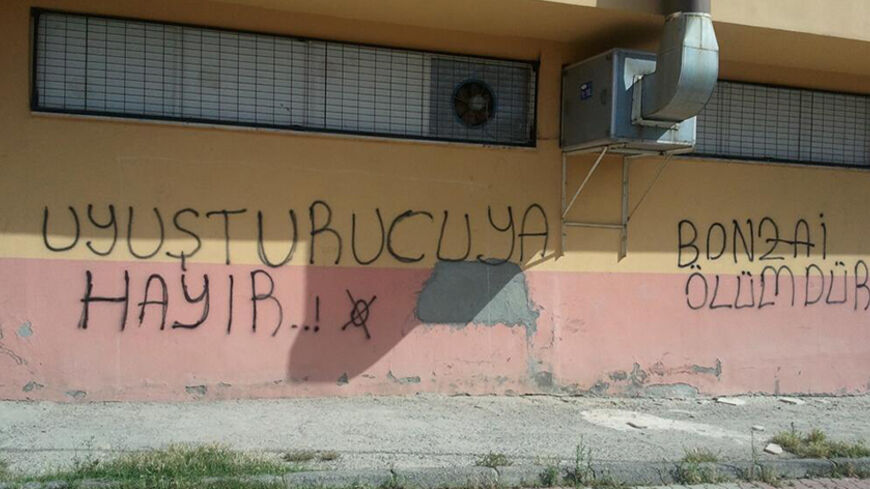 Graffiti on a wall in Istanbul's Umraniye district reads "No to drugs! Bonzai is death!" June, 26, 2014 - Twitter/Meralink

ISTANBUL — On June 23, I was in a taxi in Istanbul that took a wrong turn and ended up in a neighborhood where a group of young men were crowded onto a street corner, chatting loudly. The driver, who had already informed me that he was a full-time physical education teacher and part-time taxi driver, pointed to the young people and said, “These are the druggies, and they are all over these impoverished neighborhoods now. It's gotten worse in the last couple of years.”

For decades poor Turkish youths have been sniffing “torba,” a bag filled with a mixture of cheap chemicals, to get a quick high. When I asked the driver if he was referring to torba, he said, “That's passe. The kids now use some kind of chemical drug, “bonzai” — as in the tiny, precious Japanese bonsai trees, but spelled with a "z" in Turkish.

On the same day, it was announced that a 20-year-old conscript, Volkan Senyurt, while home in Basaksehir, Istanbul, had died using this new drug. It also made the news that an 18-year-old boy had died from a bonzai overdose in Bursa.

The next day, having traveled to Dudullu, a neighborhood in Istanbul’s conservative Umraniye district, was another eye-opener. A drug addict’s mother told Al-Monitor, “My son is 22 years old. I had to kick him out of the house because of his addiction. I discovered he was abusing bonzai two years ago, then I learned that he had given some to his sister. She is only 12 years old. That is when I had to ask him to leave. I fear of hearing bad news every day.”

The 12-year-old told Al-Monitor that she had once smoked bonzai that her brother had given her and was paralyzed by it. She also could barely see. The girl said, “I wanted to cry because I was so scared, but I couldn't even do that. My brother told me to relax and it would help me to feel better, but I did not.” Luckily for her, the effects of the drug eventually wore off.

Bonzai is cheap. One man on the street, a suspected dealer, told Al Monitor, “It would be the best two liras [approximately $1] you ever spent, sister. You'll forget about all your troubles. This is all natural. Look, it's a plant.”

To the contrary, bonzai is a highly addictive synthetic drug that has been spreading throughout Turkey at an alarming rate since 2009. A police officer with Istanbul’s Narcotics Bureau told Al-Monitor, “If we put pins on the map in the districts where the drug is popular, we would see that there is no correlation of bonzai to ideological association. We see similar numbers of addicts in both “Islamist” and leftist neighborhoods. The common factor is that all of them are socioeconomically underdeveloped districts, where unemployment and poverty levels are high, and education levels are rather low. The drug dealers are so desperate that we've caught a few selling to primary school kids age 10.”

While chatting with the officer, a few helicopters flew by rather low. The officer said, “A new operation is underway. Hundreds of officers from different bureaus are joining us to catch the drug dealers. We receive several complaints a day.”

Bonzai, classified as the most dangerous drug in Turkey, is known to produce extreme feelings of anxiety, causing many victims to die of heart attacks. Hence, it is difficult to accurately measure the real impact of the drug. Addicts refer to this feeling as a “death trip,” during which feelings of fear climax in a panic attack, which sometimes leads to heart failure.

Hamit Aytar, a neurosurgeon at Acibadem Health Group, explained, “Bonzai is a synthetic cannabinoid, an agent that causes serious levels of anxiety, paranoia, delusion and chest pains. It leads to heart failure and uncontrollable bleeding, and in most cases it ends with a painful death.”

Bonzai is quite unlike marijuana, a plant-based drug that produces cannabinoids and tends to have a calming effect. As noted, bonzai and other synthetic cannabinoids, such as Jamaican Gold, have the opposite effect. Aytar highlighted a crucial factor in trying to monitor legal uses of synthetic cannabinoids. He said, “They can be found in the most unlikely places, such as plant fertilizers.” This makes the job of law enforcement all the more difficult.

Turkey has traditionally been a transit country of intense drug trafficking. Drug abuse and rehabilitation, however, never surpassed today's levels. Data from a 2013 report by the Turkish Monitoring Centre for Drugs and Drug Addiction (TUBIM), under the Ministry of Interior, show that for 2011-2012, seizures of bonzai increased nine-fold, while the number of individuals arrested for dealing and possession increased 58-fold.

The 2014 report, in progress, will provide a evidence of whether this represents an upward trend, but for now, all the news points to the use of bonzai and other synthetic drugs as being on the rise. Still as TUBIM’s report highlights, compared to drug abuse in other European countries, Turkey's is quite low. Most users are males between the ages of 18 and 34, and Istanbul leads in bonzai-related arrests and incidents.

In 2011, Turkey had passed legislation to ban synthetic cannabinoids, but that has not deterred smugglers and dealers. Many dealers are reportedly switching from selling heroin to bonzai, because as an addict in the Dudullu district said, “You can sell much more in a short time.” Known as the “poor man’s heroin,” bonzai is targeted at impoverished youths who have little means to seek rehabilitation.

On June 18, the Turkish parliament passed legislation introducing harsher punishments for drug dealers, especially if their victims are minors. Indeed, the government and the Green Crescent are working on the issue, and the media have reported intensively on the problem in the last couple of weeks to raise awareness. With the face of the drug market ever-changing, Turkey must accept that the problem of drugs is here to stay, even in conservative regions.