As a solution to a growing drug epidemic in Turkey, President Recep Tayyip Erdogan is advocating compulsory religious education to improve moral values. 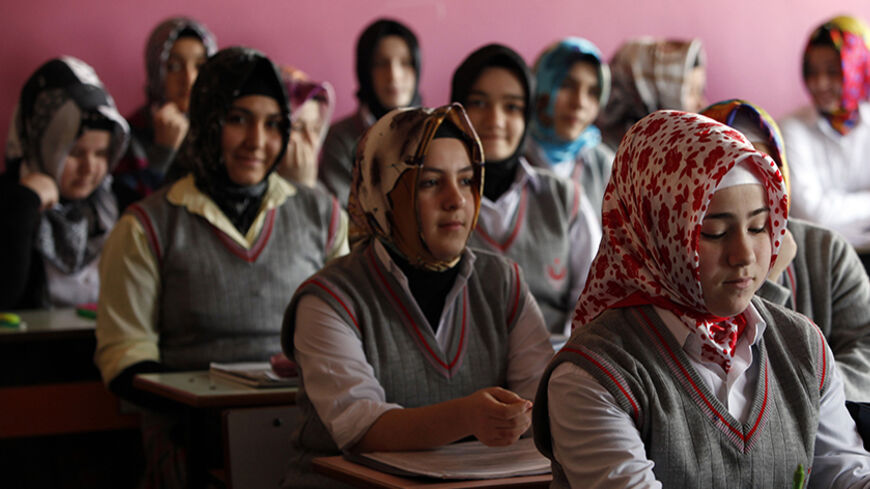 President Recep Tayyip Erdogan delivered a searing address Sept. 29 at the Turkish Green Crescent Society’s International Drug Policy and Public Health Symposium in Istanbul. Erdogan made several “headline-making” statements during the speech. One highlight was his reference to a European Court of Human Rights ruling that called on Turkey to halt compulsory religion education and moral values courses. Erdogan criticized the decision from a mind-boggling perspective, stating, "You will never see a debate over compulsory physics, mathematics or chemistry lessons, but for some reason, religion classes are always debated. If you lift compulsory religion and ethics classes, drugs, violence, and racism will fill the void." He added, “If you are asking for compulsory religion classes to be abolished, then you should not be complaining about drug addiction, violence, anti-Semitism or Islamophobia.”

Erdogan did not even spare the Islamic State (IS) in his battle cry against Turkey's problem of increasing drug abuse. He explained that there are thousands of Western fighters joining IS and stated, “I believe not all of these are Muslims. Some of them are drug addicts. Some of them are prone to violence.” He concluded that the trigger for drug addiction, terror and violence is greed.

This is not the first time Erdogan has spoken of Islamic piety as a cure for addiction. He appears to be convinced that drug addiction is also the result of moral degeneration due to Westernization. Erdogan has said multiple times that his government’s quest is for Turkey's youths to avoid the trap of drugs, so they can have strong morals.

Prime Minister Ahmet Davutoglu and several other Justice and Development Party (AKP) members have echoed Erdogan's argument that religious education is a must for a drug-free society. The importance of religious education was defended most passionately by Burhan Kuzu, an AKP Istanbul parliamentarian and professor of constitutional issues. Kuzu tweeted, “So 20% of IS members were Harvard graduates. There are ones with PhDs. A decent education does not prevent one from becoming a terrorist. Correct religious education is a must.” Kuzu has been mercilessly mocked for his reference to Harvard.

Ihsan Karaman, director of the Green Crescent, has argued on multiple occasion that Turkey’s war on drugs has been ineffective. There are significant reasons for the AKP’s failure in this area. First and foremost, the AKP administration’s drug war, unlike its (quite successful) campaign against smoking, is not a public health campaign that aims to reduce the mortality rate for drug-related deaths and health problems, such as AIDS and hepatitis, related to drugs. In speeches by Erdogan and Health Minister Mehmet Muezzinoglu, drug addiction is a stage that youths in demoralized Westernized countries experience. It is fair to say that the AKP’s drug-demonization policies are designed with Islamist utopian morals in mind rather than health care. One indication of this is the protocol the Green Crescent Society signed with the Religious Affairs Directorate to cooperate in the battle against drugs.

In June, Al-Monitor investigated bonzai, the latest drug craze among Turkey's poor suburban youths, and concluded that the AKP has initiated sufficient laws and regulations to punish drug dealers promptly and harshly. Since then, the government has become more strict, with Davutoglu declaring, “Drug dealers will be treated as terrorists.” Almost every day, Turkish papers report on major narcotics operations against drug dealers. Figures released by the Health Ministry indicate that the number of drug abusers seeking treatment increased 1,781% from 2004 to 2012.

No data show that bonzai and other drugs are used less in conservative neighborhoods than elsewhere or that Islamic education — which has been part of the curriculum for 32 years — is a panacea for drug use. An employee from the Ministry of Health told Al-Monitor, “Secular Turks struggle to afford a pleasant evening at a pub with friends, enjoying a couple glasses of wine, while conservative or pious men from our office all go to smoke hookahs. They all know the hookah is worse for your health than wine, but as AKP supporters, they cannot be seen in public enjoying wine.”

As tweets and comments on social media networks questioned Erdogan’s arguments, Mustafa Mutlu, a columnist for the daily Aydinlik, wrote a piece citing several cases of imams who have been charged with narcotics-related crimes, raising the question of exactly how much religious education is required to keep people away from drugs. Data from countries where Islamic education is the norm and strict alcohol and drug prohibition laws are enforced, such as Afghanistan and Iran, show that they too are experiencing large-scale drug epidemics.

A retired police officer who served in the Narcotics Department from 2006 to 2014 in Istanbul and Bursa told Al-Monitor, “Strict alcohol restrictions and price hikes on alcoholic beverages created a de facto prohibition regime in Turkey, especially for young and poor people. This led to a shift toward the production and sale of more concentrated and cheaper forms of intoxicating substances. It is easier to sell and hide a pack of bonzai than a bottle of beer. So in conservative neighborhoods, it is also easier to buy bonzai anytime than wine or beer.”

Extreme and criminalized drug prohibition policies have thus far delivered less than effective results in Turkey, and it is unclear how religious education can help. Drug addicts are simply seen as lost causes to be kept out of sight, out of mind. In several conservative neighborhoods, including the Basaksehir district of Istanbul, there have been multiple anti-drug protests and arrests of drug dealers. There have even been drug-related deaths reported in mosques. Trying to ban all forms of addictive goods — whether alcohol, cigarettes or hookahs — has backfired, as more dangerous drugs became readily available to much younger people, from conservative families and others.

In addition, the open border policy that Turkey has kept in place since the start of Syrian civil war in March 2011 has allowed not only innocent victims of the conflict to enter the country, but drugs as well. Cheap synthetic drugs, such as bonzai and ecstasy, are now easily available, even in residential neighborhoods of many cities. One suspected drug dealer in Basaksehir told Al-Monitor, “There is no need to take the risk producing bonzai at home, because it comes prepackaged and cheaper than water for us.”

There also is a lack of treatment facilities for drug users. In addition, most users are too scared to seek help because of the potential legal consequences, not to mention their being ostracized. There are a number of related, unanswered official inquiries from members of the opposition parties for the AKP in parliament. That many rehabilitation centers lack the proper testing tools for new drugs, such as bonzai, is simply being ignored by the government.

After listening to Erdogan, one could not help but wonder how religious education can provide adequate protection from the dangers of narcotics, as the facts tell a different story. The melding of a prohibition culture with utopian Islamist morals leads to punitive drug policies that are costly and ineffective at reducing drug use. One social media comment summed it all up: “Damn[,] the mosques are closed today! Let’s do coke!”