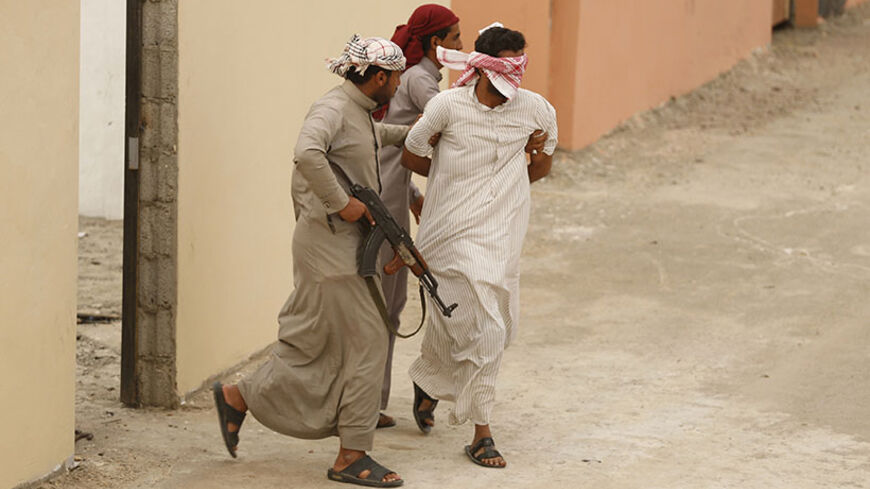 Members of Saudi special forces simulate a scene kidnapping a man by terrorists during a training session in Darma, west of Riyadh, March 26, 2014. - REUTERS/Faisal Al Nasser

After the adoption of the new Saudi law criminalizing terrorism and its financing, rights activist Waleed Abulkhair wrote on his Twitter account: “I wonder who will be classified as the No. 1 terrorist? Who will have the honor to be sentenced under this law?” But Abulkhair did not anticipate that that person would be him.

According to a statement issued by the Monitor of Human Rights in Saudi Arabia, which is headed by Abulkhair, the seventh session of his trial was held in Jeddah on May 25. This came after the presiding judge decided that the rights activist would be tried under the anti-terror law issued on Dec. 16, 2013, because his pro-rights actions and criticism of authorities constituted an act of terror.

It should be noted that the law against terrorism and its financing expanded the definition of a terrorist crime to include any act that harmed the reputation or standing of the state, or attempted to coerce authorities into doing or refraining from doing something. In other words, under this generalized description, any act of protest or criticism could be construed as being terrorist.

Upon the law’s announcement, Amnesty International issued a statement saying that this law will entrench existing patterns of human rights violations and serve as a further tool to suppress peaceful political dissent. Meanwhile, the Saudi Council of Ministers described the law on Dec. 16, 2013, as one built on achieving a balance between the need to face dangers and the respect of human rights.

The list of charges against Abulkhair, as published by the Saudi Monitor of Human Rights, included seeking to undermine the state, disobeying the king, insulting state officials and inflaming public opinion against them, disparaging the judiciary and accusing it of lacking integrity, inciting international organizations against the kingdom and establishing the Monitor of Human Rights, which transgresses on the jurisdiction of the Human Rights Commission and the National Society for Human Rights; in a summary list of the charges that the judge decided satisfied the description of terrorist acts, as defined by the law against terrorism and its financing.

A video was uploaded to YouTube on May 25, before the trial, showing Abulkhair talking about freedom, in what appeared to be part of a series of discourses titled “Waleed Abulkhair Speaks,” which he recorded shortly prior to his arrest, so that they may be broadcast after his anticipated imprisonment. This series may be seen as Abulkhair’s attempt to maintain a presence, even if locked up in prison. This type of reaction to an activist’s arrest is new to Saudi Arabia, where activists were quietly detained without leaving behind anything to remind people of their existence. Abulkhair was mindful of this fact and decided not to let his arrest be a path toward his own oblivion. At least that was his intent, which he may or may not succeed in achieving.

The phenomenon embodied by Abulkhair is worthy of reflection. He represents a new generation of Saudi activists possessing a strong understanding of the changes occurring in the world, and of the concept of the modern state. A generation that believes in democracy as a model of governance, in the need to someday guarantee global human rights, and a generation that thinks that fighting terrorism must be subject to human rights standards. No wonder then that this category of people is growing by the day among the younger generation in Saudi Arabia, aided by modern social networking and their intermingling with other peoples through education that affords them an opportunity to explore and compare.

A study conducted by University of Maryland researcher Mansoor Moaddel between 2003 and 2011, and published in 2013, indicated that belief in human rights was growing among the younger generation of Saudis.

The trial of a rights activist such as Abulkhair under the law against terrorism and its financing comes in the context of a more comprehensive Saudi perspective. The latter involves securitizing the public domain and classifying many peaceful actions as threats to security, thus requiring a heavy-handed response, as a result of the changes taking place in the Arab world, in the form of uprisings, revolutions and crises that have spread there since 2011.

As far as activists are concerned, criminalizing the many forms of freedom of expression — such as writing data, or through bringing to trial those who tweet, share videos on YouTube or carry out other peaceful acts — has nothing to do with confronting terrorism and violence. Moreover, these activists believe that confronting terrorism requires opening the public sphere and expanding the political participation while showing commitment to the fight against terrorism and compliance with global human rights standards. All of this should be coupled with security efforts aimed at detecting and tracing terror cells.