Saudi Arabia has cracked down on prominent rights activists in recent weeks, forcing many to go underground. 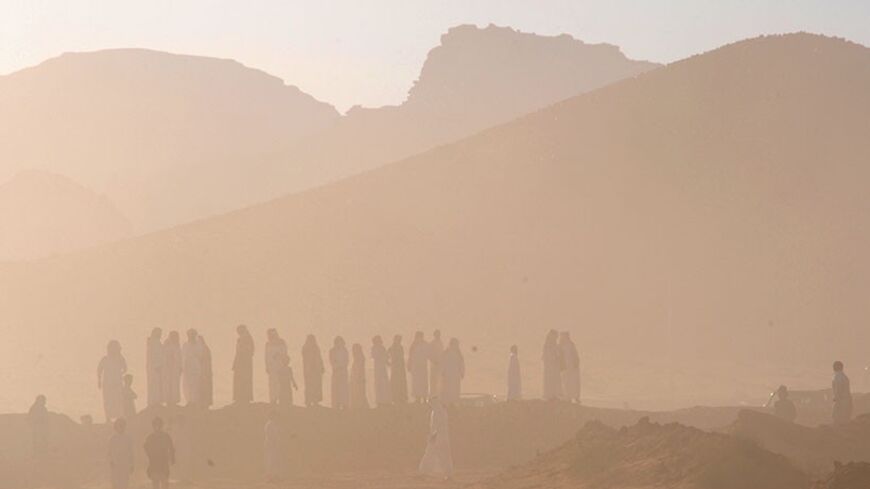 The first time I came across Waleed Abulkhair's name was about five years ago, when I was following Samar Badawi's case. Badawi was being abused by her father, and despite medical and psychological reports from Saudi hospitals and shelters proving this, a court ruled in her father's favor and sent Badawi to prison on charges of disobeying her father.

For seven months, Abulkhair desperately tried to get her released, but to no avail. He then proposed that they go public, with an online campaign about Badawi's situation. She agreed, and the ensuing publicity shamed the courts into releasing her within six days from the start of the campaign, which immediately went viral. Abulkhair proposed marriage to Badawi, and it took six months of court procedures to release her from her father's guardianship to Abulkhair's. One of my favorite interviews is a 2011 BBC radio program featuring the couple, during which they talk about their love. Badawi is currently eight months pregnant with their first child.

The literal translation of Waleed's surname is "father of all good," and I cannot think of a more appropriate name for him. Until his arrest on April 15, he had been tirelessly advocating for the rights of all citizens, regardless of gender, sect or tribe. He volunteered to defend the blogger Raif Badawi when most Saudi lawyers would not want Badawi’s case and their name mentioned in the same sentence, let alone the same paragraph.

Badawi had created a liberal forum encouraging religious discussions. Unsurprisingly, in space devoid of religious dialogue, Badawi's liberal forum attracted people from across the kingdom. Badawi was subsequently charged with insulting Islam and breaching Saudi Arabia's cybercrime laws in setting up the forum. He was sentenced to 10 years in prison, 1,000 lashes and a fine of 1 million riyals ($270,000). Badawi can appeal, but he will have to do so without his lawyer.

Abulkhair had organized a weekly open house featuring talks by influential thinkers. These gatherings, in Jiddah, would get so crowded that most visitors could not find a place to sit. Abulkhair called these meetings "smoud," which translates as "steadfastness" or "resistance." His only condition was that attendees take to heart each other’s right to freedom of expression. Now the word "smoud" has become synonymous with Abulkhair and a motto for his activism.

Abulkhair is currently being held and prosecuted as a terrorist on 11 charges, including breaking allegiance with the king, doubting officials' good intentions, insulting the judicial system, making international organizations hostile to the kingdom, establishing the Monitor of Human Rights in Saudi Arabia and potentially compromising public order.

Abdulaziz Alhussan, a Saudi human rights lawyer who fled to the United States, called 2013 “one of the worst years we are facing in Saudi Arabia,” and so far 2014 has not been much better. The sentences handed to other activists who started local independent human rights organizations do not bode well for Abulkhair. On March 9, 2013, Mohammad al-Qahtani was sentenced to 10 years in prison and a subsequent 10-year travel ban, and Abdullah al-Hamid was sentenced to 11 years in prison. Both Qahtani and Hamid were tried for the same basic activities for which Abulkhair is being charged. The name of the organization they co-founded is the Saudi Civil and Political Rights Association.

Fadhil al-Manasif is another activist who participated in a local, nongovernmental human rights organization, the Adala Center for Human Rights. The charges against him are similar to those against Abulkhair. On April 17, Manasif received a 15-year prison sentence, a 15-year travel ban after completing his sentence and a fine of 100,000 riyals ($26,700). The list of names goes on. Some activists went to prison, while others fled the country before trial or signed pledges to cease all forms of activism.

Many activists with whom I spoke regard this as a time for hibernation. The new terror laws — under which the definition of terror includes “harming the reputation or status of Saudi Arabia” and makes “disturbing the social fabric or national cohesion” a punishable offense — are so broad that they severely restrict freedom of expression. This has driven the majority of activists concerned about the country's future underground.

Many Saudis have stopped expressing their opinions in such public forums as Twitter and Facebook and have chosen instead more guarded options, such as Whatsapp, Telegram and Path. The stranglehold on expression of dissent makes the future of Saudi Arabia more difficult to read. Diminishing freedoms and security to publicly discuss issues facing the country has made the reality on the ground more volatile.