President Hassan Rouhani's public battle with hard-line clerics over Iranians' route to heaven is symptomatic of the broader war he faces over his reform efforts. 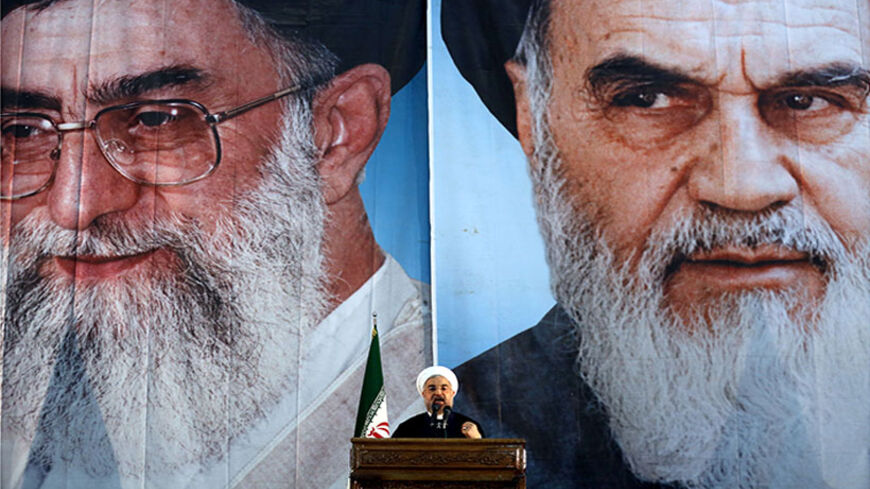 In the last two weeks, the tit-for-tat exchanges between Iranian President Hassan Rouhani and his hard-line opponents have grabbed the headlines, not only inside Iran but around the world. Triggered by the arrest of six young Iranian men and women who had created a video of themselves dancing to Pharrell Williams’ hit song “Happy,” Rouhani remarked May 24 in a speech, “Do not interfere so much in people’s lives, even out of compassion. … Let people choose their own path to heaven. We cannot send people to heaven by force or a whip.”

The statements seemed a departure from the paternalistic approach, including the imposition of religious codes of conduct that the Islamic Republic establishment has adopted since its inception. Rouhani’s comments are less about the philosophical approach to enforcing cultural norms as they are about accepting realities of Iranian society and preserving and expanding his own political base.

Rouhani’s statements provoked fierce reactions from the conservative camp. The war of words peaked when the outspoken and ultraconservative senior cleric Ayatollah Mohammad Taghi Mesbah Yazdi stepped in. Addressing Rouhani as “some individuals with official authority who wear a turban,” he asked, “Where did you get your religion from? From Feyziyyeh [a seminary school in Qom] or England?”

It is noteworthy that in the aftermath of the disputed 2009 elections, Mesbah Yazdi remarked in support of then-President Mahmoud Ahmadinejad, “When a president is endorsed by the [supreme leader], obeying the president is like obeying God.” Ostensibly, as required by the Iranian Constitution, Rouhani was also endorsed by Iran’s supreme leader before taking office.

Rouhani possesses notable political and religious credentials, as far as the Islamic political system is concerned. Religiously he is a "mujtahid," a Shiite expert and scholar who can interpret legal issues not explicitly discussed in the Quran. Politically, he has been involved at the highest levels of government, including as deputy commander during the war with Iraq, for 16 years as the secretary of the Iranian Supreme National Security Council (SNSC) and for 23 years as the supreme leader’s confidant, acting as his representative in the SNSC until his election last June. So the question that begs an answer is: Why has Rouhani engaged in this battle against the hard-liners? There are three reasons that may explain this move.

First, Rouhani, as a pragmatist who has been a major player in the security-related issues of the country, views the current trend of cumbersome restrictions on personal freedoms impractical, ineffective and unsustainable. At the center of his fight with the hard-liners lies the Internet. He knows the hard reality that Internet users use anti-filters to circumvent blocking systems and access any banned website they wish.

In an interview with Iranian weekly Chelcheragh in July 2013, he remarked, “I wish the supporters of filtering could explain how they have succeeded in limiting people’s access to the news.” He added, “They are afraid of people’s freedom in the 'virtual environment,'” the term used in Iran for the Internet. “Filtering is ineffective … and only heightens the wall of mistrust between the people and the government.”

Second, during last June’s elections, Rouhani and his team realized the significant role that the Internet could play in mobilizing supporters. While hard-liners controlled official media outlets such as Islamic Republic of Iran Broadcasting, the only way that his camp could counter the monopoly was through the Internet. It's no wonder that he worked to unblock Twitter and Facebook. Rouhani and his Foreign Minister Mohammad Javad Zarif were the first high-ranking Iranian officials to set up their own official Twitter and Facebook accounts.

Third, Rouhani and his government already have the support of religious moderates. By opening up society, as he promised to do during his campaign, he would be able to attract the liberal faction within it, primarily comprised of young urbanites. This will not only strengthen his and his administration’s position to confront the hard-line camp but will also boost the legitimacy of the system as a whole, after it was significantly damaged during the crackdowns on the protests of the 2009 presidential elections. The latter can help him on the foreign front, especially resisting US pressure in the nuclear talks.

It is true that his approach may alienate a part of the conservative block. However, it will likely also strengthen his social base considerably. It is worth noting that during the last year's elections, the hard-liners’ candidate, Saeed Jalili, collected 4.2 million votes, 11.4% of the total ballots. Significantly, Rouhani defeated Jalili by a margin of greater than 44% in Qom, the purported center of Iranian conservatism.

It could be argued that although conservatives are small in number, they maintain a powerful position in the Iranian establishment. Therefore, they could increase their efforts to weaken and paralyze Rouhani and his administration. This is a possibility, but three factors should be considered.

First, if Rouhani chooses to be silent with respect to the issue of civil rights, he will risk losing those who voted for him based on this campaign promise. Second, the outcome of the nuclear talks with the world powers could be a game changer. A nuclear deal involving a tangible easing of sanctions can potentially place Rouhani in a stronger position to stand up to his opponents on domestic issues. And third, the position that Ayatollah Ali Khamenei takes in this quarrel will be decisive.

Iran’s supreme leader may be reluctant to confront Rouhani. To him, Rouhani is cut from a different fabric from that of the previous presidents, Ahmadinejad and Mohammad Khatami. After all, Rouhani, as Ayatollah Khamenei’s confidant, has been in charge of the SNSC, the highest advisory arm to the supreme leader in the most sensitive security-related domestic and foreign affairs for many years. Neither previous president has had such a close personal relationship with the supreme leader. Particularly as the nuclear negotiations progress, Ayatollah Khamenei may find it imprudent to attack Rouhani during this sensitive time.

There are some signs that a decision has been made to try to bring the situation under control. During the June 6 Friday prayer, Ayatollah Movahedi Kermani, the former representative of the supreme leader in the Revolutionary Guard Corps, did not touch on the recent developments, nor did he criticize Rouhani for his recent statements. As a Persian saying goes, whether the fight is “fire under the ashes” remains to be seen.