The Israelis have slapped travel bans on many Palestinians in the West Bank in response to the June 12 kidnapping of three teenagers. 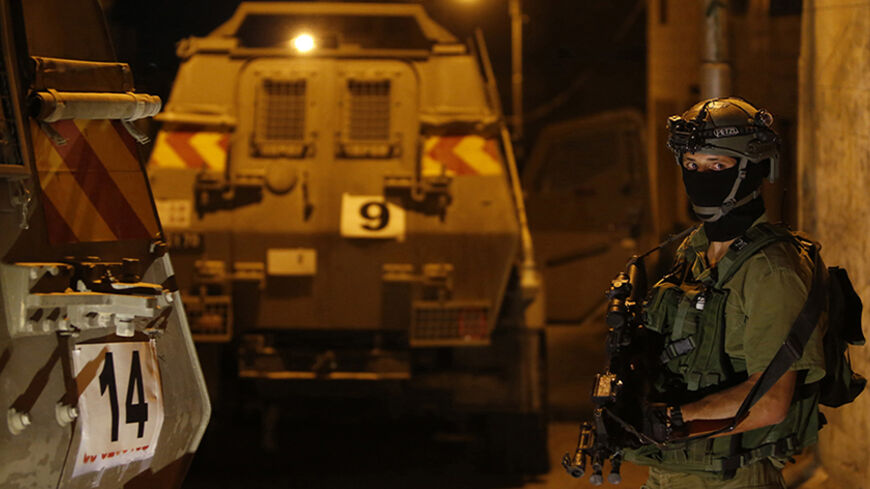 Seif Abu Arqoub, 5, was born in Amman while his parents were students at the University of Jordan. Upon completion of their degrees, the Arqoub family returned to Nablus, the hometown of Abla, Seif's mother. Abla teaches at Al-Najah University in Nablus and Mohammed, Seif's father, is a lecturer at Birzeit University. Except for short visits to his grandparents’ home in the Hebron district town of Dura, the young Abu Arqoub only knows Amman and Nablus.

But this week, the Abu Arqoub family has been collectively punished. A planned summer vacation before the beginning of the holy month of Ramadan was abruptly canceled. Mohammed wrote on his Facebook page that because of his birth in the Hebron district, the family will not be allowed to leave via the Allenby Bridge to Jordan, the only border crossing that Palestinians in the West Bank are allowed to use. The collective punishment on all Hebronites comes as Israel takes revenge on the Palestinian population following the kidnapping of three Israeli teenagers on June 12.

The travel ban on Hebronites is only one of many acts of collective punishment. Workers from Hebron with valid permits to work in Israel were banned entry into Israel and a huge dragnet took place throughout the occupied territories, arresting mostly known Hamas figures. Israel killed a 19-year-old Palestinian at the Jalazone refugee camp outside Ramallah during the arrest sweep. Abdel Aziz Dweik, speaker of the suspended Palestinian Legislative Council, is among those detained by Israel. Also among those arrested are former ministers, parliamentarians and former prisoners pardoned as part of a prisoner swap that included the exchange of Israeli soldier Gilad Shalit.

Article 33 of the Geneva Conventions prohibits occupying powers carrying out such acts of punishment. The 1949 convention states: “No protected person may be punished for an offense he or she has not personally committed. Collective penalties and likewise all measures of intimidation or of terrorism are prohibited. Pillage is prohibited. Reprisals against protected persons and their property are prohibited.”

The focus on Hamas appears to be the result of an Israeli belief that such a well-planned kidnapping could not have been carried out by an amateur group. A previously unknown group, Ahrar al-Khalil (Free of Hebron) issued a communiqué taking responsibility for the kidnapping and vowing to use it to secure the release Palestinian prisoners. Israeli Prime Minister Benjamin Netanyahu publicly put the blame on Hamas and US Secretary of State John Kerry seemed to agree with this conclusion, saying, “Indications point to Hamas' involvement.”

Israel’s extensive arrest campaign has three purposes. One is to help lessen public anger. For instance, a Facebook page in Hebrew calling for the execution of a “Palestinian terrorist every hour the teens are held” received over 15,000 likes within hours of its creation.

Israel also hopes for some intelligence information from those arrested to get an indication of the inner circle of those behind the kidnapping. Thus, Israel hopes it can use those arrested as bargaining chips in any future negotiations. This is what Israel did when Gilad Shalit was held by Palestinians and exchanged for Palestinian prisoners, many of whom had been arrested after the kidnapping.

If the Hamas connection proves to be true, it would reflect the feeling of political surrender that has been forced upon the Islamist movement in the reconciliation process with the PLO. The kidnapping of the teenagers in Hebron also comes as Israel refuses to concede to prisoners in administrative detention on hunger strike since April 26. Over 100 Palestinians have been striking to end the practice of arrest without charge or trial.

The teenagers' kidnapping also reflects a deep-seated anger by the Palestinian population in Hebron, which is routinely harassed by the youngest of settlers, denied use of their own roads and forced to rely on foreign volunteers to get their children to safely cross the street to school.

The kidnapping of the Israeli teenagers points to an even greater problem that stems from the absence of any political horizon. With the failure of the Kerry initiative and the political retreat by Washington, the sense of hopelessness among Palestinians has been rising, making room for radical groups to try to prove that their violent ways are the only means that work with the Israeli occupiers.

Young Seif Abu Arqoub and his family, along with all Palestinians, will be trapped in Palestine this summer. But the really bad news is that both sides are trapped by policies that are contrary to the spirit of peace.

Unless the long-term goal of ending the occupation and giving Palestinians a sense of hope for the future is achieved, it is difficult to imagine that either side will enjoy peace and tranquility.