Kidnapping of Israeli boys 'no joke' for Palestinians

Israel is tightening its grip on the West Bank and intensifying mock air raids over the Gaza Strip, as Palestinians anticipate an Israeli response to the June 12 kidnappings. 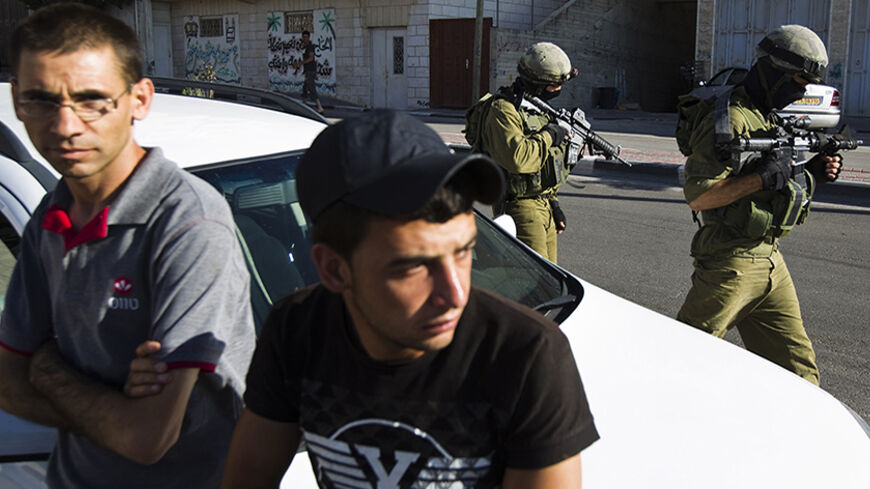 GAZA CITY, Gaza Strip — With every passing hour since the abduction of three teenagers in the West Bank on June 12, questions increase over what Israel will do and whether it will launch a new military offensive against the Palestinians.

Everyone is waiting for any information that might reveal the three kidnapped teenagers' fate, which the Palestinians say Israel is not divulging.

A high-ranking security source in the West Bank told Al-Monitor over the phone that Israel has tightened its grip on the territory, “Nobody knows whether the abduction was made by an Arab or Palestinian party. The Israelis have closed all the regions,” the source said. “They are the only ones issuing media statements and releasing information, whereas the statements of the Palestinian Authority (PA) came within a general political framework.”

A security source in the Gaza Strip told Al-Monitor that the government’s security centers have been evacuated, presumably out of fear of a possible Israeli strike.

Hamas spokesman Sami Abu Zuhri told Al-Monitor, however, that they did not make the decision. “These centers are not ours. We are done with the government,” he said.

“Israel is conducting a large-scale military operation against Hamas and the Palestinian people. The ongoing air raids in the Gaza Strip constitute a dangerous escalation. The occupation should bear the consequences,” he said, clarifying that the current incidents will not weaken the resistance, but increase the people’s support for it.

Abu Zuhri considered that the Israeli field operation in the West Bank and Gaza Strip indicates a constant struggle: “The occupation [Israel] does not know what it is doing. It has to end the crimes against our people and the Palestinian detainees who might die at any minute due to the open hunger strike.” He indicated that the international community should assume its responsibilities regarding the situation of detainees in the Israeli occupation’s prisons.

Meanwhile, Hamas leader Ismail Radwan believes nothing verifies the Israeli accusation that Hamas kidnapped the three Jewish teenagers near Hebron. Radwan told the local Media 24 website, “Until now, no Palestinian group has confirmed the Israeli story. We are still waiting.”

“If no Palestinian party claimed responsibility for the operation, it does not mean that there hasn’t been an abduction. It has happened, but the circumstances and details are unknown. Israel, which is obsessed with security, cannot scare its society and raise doubts about its security abilities for the sake of a staged act. It would not risk its reputation. Moreover, we should not forget that the abducted people might have been the victims of organized crime in Israel,” Naim told Al-Monitor.

“The abduction has happened. It is not a joke,” he said.

“Indeed, they kidnapped the three settlers from the street of Etzion where they were hitchhiking. The operation took place in Area C, which is not under the control of the PA but of Israel,” the source said.

Whether the operation was conducted in Area B or C, political writer Atef Abu Seif believes that the worst has already happened for Israel, as the three teenagers are now missing.

Abu Seif told Al-Monitor: “[Israeli Prime Minister Benjamin] Netanyahu will conduct a political, not a military operation. Even if he occupied the West Bank, or carried out assassinations in Gaza, he will eventually form an alliance with the extremist right, pass a political process related to joining the settlements together and draft legislation to protect them. Field reactions and bombardment are done to absorb the wrath of the people in Israel because the operation passed under the radar.”

He noted that bombarding both the West Bank and Gaza as well as considering them as one security zone, in terms of the political and military response, is done to reshuffle the cards. Abu Seif said, “If Israel thinks that those who gave orders are in Gaza, it is distracting them from managing the operation in the West Bank through this bombardment and punishing them at the same time.”

“Under the radar” is an expression that Israeli Security Minister Moshe Ya’alon used when he talked to Israeli newspaper Haaretz on June 14. He said that this operation passed under the radar, pointing at the street where the three teenagers were kidnapped, which is a stone’s throw away from a military compound affiliated to the settlement of Gush Etzion.

Ya’alon added that in 2013, more than 30 kidnapping attempts were foiled, and another 14 attempts since the beginning of this year.

Member of the political bureau of the Popular Front for the Liberation of Palestine (PFLP) Kayed al-Ghoul believes that the Netanyahu government is taking advantage of the kidnapping operation to perform aggressions against the Palestinian people to achieve a number of goals in terms of evading its responsibilities toward the peace process or in an attempt to pressure the PA to pay a political price.

Ghoul told Al-Monitor that the policy of Netanyahu to expand the settlements, refuse to acknowledge the rights of the Palestinian people besides detaining thousands of them, isolating Jerusalem and ignoring hundreds on hunger strike are the reasons that led to such an operation. “This is why Israel has to reconsider its calculations and take responsibility,” Ghoul said. “Netanyahu wants to hold the Palestinians responsible for the kidnapping of their settlers, while Israel is kidnapping the Palestinian people and taking thousands of prisoners.”

Political analyst Hani Habib believes that the picture will remain vague as long as no party claims responsibility for the operation. “There are many scenarios and various doubts. I believe that since these three went missing last Thursday, and Israel is exerting efforts to find them, it means that there has indeed been a kidnapping operation,” he told Al-Monitor. Habib said that until the details were revealed, Israel would convey messages to all parties, particularly Hamas and Palestinian President Mahmoud Abbas, such as threatening them with military operations.

“Until then, Israel will not conduct a large-scale military operation. It will only bombard in response to the missiles launching from Gaza,” Habib said.

On the ground, the situation is different. In front of a big screen set up in al-Andalous cafe overlooking the Sea of Gaza, Mohamed Dawahidi watches the World Cup match between France and Honduras. Every few minutes, he receives news flashes about developments of the kidnapping operation on his phone. He reads them, then puts his phone down. Israeli military aircraft patrol without distracting him from watching the match.

He relayed his impressions to Al-Monitor: “Gaza is a magical and exceptional place. We are living now under an Israeli threat; yet, at the same time we are watching the World Cup. There is no stability, but there is also no fear.”