Hamas believes Israel is trying to exploit the murders of three settlers in the West Bank to destroy the Palestinian reconciliation deal. 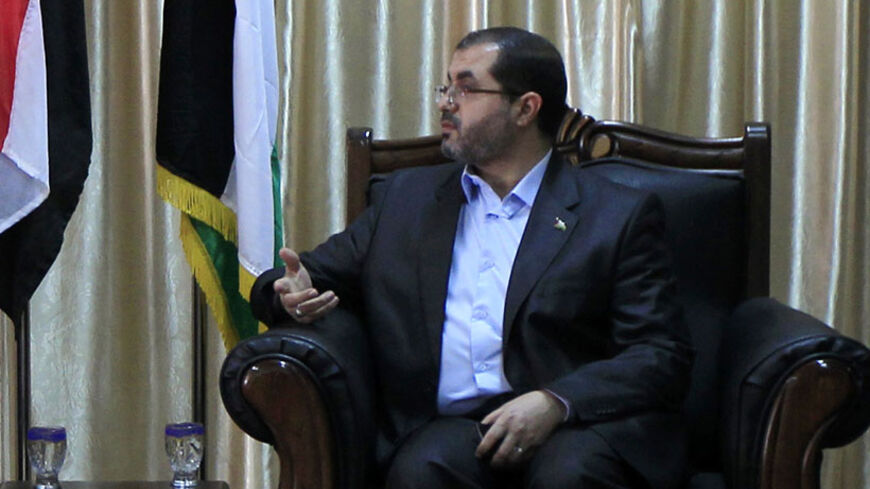 Hamas member Bassem Naim attends a meeting after his arrival through the Rafah border crossing in the southern Gaza Strip, Nov. 19, 2012. - REUTERS/Said Khatib

GAZA CITY, Gaza Strip — Hamas remains committed to Palestinian reconciliation, contrary to reports suggesting the deal might fall apart because of Israeli pressure in the wake of the kidnapping and murder of Israeli and Palestinian teenagers. Strong Israeli opposition has largely rendered the Palestinian unity government unable to bring about desired changes on the ground, despite its receiving endorsements from the European Union and the United States.

After the announcement of the government, bringing an end to seven years of division between the West Bank and Gaza Strip, Israel tried but failed to stymie international backing and recognition of it. It has, however, succeeded in exploiting the kidnapping and killing of the three teenagers to incite against Palestinian President Mahmoud Abbas.

In light of recent crises, Gaza residents seem skeptical of the possibility that Prime Minister Rami Hamdallah’s government will succeed in achieving true reconciliation and restore unity between the two territories. Prominent among the crises are the government’s inability to pay the wages of former Hamas government employees and the emergence of public disputes between the factions over the issue.

Hamas official Bassem Naim expressed his displeasure over the unity government's handling of the salaries issue. He thought the matter would be easily overcome, but instead, he believes, its resolution was intentionally delayed out of fear of Israeli pressure. Naim told Al-Monitor, “Israel was incapable of preventing reconciliation between Palestinians, in light of the clear European support afforded to the new government. Still, President Abbas seemed uninterested in moving forward with achieving unity for irrational reasons.”

The Palestinian government has blamed the nonpayment on international pressure threatening to impose financial sanctions on it if it paid the salaries of employees previously appointed by Hamas. Naim rejected this contention, stating, “We have met with many European diplomats who never raised this matter. The issue is solely related to Israeli pressure.”

Netanyahu’s Arabic-language Facebook page published a photograph showing an Israeli Civil Defense member fighting a fire at a Sderot factory after it was hit by a rocket launched from Gaza. The captioned reads, “Since the formation of the Fatah-Hamas alliance government, 70 rockets and mortar rounds have been fired from the Gaza Strip on Israel. President Abbas must end his alliance with the terrorist Hamas organization.”

The crisis between Fatah and Hamas escalated when Mousa Abu Marzouk, deputy chairman of Hamas’ political bureau, wrote on his Facebook page, “I fear that Hamas will be forced to backtrack for the sake of security and the safety of its people. For Gaza is living in limbo, it is neither under the purview of the old government, nor is it the responsibility of the national unity government.”

A knowledgeable Hamas source who talked to Al-Monitor on the condition of anonymity said that Hamas’ political bureau had recently met in the presence of the movement’s political and military leadership and decided to irrevocably move forward with the reconciliation. According to the source, “The political bureau, in all its components, affirmed that the reconciliation option was a conscious and strategic one taken by Hamas. It will not be reversed irrespective of all the present crises, with Hamas exercising political and field pressure to make it a success. Halting the effort fulfills Israel’s goal of sabotaging and ending the alliance. The ongoing threats to launch a military attack on Gaza and the incitement against Hamas aims to push Abu Mazen [Abbas] into forsaking Hamas, a scenario that we will tirelessly work to prevent.”

Abbas’ popularity has suffered in the West Bank and Gaza Strip as a result of his statements on security cooperation following the kidnapping of the settlers, while Israeli accusations blaming Hamas for the kidnapping have bolstered the movement's popular standing. Many Palestinians believe that Israel’s aim — in its raids on West Bank cities, arrest campaigns and almost daily bombing of Gaza — is to exploit the killings by convincing the Palestinians that reconciliation between Hamas and Fatah will serve no good purpose.

The columnist Alaa Abu Amer, who resides in Ramallah, ruled out Israel’s ability to thwart the Palestinian reconciliation, given the support afforded the new government by the United States as well as European and Arab countries. In a phone interview with Al-Monitor, he said, “In the end, Israel will be compelled to deal with the new government. But the issue still requires a lot of coordinated effort between all parties, with the fait accompli finally prevailing, if Fatah and Hamas actually intend to make it succeed.”

According to the Hamas source, movement members are angered by the Palestinian Authority’s (PA) silence on the Israeli accusations leveled against it for the kidnappings and Israel’s effort to spare the authority in its smear campaign. Israel no longer holds the PA responsible for the kidnappings, instead concentrating its attacks on Hamas.

Israel appears to be trying to foil the implementation of the reconciliation agreement and render the Palestinian unity government ineffectual by refusing to deal with or even recognize it, and by preventing Gaza and West Bank ministers from traveling between the two territories. After the discovery of the bodies of the teenagers, the Israeli government’s purpose became clearer in its targeting of Hamas on the West Bank and its threats to attack Gaza without threatening the same against PA institutions. The Palestinian people’s ability to withstand the Israeli onslaught might thwart Tel Aviv’s intentions.