More than 100 Palestinian detainees being held by Israel without charge continue their hunger strike, but no one seems to notice. 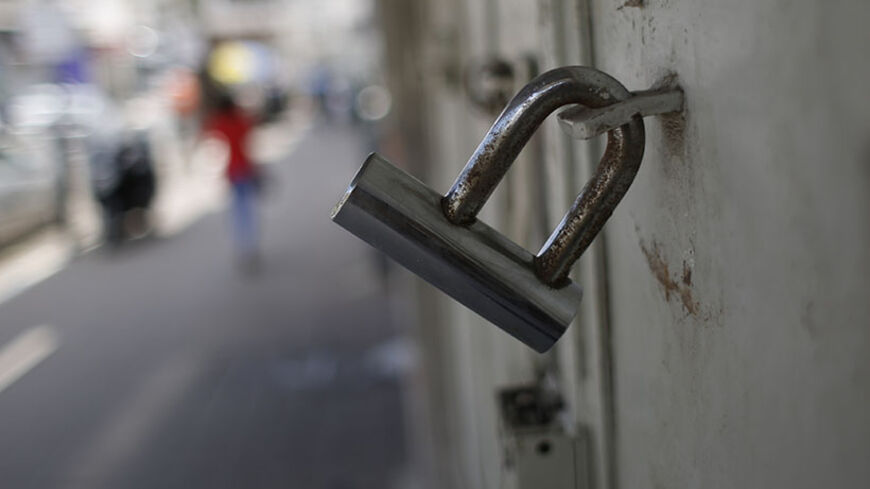 Shops are shuttered in Ramallah in solidarity with hundreds of Palestinian prisoners on hunger strike against Israeli detention without trial, June 8, 2014. - REUTERS/Mohamad Torokman

A courageous Palestinian hunger strike is nearing its 50th day, yet it has barely made a dent on the local, regional or international scene. Palestinian administrative detainees — those being held without charge or trial — are with their stomachs fighting an unjust practice carried out by a country that claims to be a democracy, but no one is paying attention. Israel currently holds 189 Palestinians under administrative detention, and 100 to 125 of them have been on a hunger strike since April 24.

On June 6, more than 40 days after the beginning of the strike and after 70 prisoners were transferred to hospitals, UN Secretary-General Ban Ki-moon publicly spoke out against the detentions, urging Israeli authorities to release the prisoners or charge them. The secretary-general’s statement came a day after the UN Special Committee to Investigate Israeli Practices Affecting the Human Rights of the Palestinian People and Other Arabs of the Occupied Territories urged Israel to heed the demands of Palestinian prisoners concerning what it called “arbitrary” detentions. “It is a desperate plea by these detainees to be afforded a very basic standard of due process: to know what they are accused of and to be able to defend themselves,” said the committee after a fact-finding mission that also included visits to Amman and Cairo. The committee stated that the massive hunger strike is in response to a lack of due process, as the administrative detainees are subject to unlimited renewals of their detention period, again without formal charges against them.

To bring attention to the plight of these prisoners, Palestinians in the West Bank held a partial general strike on June 8. In Gaza, hundreds of citizens held a candlelight vigil. Demonstrations in solidarity with the prisoners have also taken place in a number of countries, but they have attracted little notice. Social media efforts to bring attention to the hunger strike chose the hashtag #Water_and_Salt in Arabic, with the hope that it would generate international support, like the 2012 strike led by Adnan Khader, which succeeded in pressuring the Israelis into forgoing renewal of his administrative detention order.

Various other efforts have been made to humanize the hunger strike — including publishing profiles of the doctors, parliamentarians, teenagers and school teachers taking part — but, again, with little success. The strike has been eclipsed by major news from the region, including the visit of Pope Francis to the Holy Land, the Egyptian elections and inauguration of a new president and the ongoing violence in Syria, Iraq and Yemen. Meanwhile, Ukraine captured most of the international headlines.

Palestinian news and news about Palestine have focused much more on the Fatah-Hamas reconciliation and recognition of the new Palestinian unity government headed by Rami Hamdallah than on the hunger strike. Even Palestinian President Mahmoud Abbas, who attended the swearing-in of the new Egyptian president, Abdel Fattah al-Sisi, and flew to the Vatican for a prayer for peace with Pope Francis and Israeli President Shimon Peres, did not have a chance to mention the hunger striking prisoners.

As a result, Israel has not felt much direct pressure. The Israeli Knesset is even discussing a bill that would allow the force feeding of hunger striking Palestinian prisoners. The proposed legislation is being publicly opposed by Israel's main doctors' association, which says the practice amounts to torture. The Israeli government also feels relaxed enough to push for a new law that will forbid the release of Palestinian prisoners without the approval of an Israeli court. It would apply only to future prisoners convicted and sentenced to life without parole.

Reuters quoted the Palestinian lawyer Jawad Bolous, who visited eight of the hospitalized prisoners, as saying, "The weight of striking prisoners has gone down by an average of 16 kilograms." As the hunger strike continues, medical experts have warned of the risk of death facing those taking part in the strike. Doctors say that after three to four weeks of abstaining from food, by which time some 18% of body weight is lost, individuals risk their medical complications becoming permanent.

Palestinian supporters did succeed, however, in raising some awareness by protesting at the annual general meeting of the multinational security giant G4S, a supplier of security equipment to Israeli prisons. The protests, which included individuals who bought symbolic shares to legally attend the meeting, were violently removed by guards. The Bill & Melinda Gates Foundation reacted by dumping its G4S stock. The company has decided to phase out its prison contracts in Israel over the next three years.

The success of the G4S protests notwithstanding, the hunger striking prisoners have an uphill battle with an apathetic Israeli government and an international media overloaded with other Middle Eastern stories. Any success by the hunger strikers will result solely from their steadfastness and courage. Expectations that the justice of their cause will produce results goes beyond a statement by the UN secretary-general and a special UN committee.