Israelis ask whether Obama has given up on Iraq

The crisis in Iraq has only sharpened the perception by Israelis that Barack Obama is now willing to act with resolve in the Middle East. 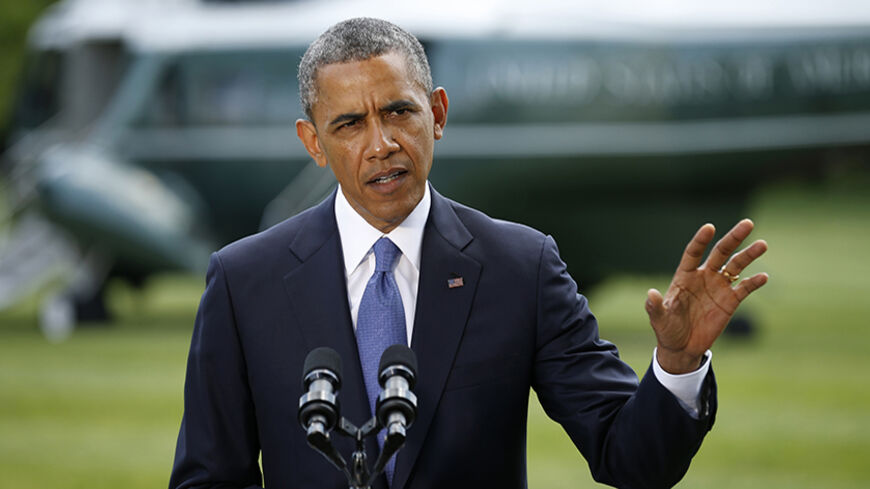 US President Barack Obama speaks about the situation in Iraq from the South Lawn of the White House in Washington, June 13, 2014. - REUTERS/Kevin Lamarque

The situation in Iraq, which is directly linked to the situation in Syria and which, in turn, has direct impact on the situation in Lebanon, Turkey and Jordan, has been the focal point of frenzied discussions in Israel's defense establishment as well as among its decision-makers. There is one thing, however, that most assessment bodies agree on: It is highly likely that the Kurdish autonomy in northern Iraq will shortly announce its independence, leading to the establishment of the separate state of Kurdistan. This estimate, which has been voiced for a very long time in Israel's corridors of power, was significantly substantiated this week. This, when the Kurds took advantage of the chaos created by the fall of Mosul into the hands of the Islamic State of Iraq and al-Sham (ISIS), taking over Kirkuk, the most important oil-producing city in that region, in what is seen as a demonstrative and resolute power display.

Established on the ruins of what used to be Saddam Hussein's Iraq, Kurdish autonomy has been in recent years an island of stability, sanity and economic prosperity, enjoying a high degree of personal safety. The Kurds, who have not had an independent state to date, avoided pulling the rope too tight and did not declare a state. This was partly because they are surrounded by historically natural powerful enemies — chief among them Turkey — and partly because they saw no existential need to do that.

Now, Israeli officials estimate, they are very close to taking that step. The hostile elements surrounding them have considerably weakened. Some are disintegrating quickly (Iraq), others are preoccupied with domestic strife (Turkey); some are at war (Syria, etc.) while others are on the defense (Jordan). If not now, then when?

The disintegration of Iraq has given rise to renewed reflection in Israel as regards the American policy in Iraq. The scathing criticism that is occasionally leveled by Jerusalem and Tel Aviv at the Obama administration policy, which culminated in what was published and ascribed to the Israeli defense minister, Moshe Ya'alon, has become more outspoken in closed forums. Israel makes sure to be respectful of the Americans, as it still licks the wounds of the last conflagration on the Washington-Tel-Aviv front. But these opinions are being expressed and heard with mounting volume at those discussions.

"The problem with the Americans," a senior diplomatic Israeli official said this week, "is that they don't have a middle ground. Either they fight with might and main, as they did in Iraq and Afghanistan, or they raise their hands in unconditional surrender, as has President Barack Obama done in the past five years." No one disagrees — not even in Israel — that the American war in Iraq was one of the most uncalled for and embarrassing wars in history. Everybody, not least the Iraqi people, misses Saddam Hussein today. The American problem is that they went too far and came on too strong in Iraq, Israeli officials contend. Now they leave hurriedly while shunning altogether any type of involvement. "When you are the only responsible adult left in the world, you can't afford to walk off the ring. You can't afford to lose your deterrence. You can't maintain some kind of world order without carrying a large stick in your hand and making the radical elements believe that you're actually capable of using it," a senior diplomatic official in Jerusalem said this week in a closed talk.

Added an Israeli defense official who is versed in American activity in the Middle East: "The Americans need to understand two things. The first thing is that there is no such thing as 'blitzkrieg' in the Middle East. Things go on for years. Processes take a long time to mature. Sometimes mirages replace reality, vanishing just as abruptly as they appear. The second thing," he continued, "is that you don't always have to launch an all-out war, landing tens of thousands of troops, hundreds of tanks and huge logistics that cost trillions. In other words, you don't need to conquer Iraq and you don't need to invade Afghanistan. Given American air capabilities, most problems can be resolved that way. The Americans — with their technological supremacy and means that can be employed from aircraft carriers, such as unmanned drones and accurate intelligence — can seriously hamper the advance of al-Qaeda insurgents, for example, yet without paying a price."

Israeli security officials find it hard to understand why the Obama administration fails to grasp the perilous process taking place in the Middle East following its total abandonment by the "world cop," which is what the United States once was.

"As time goes by, it becomes increasingly apparent that President Obama is simply unwilling to do anything real. As a result, the boldness of the militant groups increases," said an Israeli defense official. "It is no wonder that a terrorist organization that until not that long ago was only marginal and insignificant, such as ISIS, suddenly allows itself to conquer a large city in Iraq and start marching toward Baghdad. They wouldn't have done so if they had known that someone was unwilling to accept such a development and had enough planes, drones and technology to destroy them from the air. That the Americans no longer agree to intervene in what involves 'boots on the ground' is both acceptable and understandable. Yet that doesn't mean you have to give up and take off. In the Middle East, the Persian Gulf and North Africa, there's no vacuum. If you walk away, someone else comes in your stead. Unfortunately, in our region, that someone else is usually radical Islam, global jihad or al-Qaeda and its various and sundry affiliates."

Israel, for now, does not regard the spread of jihad to be a direct security threat. In recent months, the Egyptians have been making an effort, which Israel says is "earnest and resolute," to fight Ansar Bait al-Maqdis, al-Qaeda's local branch in the Sinai desert. The success is encouraging and Egypt's determination has shown effective results on the ground. This success notwithstanding, the prospect that parts of northern and western Iraq, together with parts of Syria, would turn into a jihadist terrorist state — which will exploit the weakness in Syria, Lebanon and Jordan while increasing its influence and expanding its terrorist activity westbound — has lately drawn a great deal of attention in Israel.

This week I asked a seasoned Israeli defense official what enabled such a terrorist organization to beat the highly trained and well-equipped Iraqi military. His reply was simple: "That's exactly what happened to the Palestinian Authority and its security bodies headed by Mohammed Dahlan, which lost to an inferior Hamas force in the Gaza Strip during the coup in 2007. When one side has a better life and all it wants is to return home safely, while the other side is prepared to fight and lose its life for the cause, the latter wins. The Iraqi soldiers serve in the military for a paycheck. Watching swarms of jihadists advancing and seeing the decapitated bodies of those who didn't flee in time, they drop their weapons and run for their life. That's what happened in Gaza and that's what is happening in Iraq. And in those cases, there's simply no other way. In order to save the day, what you need is a strong, skilled and powerful force to step in."

I asked my source whether there was such a force in the region today. Hesitating slightly before replying, he said, "I'm not really sure."