A dispute over broadcasting rights has led the Lebanese to temporarily ignore political crises and focus on ways to watch World Cup games. 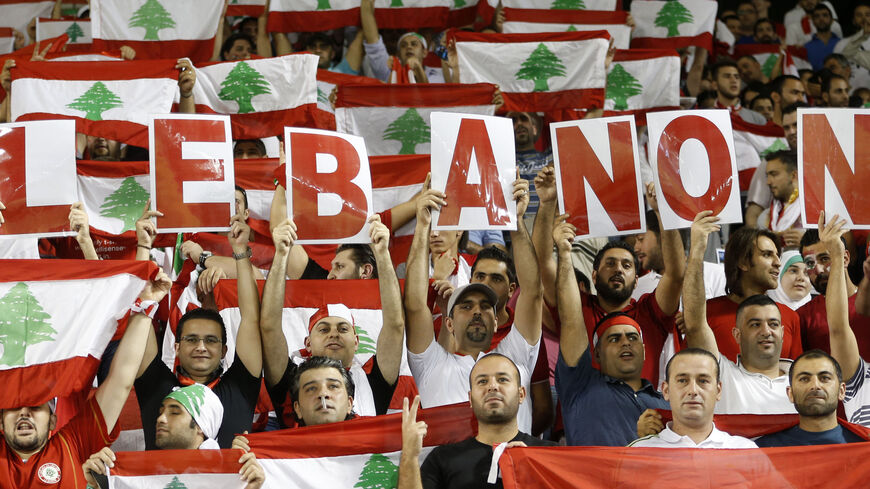 Fans of Lebanon cheer their team during their World Cup qualifying soccer match against Qatar in Doha, Nov. 14, 2012. Qatar won that game, 1-0, and a Qatari company's rights to broadcast the World Cup in Lebanon are now causing many Lebanese soccer fans more grief. - REUTERS/Fadi Al-Assaad

Another crisis has been added to the many Lebanese crises. However, this time it is about the fact that a large segment of the Lebanese people will not be able to watch the World Cup soccer matches. The story began a few weeks ago, when it became clear that the Qatari company Sama had been granted the exclusive rights to broadcast the World Cup games in the Middle East, through the beIN Sports TV channel, previously known as Al-Jazeera Sports. So far, everything seemed normal. Nevertheless, things do not remain simple in Lebanon, where there is a widespread phenomenon called satellite piracy, run by cable distributors in various Lebanese neighborhoods.

These are groups of people who work outside the framework of any law or formal regulation. They pick up the transmission of satellite channels and wire them to homes, in exchange for the small amount of about $10 per month for every subscriber. It should be noted in this context that some broadcasting rights owners have previously demanded that the Lebanese authorities take measures and put an end to this piracy, but to no avail.

However, the right to broadcast the World Cup matches is another story, as the amount of money that has been paid for this right is fairly considerable. The owners of these broadcasting rights would not have allowed Lebanese cable distributors to benefit from this opportunity, especially since figures show that more than half a million Lebanese subscribers, whether households, shops or workplaces, are provided with pirated services.

Therefore, on May 21, Sama was quick to announce it had the exclusive rights to broadcasting the games, and that it would encrypt broadcasting and impose a fee of $200 for households and a larger fee for shops and restaurants in return for a special card from the company that would allow the broadcast of the soccer matches.

The news came as a surprise, as Lebanese are not used to things being subject to such control. They have always bet that someone will be able to crack any code or evade any legal or technical restrictions. Thus, a large segment of them did not consider that the Qatari company would actually be able to have exclusive rights to the World Cup games, until they later found that Sama had provided a limited number of broadcasting cards in Lebanon. Thus, this highly demanded service was put on the black market, where the price of one card in certain areas climbed to $500.

On the other hand, some official authorities noticed that the matter is somehow peculiar: If all legal cable subscribers agreed to buy the card, watching the World Cup would cost the country $10 million. At that point, the Lebanese Ministry of Information contacted the Qatari officials, requesting them to grant Lebanon TV exclusive rights to broadcast the soccer games through its television channel. Many Lebanese officials pinned hopes on a positive Qatari response to their request, yet on June 12, the matches began with no answer from Doha.

Hence, for the past few days, the Lebanese have been oblivious to the fact that they have been without a president since May 25 and that their government has reached a stalemate in the absence of a president. They also forgot about their demand for higher wages for public service workers. They overlooked all their security concerns and focused on one single cause: How to watch World Cup games? And since everything in Lebanon is politicized, a minister confirmed to Al-Monitor that this issue was raised in the last meeting of the council of ministers.

The minister surprised his colleagues by bringing up the issue of the World Cup. However, this matter has been put forth within a sectarian framework, as the minister confirmed that he had received information saying that cable distributors in Lebanese Shiite areas have managed to crack the code on the Qatari television channels, with the help of technicians affiliated with Hezbollah.

The minister demanded that all Lebanese be given equal chances to watch the games, either by helping everyone to crack the code or ban the broadcasting of the games (via cracked codes) in "Hezbollah's areas."

Al-Monitor obtained confirmed information that this request was met with a smile by the rest of the ministers, who disregarded the issue, as they are already at odds on how to manage their affairs, which is the main cause of the government's disruption.

However, sources within the Ministry of Interior confirmed to Al-Monitor that issue of the World Cup was on the agenda of Interior Minister Nohad al-Mashnouk, who was on a visit to Doha a few days ago. Among the military, political, security and economic issues put on the table in Qatar was the issue of the World Cup in Lebanon; the Lebanese interior minister personally requested that the emir of Qatar grant Lebanon the right to watch the games as a free gift. So far, there is no answer.

Watching the World Cup has become limited to those who are financially capable of buying this golden card and to the people who can afford to go to restaurants and cafes to watch it. Meanwhile, a new phenomenon has recently emerged in Lebanese towns and villages, as people are setting up large screens in squares after sharing the price of the card.

For the next 30 days, the Lebanese will overlook some fateful issues such as who will be the next president, will the Islamic State of Iraq and al-Sham (ISIS) reach Lebanon or will the official school exams be held — as they shift their focus to the one and only question: How will we watch the World Cup?