Thousands of Dubai restaurants and hotels are hosting the thousands of World Cup soccer fans who are using the emirate as a base. 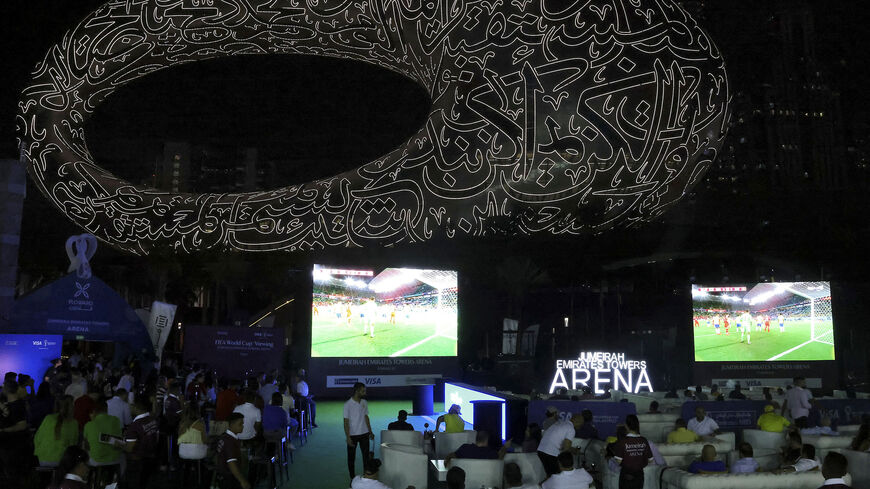 Soccer fans watch a live broadcast of the Qatar 2022 World Cup soccer match between Brazil and Switzerland, near the museum of the Future in Dubai, United Arab Emirates, Nov. 28, 2022. - Karim Sahib/AFP via Getty Images

DUBAI, United Arab Emirates — During the FIFA World Cup in Qatar, cafes, restaurants, hotels and furnished apartments in Dubai are hosting an anticipated 1 million soccer fans who chose the emirate and other cities in the United Arab Emirates (UAE) as a destination to watch the matches.

In early November, Dubai's General Directorate of Residency and Foreigners Affairs had announced the issuance of a 90-day multiple-entry tourist visa allowing soccer fans to enter and leave the UAE as they head to Doha to watch the matches live, using more than 54 daily shuttle flights scheduled from Dubai to Doha during the tournament. As Qatar is a relatively small country to host all of the World Cup fans, the UAE saw this as an opportunity.

These measures will contribute to boosting the tourism sector in Dubai, while residents and visitors in the Emirates suffer the high prices of hotels and rental apartments. Many owners of furnished apartments increased their prices ahead of the event, namely in Dubai Marina, Jumeirah Beach Residence, Jumeirah Lake Towers and downtown Dubai.

Fadi Khozam, a Syrian resident living in the Dubai Marina area, told Al-Monitor that he rents a room in a shared apartment for which he paid 2,500 dirhams per month ($700) up until October. Then the owner of the building raised the monthly rent to 3,500 dirhams (about $950) per room, he said.

“I could not find any alternative. All the rooms are very expensive. The prices of unfurnished studios have increased due to the high demand even in remote areas such as Sport City and Motor City. I need to remain in Dubai Marina because it is close to my job in Media City,” he added.

Khozam is only one of many foreign residents who now pay a higher monthly rent.

Foreign residents constitute about 90% of the population of 9.2 million in the UAE.

Nawal Naji, a Tunisian who works for a bank in Dubai, told Al-Monitor that she wanted to travel to Qatar to attend the World Cup, especially since her country is participating in the tournament. But the least expensive plane ticket from the Emirates to Doha is 5,000 dirhams ($1,500), in addition to entry tickets and accommodation. Meanwhile, hotels in Doha are fully booked.

She said that she prefers to go to cafes or fan zones designated by the Dubai municipality to watch the matches on giant screens.

Khaled Azgoud, a young Moroccan who works in a hospital in Dubai, agreed with Naji.

Morocco is also participating in the tournament, but Azgoud's financial situation, in addition to the inability to take a long vacation, are reasons that force him, like many others, to watch the matches inside the fan zones in Dubai for an entry fee of 70 dirhams ($20).

Hotels in Dubai have been fully booked since late September despite an increase in prices.

She added, “There are no available rooms at our hotel or in any other hotel. Many people are looking to book a small room, but they are unavailable. This situation is expected to continue until after New Year’s Eve.”

Also, a number of restaurants and cafes in Dubai took advantage of the World Cup to raise their prices and impose a minimum charge of 100 dirhams ($25).

Hasan Ayach, manager of the Lebanese Kahloun Restaurant and Cafe in Jumeirah Park, said that the restaurant was forced to impose a minimum charge, because the package proposed by beIN Sports, the Qatari-owned sports channel and official broadcaster of the World Cup in the Middle East and North Africa, for commercial buildings, cafes and restaurants include a fee of 11,000 dirhams ($3,000) per screen to show the matches.

“We are not exploiting customers, but we had to raise our prices to make profits,” he told Al-Monitor.

Nayel Osman, owner of the Syrian Al-Shorfa restaurant in the Jumeirah Beach Residence area, told Al-Monitor, “ We set a minimum charge of 75 dirhams [$20]. We paid 44,000 dirhams [$12,000] [to beIN Sports] for four screens. We are not taking advantage [of the event], but we want to compensate for our losses since the outbreak of the coronavirus pandemic, which affected tourism.”

He added, “Also, some people come in and only order a cup of tea for 20 dirhams [$5.45] and stay for hours, while there are fans who come to watch the matches and order a hookah and food. So imposing an entrance fee is beneficial for us.”

For those who prefer to watch the matches over a quick drink or meal, the Dubai municipality has allocated fan zones in several areas across the emirate, with some serving alcohol such as in the Dubai Marina and Jumeirah Beach Residence areas and in hotels.

Elido Paul, a Filipino national and supervisor of a fan zone in Media City, told Al-Monitor that the entrance fee is 60 dirhams ($16.30) for adults and 30 dirhams ($8.17) for those under 12, and they pay for what they order, which he said is a fair price.