The Iranian state broadcaster has found itself in a new dispute over broadcasting soccer games without permission, this time with Qatar’s beIN Sports and the UEFA. 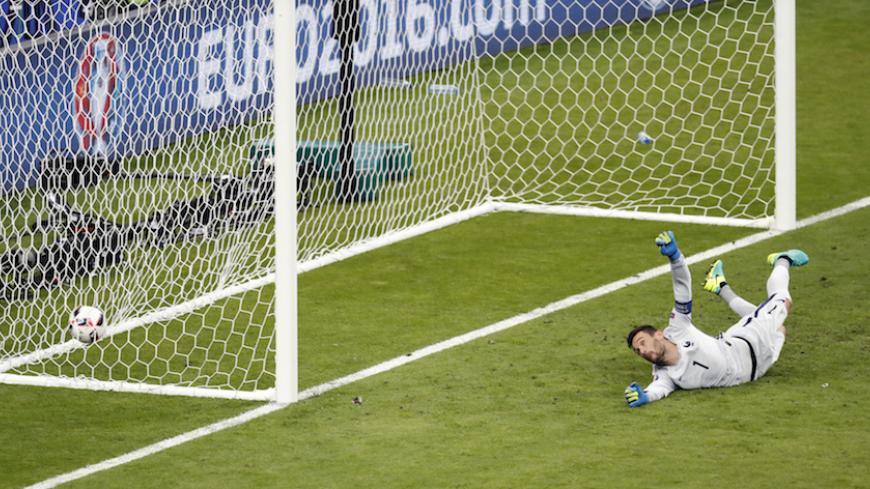 France's goalkeeper Hugo Lloris fails to save a goal by Portugal's Eder in the Euro 2016 championship game in Paris, July 7, 2016. - REUTERS/Charles Platiau

Shortly after the beginning of the European Soccer Championships in France last month, beIN Sports — the subsidiary of Qatar’s Al Jazeera network holding exclusive broadcasting rights for the tournament — announced that it would file a complaint against Islamic Republic of Iran Broadcasting (IRIB) and a number of other broadcasters for illegally airing games. Additionally, the Union of European Football Associations (UEFA) stressed that TV networks that violated broadcasting rules would face fines.

Following these announcements, IRIB’s satellite broadcasts of Euro 2016 games were suspended, with the Iranian state broadcaster only airing the tournament via terrestrial transmission.

Soccer is a popular sport in Iran. The derbies of the country’s domestic football league regularly attract 100,000 spectators to Tehran’s Azadi stadium, while millions more watch games at home. Iranian soccer fans have enjoyed free access to domestic and foreign games for years through the state-run IRIB, which has been repeatedly embroiled in disputes with both local teams and the Soccer Federation of Iran. With beIN Sports’ complaint, it seems that the IRIB’s disputes over broadcasting rights have gone international.

Aalei’s first memory of watching a live game on Iranian television dates back to the 1990 World Cup. “I remember that Iranian television used to broadcast the games with a delay, and since our family lived in the north of the country — on the border with the then-Soviet Union — we could also watch the games without censorship on the television channels of neighboring countries.”

The IRIB’s first serious challenge in terms of simultaneous broadcasting rights emerged in relation to the 2002 World Cup. Iran had purchased broadcasting rights but found itself facing a complaint from the Japanese broadcaster after only two games, as it was airing games on satellite frequencies popular in neighboring countries.

It appears that the UEFA may have had a hand in the most recent complaint against IRIB. Mehdi Mahmoudi, a legal adviser to the Soccer Federation of Iran, told Al-Monitor that the contracts TV networks seeking to purchase broadcasting rights have to sign stipulate that it is necessary to obtain the written consent of both UEFA and beIN Sports. “In the case of a violation, UEFA has the right to suspend the broadcasting of games to a region and beIN Sports can pursue litigation in local courts,” Mahmoudi told Al-Monitor. “This has happened in the past. In 2014, beIN filed a complaint against the Lebanese government for broadcasting World Cup games without permission.”

Mahmoudi also noted the 1997 dispute between Iran’s Persepolis and Qatar’s Al-Sadd Soccer Club over the transfer of prominent Iranian player Ali Daei to a European team. That incident was ultimately resolved through the mediation of the then Iranian president at a conference of the Organization for Islamic Cooperation. As such, Mahmoudi said, “Because of Iran’s good relations with Qatar, it does not appear that the Qataris are inclined to take action in practice.”

While Iran has made strides on the privatization of major state-owned enterprises, including major industrial entities, IRIB has so far managed to protect its monopoly and has not allowed the private sector to enter the broadcasting industry. The law cited as backing this monopoly is Article 44 of the Iranian Constitution, which stipulates that radio and television are at the discretion of the state. The constitutional watchdog, the Guardian Council, has indeed interpreted the establishment of private radio and television networks as running contrary to Article 44. Of further note, Article 175 of the Iranian Constitution stipulates that the IRIB director be directly appointed by the supreme leader. This has made the state broadcaster one of the most sensitive institutions in the Islamic Republic.

Given the absence of domestically based private TV networks in Iran, IRIB’s first efforts to acquire broadcasting rights took place in the 2000s, coinciding with the professionalization of soccer in Iran. The efforts of Mohsen Safaei-Farahani, the head of the Soccer Federation back then, resulted in the ratification of a bill in parliament that required IRIB to hand over broadcasting rights to the Soccer Federation, amid objections from both the state broadcaster and the Guardian Council. The Expediency Council, which is tasked with mediating disputes over legislation, ultimately ruled, “IRIB does not obtain revenue from broadcasting sports competitions, and any payment to the Soccer Federation essentially comes from the government budget.”

Since the Asian Soccer Confederation sets the holding of broadcasting rights as a necessary condition to partake in the Asian Champions League, the Iranian Soccer Federation has intensified its efforts in this regard. In 2014, the Soccer Federation blocked the entrance of IRIB cameras in the middle of an Iranian Premier League game between Persepolis and Saipa Soccer Club, and maintained the ban in all stadiums for two weeks. The dispute was only resolved with the intervention of the Ministry of Youth Affairs and Sports and the payment of a small settlement.

A key line of reasoning for IRIB in this dispute is that payment for the right to air Iranian Premier League games must come from the government budget. In the view of Aalei, the sports journalist, this is where the key obstacle lies. He said, “It is this very ‘governmental view’ that does not recognize official broadcasting rights. IRIB receives considerable revenue from the broadcasting of television commercials during soccer games. Yet the small amount that it has given to the Soccer Federation in recent years has been labeled as government assistance.”