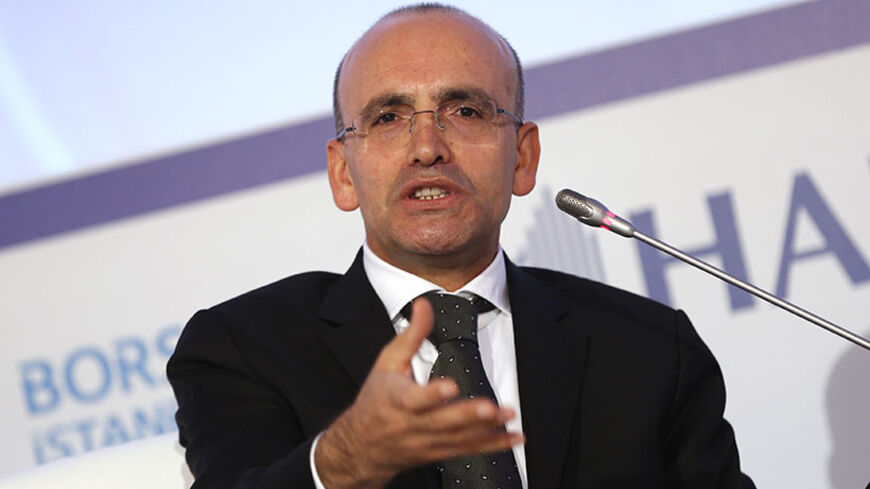 Turkish Finance Minister Mehmet Simsek's visit to Beirut on June 11 was not met with considerable media hype. Its content and symbolism, however, carry various signs and messages, especially since it follows a series of crises, both in Turkey and in the neighboring Levant.

It should be noted that the last time there was an official Turkish presence in Lebanon was in October 2013, on the occasion of the release of the two Turkish pilots who were kidnapped in Lebanon. That was a security visit par excellence, as it managed to steal the spotlight given the importance of the release itself, and because it came against the backdrop of sharp political divisions in Lebanon about Turkey's position on the Arab revolutions and the ongoing war in Syria specifically.

This time, however, the Turkish visit was economic par excellence. It went beyond the current regional crises with its security and political repercussions. It also went beyond many questions about the Turkish role and fell within a long-term developmental and strategic framework. Simsek met with Lebanese Prime Minister Tammam Salam and a number of political officials without issuing any statements. He wanted this visit to be limited to his participation as a main guest lecturer in a conference held on June 12 by the World Bank under the title, "Over the horizon: A new Levant."

The title is remarkable in itself. It recalls the pre-Arab revolutions period, especially the 2002-2009 period of the Turkish rise in the Middle East, the period of the arrival of the Justice and Development Party (AKP) to power and the rise of Recep Tayyip Erdogan along with the accompanying restructuring of Turkish foreign policy.

The most important headlines of that period were development and economic integration in the “strategic depth" of Turkey, as expressed by Foreign Minister Ahmet Davutoglu and per the rumors about the zero conflict policy with neighboring countries.

In this context, Turkey was the first to recirculate the term “Levant” that existed during the period of the Ottoman Empire. Erdogan's government paired the talk with the walk and led an intensive diplomatic effort with Jordan, Lebanon and Syria during this period, thus leading to the signing of partnership and cooperation agreements — chief among them was the abolition of these countries’ need for visas to enter and exit Turkey. This is a remarkable measure as it is unparalleled among the Arab states themselves, despite their decades-long call for economic integration and joint Arab fate, knowing that a large number of agreements are signed but are yet to be applied.

It is no longer a secret that the Levant project, or the entire theory of the “strategic depth" that is based on political cooperation and economic integration with neighboring countries, was the first victim of the Arab Spring, which was a mercy killing by the Syrian war and Turkey’s engagement in the support of rebels in the face of the regime. This option has first raised the ire of the regime and its supporters, and subsequently caused disappointment for its opponents as Turkey turned out to be unable to implement its policies and actively support the Syrian opposition.

But beyond the issue of the capabilities that are subject to the balance of powers, the Arab revolutions revealed another fact, which is the bet of the AKP government on the Muslim Brotherhood both in Syria and Egypt. This is the core of the matter.

During a meeting on the sidelines of the conference, Al-Monitor asked the minister, an economist who came to Beirut to defend and break the news of the promising economic development and integration between the countries of the Levant, why Turkey changed its foreign strategy and moved from betting on economic integration and engagement to betting on the Brotherhood and Islamic affiliation. The minister, who felt that the question showed suspicions about the AKP’s intentions, said that the volume of bilateral trade has doubled since the arrival of the party to power, and that this is the best evidence of Turkey's openness to the world and a signal that does not leave room for uncertainty about the real intentions of his party.

Concerning Egypt, after Simsek admitted that the ousted Egyptian President Mohammed Morsi had committed some errors — such as monopoly in governance and the drafting of the constitution — he said that a democratically elected president was toppled. More importantly, he recalled Erdogan’s positions during his visit to Egypt, his defense of secularism and his call to establish a civil state, evidence of the existence of a fundamental difference with the Muslim Brotherhood in Egypt.

As for the disappointment felt by the Arabs calling for more active support to the Syrian opposition — and these are not a minority — Simsek told Al-Monitor, “Have other pro-opposition countries such as France or the United States done more?” Simsek preferred not to talk further about politics; Turkey will be busy with many domestic and political milestones in the coming months.

Simsek mainly focused on development issues and on his country’s economic vision toward the Levant. He offered facts and figures about the future challenges and the plans of his government in the field of education, the building of infrastructure and the development of alternative energies.

Simsek also elaborated on the Turkish economic model and recalled what distinguished Turkey during the pre-Arab Spring period. Will his visit mark Turkey’s return to its previous positioning or the beginning of a Turkish repositioning, one that leads to a rapprochement with Abdel Fattah al-Sisi for various reasons that include the fact that Egypt constitutes the cornerstone of the Levantine project? Or will it lead to launching mediation between the Arabs and Iran to alleviate the conflict in the region? Turkey is probably the only regional country capable of doing so.