The lost promise of Turkey-Egypt relations

Though Turkish-Egyptian relations have sunk to new lows with the reciprocal removal of ambassadors, ties between the two countries once promised economic and strategic development. 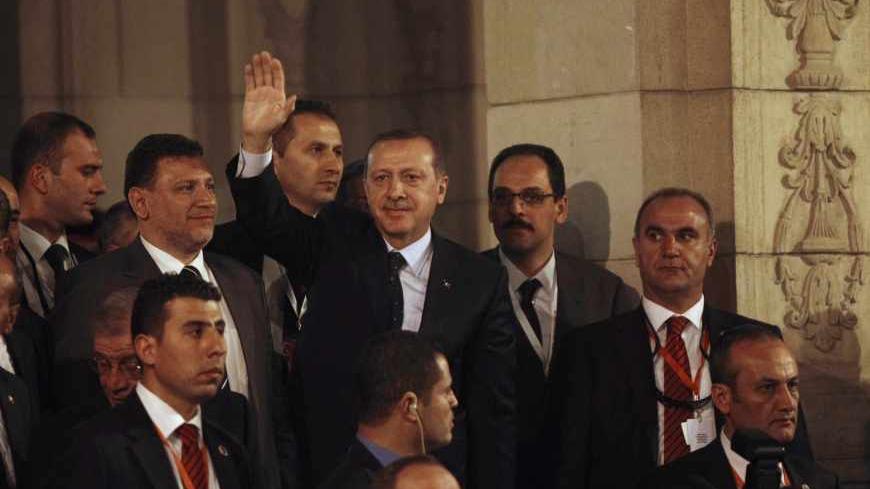 Turkish Prime Minister Recep Tayyip Erdogan waves to students after his speech at Cairo University on the first day of his two-day trip to Egypt, Nov. 17, 2012. - REUTERS/Asmaa Waguih

On Nov. 23, Egypt's Foreign Ministry ordered the Turkish ambassador to Cairo to leave the country and decided to lower the country's diplomatic representation. Meanwhile, the Egyptian ambassador to Turkey has already returned to Cairo. A statement issued by the Egyptian Foreign Ministry said the move was “because of Turkey's continued 'interference' in Egyptian internal affairs.”

Since the removal of Egyptian President Mohammed Morsi, Egyptian media have been bitterly critical of Turkey’s international lobbying against Egypt and have cited Muslim Brotherhood meetings with hostile agendas in Turkey to undermine the interim government. Is history repeating itself? After the Egyptian 1952 revolution — or Free Officers-led coup d’etat — the revolutionary government did the same thing. In reaction to the decision, Turkish President Abdullah Gul told reporters that he hoped our relations "will be restored soon," perhaps giving a small hint of disagreement with Turkish Prime Minister Recep Tayyip Erdogan.

How did we get here? Only a year or so ago, there seemed to be so much promise in the Egyptian-Turkish relationship. Many Egyptians and Arabs admired Erdogan and hoped that enhanced cooperation between Egypt and Turkey could lead to regional development and improved security and stability. Even liberals watched with admiration Turkey’s steady economic growth and felt comfortable with what they thought to be Erdogan’s “moderate” Islamic values. With Turkey’s disillusion in joining the European Union, it seemed only logical that Turkey should turn its attention to its old friends in the Middle East.

The Justice and Development Party (AKP) government in Turkey has charted a foreign policy course that drastically differs from its predecessors on two counts. First, Turkish Foreign Minister Ahmet Davutoglu declared that the main pillar of his foreign policy doctrine was to have zero problems with Turkey’s neighbors. Turkey would refrain from initiating conflict with its neighbors and would actively engage with them to solve existing problems. Second, Davutoglu has long argued that the region that spans from the Balkans to the Middle East has extensive historical, cultural and geographical linkages which necessitate regional cooperation. Such regional cooperation would not only facilitate much-needed economic growth but would also provide regional solutions to long-standing regional problems such as the Israeli-Palestinian conflict, Iranian nuclear armament and chronic authoritarianism.

Long before he became foreign minister, Davutoglu articulated this vision as “strategic depth” in his academic work. He frequently stated that he wished to see regional cooperation that would enable people to travel from Bosnia to Sudan without a passport. While traditional Turkish diplomacy has always maintained its distance from the Middle East, orienting itself instead toward Europe and the West, the Islamic orientation of the AKP government allowed the government to be more comfortable in developing ties within the Middle East and establishing political networks in pivotal countries such as Egypt, Syria, Israel and Tunisia. The relationship with Egypt — a cultural hub for the Arab and Islamic worlds — was particularly important, as the combined political and economic clout of Turkey, with its connections to Europe and the West, would undoubtedly generate important synergies to create leaderships that could turn Davutoglu’s much cherished regional cooperation into reality. The combination could create sufficient “gravity” and provide leadership to attract countries of the region to subscribe to this vision of regional cooperation.

In 2011, a few months after the revolution, Erdogan was treated like a “rock star” during his visit to Egypt. There were some mixed signs. Liberals joyously noted that he openly advised the Muslim Brotherhood to adopt a secular form of government and constitution, something the Brotherhood was quick to denounce as unacceptable intervention. Yet, Erdogan mainly met with Islamists, in particular the Brotherhood, which was seen as alarming to other political factions. Still, many liberals thought that Erdogan could be the man who would take the Muslim Brotherhood to their moderate future.

As the Arab Spring spread from Tunisia to other Arab countries, and autocratic regimes started to collapse, many saw the Turkish experience under the AKP government as a possible model for Islamist parties with popular support. Coming from an Islamic background but seemingly accepting the secular framework, the AKP government proved that Islamic parties become players in a parliamentary system and can effectively govern. However, as the Arab Spring disrupted long-established social and political forces in the Middle East, the AKP’s foreign policy lost its pragmatic orientation, becoming increasingly ideological, rendering Turkey much less influential in the region.

While acting on a correct impulse, the AKP government quickly condemned the Syrian government’s brutal repression of protests and demanded regime change. As the protests quickly turned into a protracted civil war, the AKP government adopted a hard-line approach against the Assad government and closed all doors to all policy options besides regime change. Turkey’s alliance with Saudi Arabia, Qatar and Kuwait on Syria gave the impression that the real impetus was the desire by the Sunni alliance to block the growing influence of Shiite Iran in Iraq, Syria and Lebanon.

In May 2013, popular protests broke out against the AKP government in Istanbul and other cities. While resistance to an urban project proposed by the AKP government initiated the protests, the real trigger was the growing discomfort with Erdogan's increasingly autocratic rule. The AKP government used excessive force to repress protests, and while this was a domestic matter, the heavy-handed approach greatly damaged the democratic credentials of the AKP.

Finally, the AKP chose to side with the Muslim Brotherhood when the army intervened to end the Morsi presidency. The AKP justified its strong reaction to the military intervention by emphasizing that military intervention against a democratically elected government is an unacceptable violation of democratic rule. Unfortunately, the AKP and Erdogan chose to ignore the massive protests against Morsi’s rule and the Brotherhood’s consistent pattern of violating the democratic process. This one-sided approach not only decreased the legitimacy of the AKP government in the eyes of millions of Egyptians who wanted to end the Brotherhood’s rule but it also eliminated any influence the AKP might have had during the transition period. Instead of Erdogan taking the Brotherhood to a progressive future vision, the old organization seemed to drag him and the AKP to its conservative past.

As a result, for months now, Turkey has no longer held any meaningful diplomatic relationship with Egypt even before Egyptian expulsion of the Turkish ambassador. The once promising relationship between these two important regional powers has come to an abrupt and premature end.

What lies in the future?

AKP’s initial vision of regional cooperation, based on historical, cultural and geographical ties, was seriously undermined by the ideological turn the AKP took after the eruption of Arab Spring. The idea of regional cooperation still holds great potential for the long-term prosperity and stability of the region. Middle Eastern countries have long been complaining about the meddling of world powers in their domestic affairs, and this is a justified grievance.

The struggle for resources and the Israeli-Palestinian conflict have enabled external players to poke their noses in the domestic affairs of countries in the region. It is unrealistic to expect that the United States, Europe or Russia will stop playing a role in the Middle East. However, countries in the region must take control of their own affairs and build their leverage, possibly through regional cooperation as Latin American countries have done in recent years.

However, such regional cooperation will have to develop beyond ethnic, religious and sectarian belongings to account for the tremendous diversity of the region. Unless such a moment arrives fairly soon, authoritarianism, interstate conflict and self-destruction will continue to hamper development efforts and plague the already suffering people of the Middle East with yet more pains.