The Turkish 'Model' For Authoritarianism in Egypt

Both Turkey and Egypt may be models for a new authoritarianism and more confrontational societies, writes Cengiz Candar. 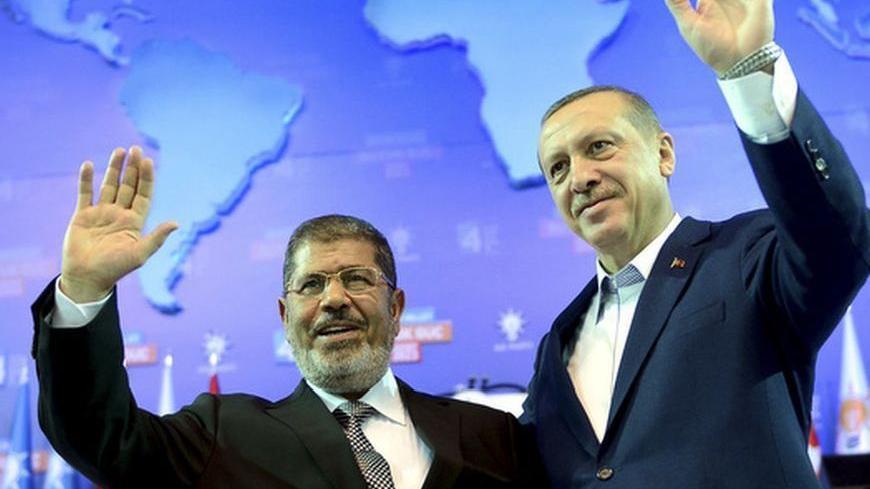 For about two years, the Arab Revolution was truly an "Arab Spring," an appropriate label for historical developments that began in Tunisia and led to the relatively bloodless toppling of a long-term authoritarian regime in Egypt.

Tunisia and Egypt grew as blossoms of democracy in the Middle East by liberating themselves from autocratic regimes with relatively non-violent protests. The initial consequence of the Arab Spring was the Tunisian version of the Muslim Brotherhood, an-Nahda, and the Egyptian Muslim Brotherhood’s Freedom and Justice Party winning the elections.

From those days onward, Turkey’s Justice and Development Party (AKP) government assumed a new strategic role with the stamp of approval of the Western world. Until the Arab Spring, the main Western debate was whether Turkey was undergoing an axis shift. The sight of Turkey resembling a ship that had lost its anchor in the Western world and was drifting toward the Arab-Islam world generated heated debates in the West, especially in US circles where the Israeli lobby is most influential.

First Tunisia and Egypt, then Libya and Syria removed the AKP government from being the subject of arguments about an axis shift to being a regional power as a role model, or at least, a source of emulation.

Suddenly Turkey went from being watched warily for its perceived axis shift toward the Middle East to being praised as a country under an Islamic government, one that was an example for Arab countries of the region and a motivator for their shift to the West.

The changes in the region became a source of inspiration for Foreign Minister Ahmet Davutoglu, the senior architect of Turkey’s Middle East policy. This is when Davutoglu began to plan a Turkey-Egypt strategic axis.

With the policy of “’zero problems with neighbors,” for which the copyright belongs to Davutoglu, proving unworkable, the emergence of a Turkey-Egypt strategic axis could well be an exciting geostrategic goal that would make up for the loss of that policy.

The Turkey-Egypt axis represents a vision that could not be realized until now. If successful, it is a vision that would affect the entire international system.

The Egypt of the Pharaohs and the Asia Minor of the Hittites were the first two rivals of geopolitical regions of ancient history. Even after Egypt’s annexation by the Ottoman Empire in 1517, the marriage between the two centers was never truly consummated. The governor of Egypt Mehmet Ali Pasha, who was dispatched to quell the Wahabi uprising in the Arabian Peninsula, found a place for himself in history as the father of modernization of Egypt. He achieved autonomy for Cairo vis-à-vis Istanbul in the first quarter of the 19th century.

Therefore, a Turkey-Egypt axis, if realized in the first half of the 21st century, would certainly be one of the most ambitious strategic axes of history.

Prime Minister Erdogan’s AKP election campaign team went to Egypt to assist in the Muslim Brotherhood’s Freedom and Justice Party’s election campaign and contributed especially in the presidential election. After Khairat al-Shater, seen by Erdogan as a replica of the Muslim Brotherhood, was vetoed out of the presidential race, AKP focused its support on Muhammad Morsi.

Muhammad Morsi’s being the only president attending AKP’s National Congress on Sept. 30 and the speech he made there were significant markers that illustrated the point that Turkey-Egypt, or AKP-Muslim Brotherhood, relations have reached.

It is interesting to note the coincidence of timings of allegations made against Morsi, accusing him of shifting to an authoritarian regime, or in other words to “Mubarak regime without Mubarak,” and charges accusing Erdogan of having ambitions for a one-man rule.

While in the midst of efforts to create a geostrategic axis, that is how we ended up discussing whether they are actually setting bad examples for each other.

Prime Minister Erdogan’s praise of secularism while visiting Cairo a year ago had drawn criticism form the Egyptian Muslim Brotherhood and Salafist quarters. If Turkey couldn’t be a source of inspiration for secularism, or an example to be emulated for Egypt, Muhammad Morsi and the Muslim Brotherhood certainly would not object to the slide of Erdogan’s rule to authoritarianism.

Renowned expert on Islam Olivier Roy, in his New Statesman article “The Myth of the Islamic Winter," says this about the Muslim Brothers: ““In order to have their hands free domestically, the Islamists must make themselves indispensable to the West — which explains the mediating role that Egypt played in the recent crisis in Gaza. Morsi has performed brilliantly on the international stage, gaining the approval of the Americans in the process... Morsi’s success on the international stage has encouraged him to flex his muscles at home... But Morsi has gone too far too fast in his attempt to reinforce the power of the presidency”

Roy then says the future might not be all that bright for Morsi: “Time is against Morsi, because the economic measures that he wants to introduce will make the government increasingly unpopular. And, on the other hand, continued political protest will require him to call on the army, which will support him but at a price — the political and economic autonomy that the military is asking for runs counter to the Brotherhood’s programme of economic liberalisation. In short, the new regime is politically isolated.”

Although Erdogan and AKP’s outlook have many similarities to Morsi and the Muslim Brotherhood, there are also many differences between them.

For one thing, Erdogan and his party have a record of governance of 10 years with many successes to their names. Also while the Turkish economy is doing well and there seem to be no economic problems in sight for Erdogan, Morsi has a wide slate of economic problems that could make it difficult for him.

Olivier Roy recommended to Morsi to overcome economic problems of his government by alluding to the Turkish example: ““To get through the period of austerity and the economic difficulties that go with it, they should have done more to secure a ‘historic compromise’ with the liberals... In this respect, the model is the Justice and Development Party (AKP) in Turkey, which has learned to work with existing institutions and civil society. This has allowed it to reconcile a strong state with a liberal economy, a conservative Islamic party with an open society.”

This is exactly where Olivier Roy and many other observers of Turkey have to update their understanding of Turkey’s negative vibes. While in Egypt the Muslim Brotherhood is advised to make more efforts for historic reconciliation with the liberals, in Turkey Erdogan has basically terminated the historic reconciliation already achieved in Turkey and that has played a major role in the AKP’s success.

We are also seeing Erdogan complaining more and more about the existing institutions and civil society. All these are signals that Turkey is moving from a structure of open society toward a prohibitive and confrontational society.

Erdogan is promoting a presidential system equipped with stronger powers and asking for needed constitutional amendments because he believes that the separation of powers — the key pillar of democracy — is impeding the work of the executive branch.

His persistence is feeding charges that he wants to be a one-man ruler or a new Ottoman Sultan and that the Turkish regime is sliding toward authoritarianism.

In 2013, Turkey will enter a new election cycle. If police power will be used as it is done today when there will be more people protesting in the streets that will be reaffirmation of this authoritarianism tendency. Then Turkey won’t be a good example for Egypt just as Egypt is not good example for Turkey today.

Here comes the real question: Do tendencies of authoritarianism in Turkey and Egypt worry Washington?

The answer to this question will help to better predict the near future of the region.