The Turkish lira took a tumble amid reports that Mehmet Simsek, the deputy prime minister in charge of Turkey's economy, had resigned. 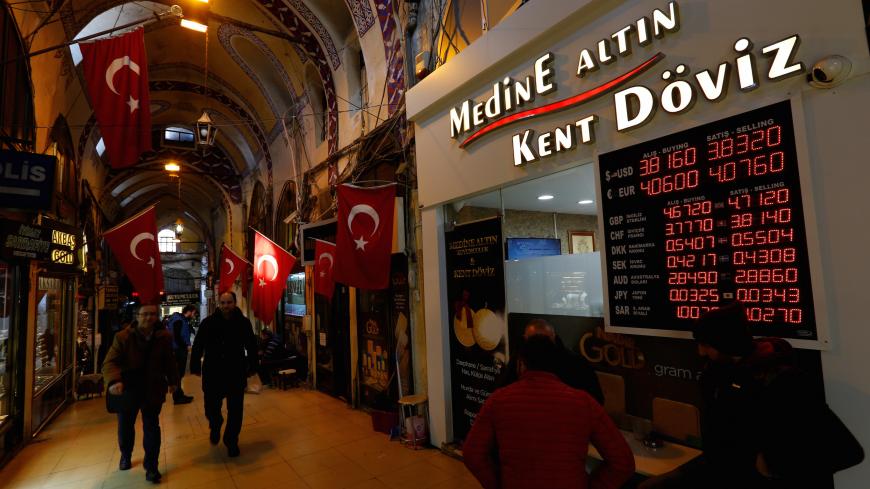 Merchants chat in front of a currency exchange office at the historical Grand Bazaar in Istanbul, Turkey, Jan. 12, 2017. - REUTERS/Murad Sezer

There’s never a dull moment in President Recep Tayyip Erdogan’s “new Turkey,” and today was no exception. Claims that Mehmet Simsek, the deputy prime minister in charge of the economy, had resigned sent the Turkish lira tumbling to record lows against the dollar and tremors through the political establishment. It didn’t help that presidential spokesman Ibrahim Kalin was unable to offer clarity when queried about Simsek’s status. “This is, for now, an allegation. There is nothing that came to us about this,” he said in a press briefing. Hours later Simsek took to Twitter to confirm he was still on the job — at an investor’s meeting in Istanbul — and that he would continue to serve “until our last breath.”

The tweet followed claims in the Turkish media that Simsek had offered his resignation to Prime Minister Binali Yildirim. A source close to Yilidirim told Al-Monitor on condition of strict anonymity that the reports were true but that Simsek had been persuaded to stay on "for the good of the country and for the good of the cause.” The source explained that by “cause” he was referring to Turkey’s Islamist movement. “In conservative circles if one is perceived to have betrayed the cause one is labeled a traitor for good.” The source added, “There are many people who feel, like Simsek, that things have gone too far but stay out of a mix of loyalty and fear.” The source’s claims regarding Simsek’s abortive resignation could not be independently confirmed.

Yildirim also declared that Simsek had not resigned, saying, "Our friend Mehmet Simsek is at the helm of his duties."

Speculation has been rife for some time that the British-trained economist who has been in the Cabinet since 2007 will step down. Simsek, more technocrat than politician, is seen as one of the few reform-minded voices left in the Turkish government. An ethnic Kurd who had enthusiastically embraced Erdogan’s now shelved overtures to the Kurds, he is known to oppose the president’s unorthodox views on the economy. In private meetings with investors he emphasizes the need to pursue European Union-inspired changes and return to the rule of law that has steadily faded under the emergency rule slapped on in the wake of the failed 2016 coup.

Asli Aydintasbas, a senior policy fellow for the European Council on Foreign Relations, told Al-Monitor, “Simsek’s continued presence is deemed vital for investor confidence. His departure would be a big blow and the government understands that.”

Erdogan’s biggest bugbear since coming to power in 2002 has been interest rates, and in recent months he has resumed pressure on the Central Bank to keep them as low as possible, claiming this alone can tame inflation and fuel growth. At a March 31 meeting of his ruling Justice and Development Party (AKP), Erdogan said, “We are going to rescue Turkey from this interest curse by bringing rates down. The mother and father of inflation are interest rates. Those who try to do the opposite will have to contend with me.”

Simsek reportedly felt targeted on March 30, when Erdogan complained about various party members who spoke negatively about the Turkish economy. "If they commit such errors it is unforgivable," Erdogan said.

Then on April 2, he angrily denounced “those who are working behind my back” at an AKP executive council meeting on April 2. According to the mainstream Hurriyet, Erdogan complained that not only were his calls to lower rates being defied but that the Central Bank had exploited his absence on a foreign tour to raise rates even further. “How can this be? Then they accuse of one-man rule. What sort of one-man rule is this that we make decisions and they do not apply them?” Erdogan reportedly griped during the meeting.

Simsek will have also drawn Erdogan’s ire when he called on the public to not borrow in dollars given its giddy ascent against the Turkish lira in recent weeks.

Aydintasbas observed, “These were some of the most accurate words I heard in a long while. State officials need to speak honestly if the state is to maintain its credibility.” She added, “The government boasts about high growth but the fact is that people are poorer today. The minimum wage was worth $562 in 2013. Today it is worth $400. You need democracy and the rule of law to draw foreign investors and for a healthy economy.”

Erdogan’s obsession with interest rates is thought to be rooted in his Islamic faith, which proscribes usury. Etyen Mahcupyan, a former Erdogan supporter, observed in a column titled “Mistaking Faith for Knowledge,” published today by mildly oppositional, conservative newspaper Karar, “Because Erdogan is a good Muslim, he believes that interest is the mother of all evil and because inflation is a bad thing, he believes the root of it is interest.” Mahcupyan concluded, “When you can’t separate facts from morals and if you seek to overcome this dilemma by seeking refuge in faith, you end up believing you know something without knowing what that something you believe in really is.”