Mothers of kidnapped Israelis get cold shoulder at UN

After speaking at the UN Human Rights Council, the mother of one of the kidnapped Israeli students lamented, "The world is indifferent; it does not heed our cries." 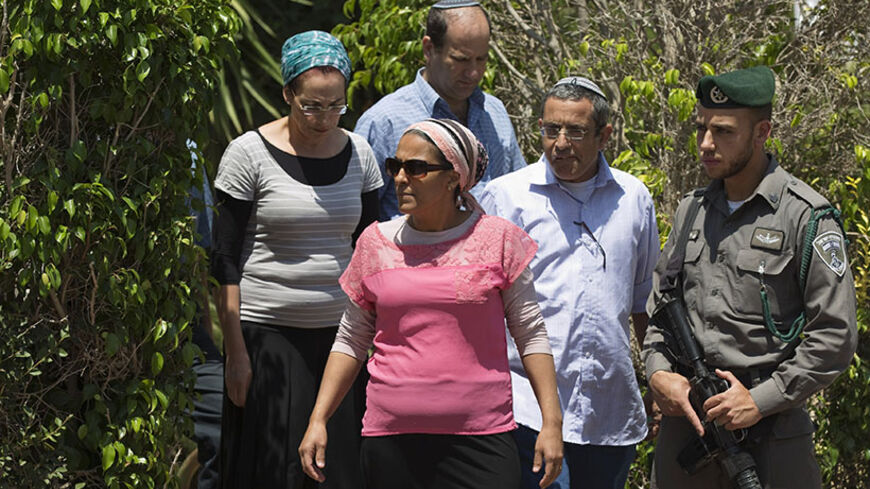 Iris and Uri Yifrah (foreground), Bat-Galim Shaer (back L), and Avi Fraenkel (back R), the parents of the three missing Israeli teens walk outside the Shaer family home in the West Bank Jewish settlement of Talmon, June 23, 2014. - REUTERS/Finbarr O'Reilly

Rachel Frenkel’s two-minute speech before the UN Human Rights Council on June 24 concisely summed up a horrifying personal tragedy. The mother of kidnapped Naftali Frenkel made good use of the short time allotted to her, with the mothers of the two other kidnapped teens — Gilad Shaer’s mother Bat-Galim and Eyal Yifrah’s mother Iris — sitting behind her. The sight of the three women together only intensified the already highly charged moment. But Frenkel’s attempt to evoke sympathy from her audience only served to emphasize the cynical and hostile winds blowing toward them in the hall.

She told them about the boys’ hobbies: “Naftali is 16. He loves to play guitar and basketball. He’s a good student and a good boy — a combination of serious and fun. Eyal loves to play sports and cook. Gilad is an amateur pastry chef and loves movies.”

She spoke of the last text message she received from her son and stressed that the youths were kidnapped on their way home from school. Choking with emotion, she shared the families’ overwhelming desire to have them “back in our homes, in their beds," saying, "We just want to hug them again.” But she failed in her effort to touch the representatives of different countries seated in the Geneva hall, and through them to reach the world public opinion.

“The world is indifferent. It does not heed our cries, and that’s why we came — to make our pleas heard,” said Bat-Galim Shaer in her disappointed summation of the UN assembly's treatment of the three mothers, whose world had been turned upside down 10 days earlier.

On their way back to the airport to catch their return flight to Israel, the three managed to give several interviews to foreign media outlets on the advice of the prime minister’s office. And yet they sensed their inability to crack the wall of international indifference to their tragedy.

The reception accorded the three mothers in Geneva should not have surprised anyone following Israel’s loss of legitimacy in recent years over the settlements. As time goes by, and in the absence of a diplomatic process, Israel is increasingly perceived as the recalcitrant side in its conflict with the Palestinians. It's perceived as an arrogant occupying state that keeps building in the settlements even at the height of negotiations. Israeli public diplomacy is failing more and more in the battle over international public opinion taking place at UN institutions.

The boycott of settlement products is not an insignificant phenomenon, despite the claims of the Israeli right. On the other side, the Palestinians are enjoying a tailwind in Europe and at the UN as the underdog waging a legitimate struggle for its right to form a state.

The UN’s Human Rights Council in Geneva is considered one of most hostile forums to Israel. In 2012, Foreign Minister Avigdor Liberman decided to sever all ties with the council following its decision to investigate Israel’s settlement policy in Judea and Samaria. The investigation report, published in January 2013, claimed Israel was violating Palestinian rights, international law and the Geneva Convention, which bans the transfer of populations to an occupied area. This hostile atmosphere was a tangible backdrop to the three mothers’ visit to Geneva. And to top it all off, Frenkel’s speech was preceded by a debate in which Israel was overwhelmingly and sharply criticized over the situation in the territories and the settlements. A Palestinian human rights activist in the hall was unable to set aside her hostility toward the worried mothers and called out, “Is there room here for 5,000 Palestinian mothers, too?”

A diplomatic source told Al-Monitor that this hostility is unrelated to the fact that as far as the world is concerned, the mothers are settlers. Rather, it has to do with a general sense of disgust with Israel felt throughout the world, and even more so in Europe. “Construction in the settlements has become the entire focus of everything relating to Israel, leaving no room for a sense of solidarity even in a case such as this of kidnapping. That is the face of the conflict, and that’s why even when a personal tragedy is involved, we are unable to arouse sympathy as the wronged side. That is the price of the cumulative loss of legitimacy. We are in a completely different place in the international arena from we were when Gilad Shalit was kidnapped.”

In sharp contrast to the alienated world opinion, in Israel the event is a national tragedy. Knesset members from the political left and right keep visiting the boys’ homes, and on June 30 a rally is scheduled to take place at Rabin Square in Tel Aviv — the site where Prime Minister Yitzhak Rabin was assassinated and one that expresses perhaps more than anything the domestic struggle between those who oppose a division of the land and those who favor the idea. Sadly, this is an internal debate that does not have any impact on the world. The rally will increase pressure on the government to locate the kidnapped youths but will not break through the local barriers and onto the international agenda.

Generally speaking, the internal Israeli public discourse lost any connection to the international discourse concerning the conflict with the Palestinians. There is no real understanding in Israel of the significance of the continued diplomatic stalemate.

Such was the case, too, with the reception accorded the groundbreaking speech delivered June 18 by Palestinian Authority President Mahmoud Abbas at the Arab league conference in Saudi Arabia. Israeli politicians on the right set the tone when they reacted dismissively to his words and the prime minister responded coolly as well.

There’s a clear link between the hostile reception of the three mothers in Geneva and the manner in which Abbas' speech was received in Jerusalem. As long as Israel remains entrenched in its positions and ignores events outside its borders, it will be hard pressed to find sympathy in international institutions even when it deserves it.