It is natural that the kidnapping of three Israeli youths would generate solidarity among the public, but it also raises the question of why peace-loving secular Israelis have let themselves be dragged along for years, from clash to clash, by a nationalistic messianic minority. 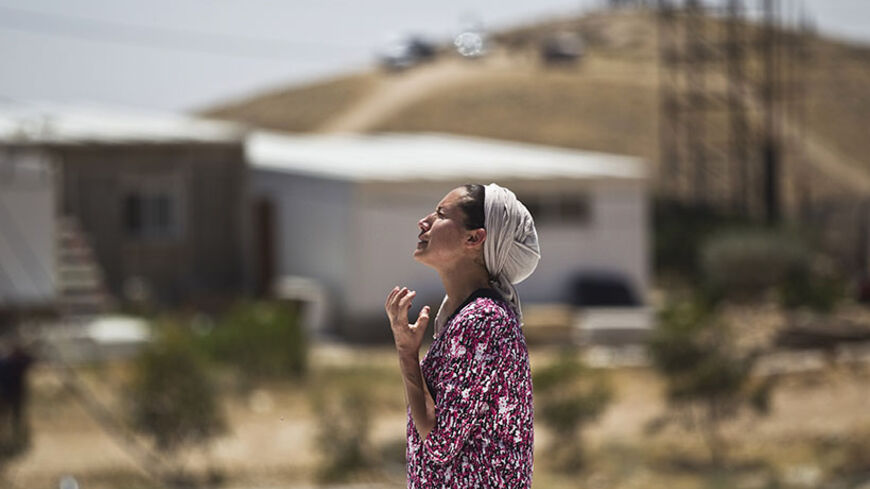 A Jewish settler reacts as she stands atop the roof of a temporary structure in Maale Rehavam, near Bethlehem, May 14, 2014. - REUTERS/Ronen Zvulun

On June 17, I took part in a discussion about settlements at a conference sponsored by the state prosecutor’s office in Modi’in. The event was attended by dozens of prosecutors from all over Israel.

The first speaker was the journalist Israel Harel, a resident of the Ofra settlement and a veteran of the Gush Emunim settlement movement. Harel praised the settlement enterprise and rejected the right of the “Arabs in Judea and Samaria” — the word “Palestinians” never crossed his lips — to an independent state. Harel’s remarks were greeted with exemplary silence. No heckling. Not a single critical comment.

Then it was my turn. I pointed to the damage incurred to Israeli citizens because of the settlement policy. I spoke of the damage caused by the settlements to the Zionist enterprise and warned of their negative influence on Israel’s international standing. I was constantly interrupted by shouting. The message — “How dare you attack the settlers at a time like this” and “Now is the time to stand united.” In short, they were essentially saying that I should be ashamed. To be fair, after my speech two or three prosecutors came up to me and apologized for the behavior of their colleagues.

This episode illustrates the prevailing atmosphere in Israel since the kidnapping of the three young hitchhikers from the Etzion settlement bloc. The one incident has managed to do to the Israeli public in a matter of days what the settlement establishment has been trying unsuccessfully to do for years. The tens of millions of shekels invested by the Yesha settlement council in its “Yesha is here” campaign failed to bring the settlers into every household in Israel, unlike the scenes of the anxious parents and friends praying for the safe return of the missing youths.

In an article Harel published in September 2004 in the settler newsletter Nekuda, he complained that disengagement from the Katif bloc settlements in Gaza reflected alienation between the “whole of Israel” and the settlers. He described the settlers as a “special interest group” in their own “ghettos.” Then suddenly, on one recent tragic night, the walls came down between northern Tel Aviv and southern Mount Hebron. In kidnapping, as in war, “We are all one people,” “We all pray for the return of the boys home,” and “We are all with the families of the hostages.”

It is natural that at this crucial time all attention is focused on the efforts being mounted to find the kidnapped boys, and one’s heart goes out to the anxious families. Nonetheless, one must also wonder how it is that secular Israelis willing to divide Jerusalem and cede Israeli sovereignty over the Temple Mount for the sake of peace could be dragged along for years by a small nationalistic minority from clash to clash. How is it that men and women who voted in droves for a party that ran on a ticket rejecting religious coercion are bowing their heads in the face of nationalistic, messianic coercion?

On the one hand, a significant majority of Israeli citizens will not risk traveling through the occupied territories in their car or on public transportation. On the other, they feel responsible for the fate of the people who raise their children in the very heart of the territories and behave like lords of the land there. To fully understand the mindset of the hard-core settlers — as opposed to the majority of settlers, who moved to the territories in search of an affordable “quality of life” — it is worth reading the impressions of the American journalist Jeffrey Goldberg during a visit to Hebron 10 years ago.

In an extensive piece in The New Yorker, Goldberg describes a conversation with Anat Cohen, a resident of the Jewish quarter of Hebron. “I asked her how she could let her son play amid the barbed wire and soldiers and barricades, and with snipers in the hills above. ‘Hebron is ours,’ she said. ‘Why shouldn’t he play?’ ‘Because he could get killed,’ I said. ‘There’s a bullet out there for each one of us,’ she said. 'But you can always die. At least his death here would sanctify God’s name.'”

Goldberg went on to ask Cohen how she reconciled her decision to live in Hebron with an even greater Jewish imperative (mitzvah) — the sanctity of life — and in this case, the sanctity of her children’s lives. “She glared at me. ‘Hellenizers’ — secular Jews — ‘will never understand,’ she said with contempt” before telling him the story of Hanna, who ordered her seven sons to disobey an order by King Antiochus to bow to a statue (Tractate Gittin 57b). After the last of her sons was executed, the mother threw herself off a roof. The Talmud states that upon her death, a voice was heard from heaven singing “A happy mother of children.”

Like Cohen, Rachel Frenkel, the mother of one of the kidnapped youths, relates to the fate of the fruit of her loins as an edict from heaven. She, too, like her friends on the right, refuses to see the connection between her decision to send her son to school in the occupied territories — or “contested” territories, according to one official Israeli version — and the risks involved. Frenkel told the kids who surrounded her at the plaza of the Western Wall that she believes the kidnapped youths will be returned to their families’ fold, and added, “Whatever happens, Hashem [God] does not work for us.” In trying to lift the spirits of those who came to console her, she added, “Don’t forget, God forbid, if something else happens.”

Anyone following the events at Joseph’s Tomb in Nablus (designated as Area A, under complete control of the Palestinian Authority) would not be surprised at the kidnapping of settlers' children. For years, the political echelon has been cooperating indirectly with a group of religious zealots who infiltrate the place and invite by their behavior terror attacks designed to serve as leverage for bargaining.

A website that reports on events at the tomb describes a typical incident, which took place in January 2008 at 2 a.m.:

A follower of the Breslov Hassidic group, who entered the site without permission or prior coordination, heard the voices of Palestinians nearing the prayer hall. “I started calling, ‘Rabbi Nachman, Rabbi Nachman, save me … ’ (a reference to the founder of the Breslov Hassidic court). The Arabs threw stones at me. I heard them coming down the stairs and shouting, ‘Get out Jew, get out,’ ‘Slay the Jew.’ I knew they were coming to slaughter me. … I started screaming with all my might: ‘Joseph, Joseph! I came here for you. Save me. Get me out of here. …’ All of a sudden I heard the voice of an old man shouting in Arabic at those who were getting near: ‘Go away! Get out, all of you! Don’t you dare come near the Jew!’ I heard that the old man, who showed up out of nowhere, wasn’t content with just shouting but also threw stones at them. I really felt that Joseph, the righteous one, had come to save me.”

Settler-run Channel 7 reported that one of the people from the rabbinical college in the Yitzhar settlement who was summoned to help had called the commander of the Samaria division and told him that there was an imminent threat to the life of the Breslov follower. “The commander prepared lookouts and a military force to enter the site. In those days of the [Jewish] month of Heshvan in the year 5,764, it was a particularly complicated operation. … The division commander started implementing a contingency plan [“Hannibal procedure”] for the kidnapping of civilians or soldiers — a plan which requires maximum preparedness, which entails preparation of forces, activation of intelligence sources, scans and the deployment of hundreds of soldiers.”

It is to be hoped that the kidnapping of the three youths ends in the best way possible, but as long as the Israeli public bows its head in the face of nationalistic messianic coercion, it is hard to believe this is the last tragedy.