Jewish heritage in the West Bank, a tool of Israel’s right

Education Minister Rafi Peretz announced that he plans to expand school trips to Jewish heritage sites in the West Bank, generating angry reactions from politicians from the center-left. 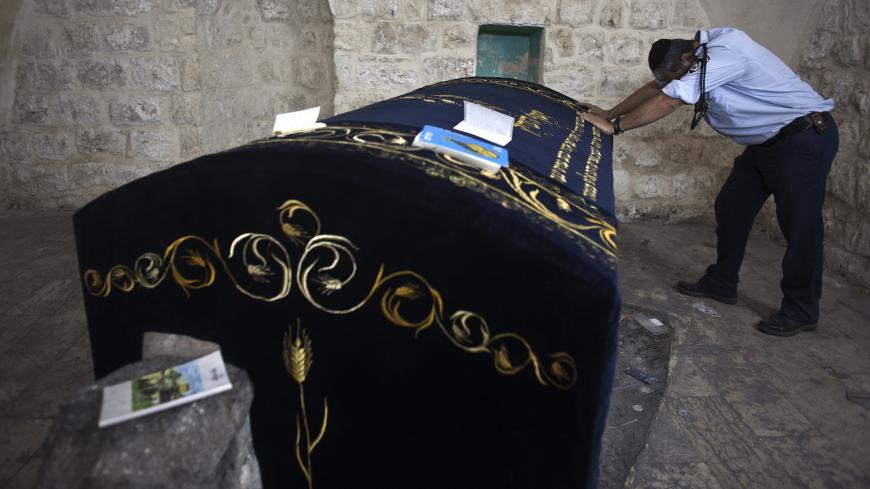 The release of Minister of Education Rabbi Rafi Peretz’s plan to expand school trips to Jewish heritage sites in the territories caused a huge uproar in the ministry, which spilled over into politics. The minister envisions students visiting Joseph’s Tomb in Nablus, Shiloh River, Harasha Mountain and other sites across the Green Line. In response, Director General of the Ministry of Education Shmuel Abuav claims that Peretz has no authority to make such a decision, and that final approval for these trips must come from the security forces. Politicians are now responding with everything from congratulations “on this historic decision” (from the right) to sharp condemnation (from the left).

A closer look found that both the praise and condemnation were excessive. Though Peretz announced the plan on Aug. 20, the policy had been implemented in the educational system several years ago. The question is whether students, who visited the Tomb of the Patriarchs at age 15, will come to reject peace in the future as a result of these field trips? Will Israeli youth be able to visit these sites without seeing them through a political lens?

Soon after Gideon Saar was appointed education minister in 2009, he announced his plans “to strengthen Jewish values.” He interpreted this to include visits to David’s City archaeological park in Jerusalem. Thousands of students have visited the site since then. In 2011, Saar initiated a program called “Let’s Visit Hebron,” to bring students to see the Jewish sites in Hebron, including the Cave of the Patriarchs. He did so at the request of Malachi Levinger, head of the West Bank Kiryat Arba-Hebron local council. As expected, Levinger praised the initiative, calling it a “historic decision.” When Saar announced about one year later that he was adding a site in Samaria (ancient Shiloh site) to these field trips, about 500 parents signed a petition opposing field trips across the Green Line, claiming that these trips normalized the occupation.

In 2016, it was reported that the Israel Defense Forces approved a new military order allowing visits to dozens of historic sites in the West Bank, including Sebastia, Mount Gerizim, Nahal Shiloh and Harasha. Acting behind the scenes was the Samaria regional council, motivated by the belief that “students in the educational system must come visit the site that gave birth to the Jewish people.”

Peretz makes no effort to hide the real purpose of these visits. “It is important for students to visit Samaria when they are 16, so that they come to live here when they are 30,” he said, while releasing the Rightward party’s housing plan on Aug. 20. In saying this, he confirmed what many on the right knew all along, and what many on the left suspected for a long time. The idea behind school trips to the occupied territories is to acquaint teens with their Jewish heritage. It is also an important part of the settler right’s larger strategy.

Yonathan Mizrahi, an archaeologist and general manager of the nongovernmental organization Emek Shaveh, is very concerned about the politicization of these trips. In a conversation with Al-Monitor, Mizrahi said, “No one denies the fact that there are Jewish heritage sites in the West Bank, but still, there can be no doubt that this move is politically motivated. Jewish history is not limited to the West Bank. It can also be found in the Galilee, where there are historic synagogues, and other important sites like Tzippori. Then there is also the Zionist side of things. I believe that students need to get to know the history of the land and not just the history of the Jewish people.”

What impact do these trips have on students? Adi Kochavi, 39, from Modi’in, thinks that one trip to Hebron will not influence her adolescent children, who, she said, are well aware of the human rights situation in the territories. “If their school was to organize a trip to Joseph’s Tomb [near Nablus], and it was safe, I would not oppose it. On the contrary, they’ll get to see the checkpoints and the Palestinians, even if no one talks to them about that,” Kochavi told Al-Monitor.

But others have a different view. Eliaz Cohen, a poet, peace activist and leader of the “Land for All” initiative, who lives in Gush Etzion settlement bloc, told Al-Monitor that he does not believe that these teens will be exposed to the reality in which Palestinians live if there is no proper guidance. “Instead of saying that the land belongs to the people, we need to talk about how the people belong to the land, and to learn about all the historic layers of this land. This means not just its Jewish history, but also its Muslim and Christian history, since they were the dominant cultures here for the past 1,800 years,” he said.

A study conducted in 2008-2016, which examined the political identification and orientation of young Israelis, found that young people voting for the first time tend to be more right wing and religious, even when compared to youths their own age in the past. Based solely on the results of this study, it is impossible to determine whether this is directly related to school trips to Hebron or classes on Jewish heritage in school.

The commotion of the month surrounding field trips to Joseph’s Tomb and other heritage sites in the occupied territories will certainly be forgotten after the Sept. 17 election. Nevertheless, it seems apparent that these tours will continue. After all, the key figures behind this initiative are not limited to religious Zionist leaders like Rightward seniors Peretz and Naftali Bennett; they also include secular leaders of the right like Saar.

The center-left also sees heritage sites in the territories through a political lens. Party leaders and members alike lack an emotional and historic component in their reactions, maybe because they don’t know how to handle the issue of important Jewish sites in the context of partition and a two-state solution. While the right considers these biblical symbols justification for Israeli control over the territory lands, the left has a hard time recognizing their importance. Perhaps it is because they worry that recognizing their significance could cause the ideology of separation from the Palestinians to collapse.

Where is the middle road? Does it even exist in the impossible reality of a longstanding conflict? Cohen believes that there is no contradiction between love of the land in its entirety, a desire for dialogue and a solution to the conflict. “Even if these sites come under the sovereignty of another nation, it will still be important to recognize them and visit them,” he said. “At the same time, Palestinians should also be able to visit Haifa and Acre. Guides familiar with the history and legacy of the land will speak about both peoples’ narratives and the land’s rich and diverse history.”