Three major US religious delegations have visited Iran since March, seeking to broaden US-Iran dialogue and support the nuclear talks. 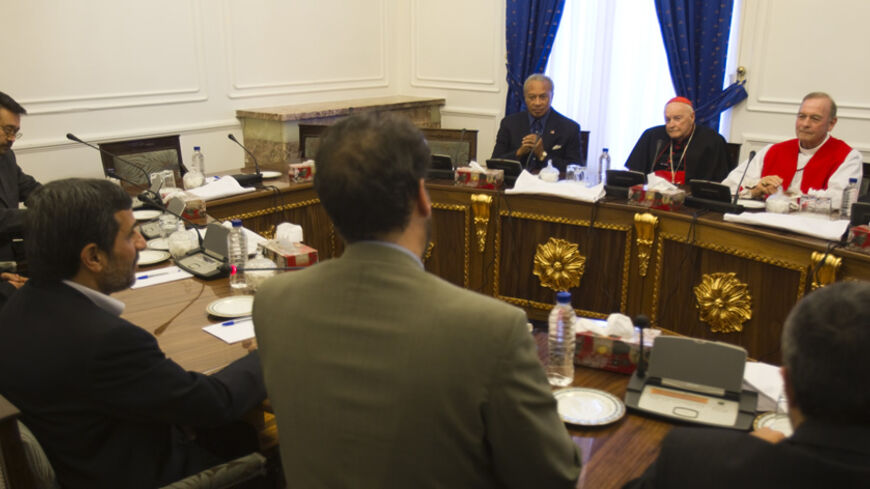 Iran is reopening the gates to delegations from the US religious community as part of a broader outreach meant to smooth the way for a nuclear agreement and improve relations with the United States.

Since March, three major faith-related US delegations have visited the Islamic Republic of Iran for meetings with senior Shiite Muslim theologians and government officials.

A Roman Catholic group, led by Bishop Richard Pates of Des Moines, Iowa, drafted a joint declaration against the “production, stockpiling, use and threat to use weapons of mass destruction” that was signed by Pates, Cardinal Theodore McCarrick — the retired archbishop of Washington — and two Iranians, including Ayatollah Ali-Reza A’arafi, a senior member of the Supreme Council of the Society of Qom Seminary Scholars.

In Iran for six days in March, the six-member US group also met Ayatollah Morteza Moghtadaei, a member of the Assembly of Experts, which chooses Iran’s supreme leader, and had dinner with Ayatollah Javad Shahristani, Iraqi Grand Ayatollah Ali Sistani’s representative in Qom. Returning to the United States, they briefed US officials including White House chief of staff Denis McDonough, Deputy Secretary of State Bill Burns and Sen. Tim Kaine, D-Va., said Stephen Colecchi, director of the Office of International Justice and Peace at the United States Conference of Catholic Bishops, which organized the trip. He said they are also sharing their experiences with bishops and congregations all around the United States.

In May, a group of American Catholics, Protestants and a Sunni Muslim spent a week in Iran and attended a conference in Qom on confronting religious extremism. Robert Destro, professor of law at the Catholic University of America law school, said the group, which included a spiritual adviser to President Barack Obama, Florida mega-church pastor Joel Hunter, “met with a lot of interesting people including three grand ayatollahs.”

More recently in June, two dozen Mennonites spent three weeks in Iran — twice as large as previous groups from this faith that have gotten permission to visit the Islamic republic in the past.

Ed Martin, director of the Center for Interfaith Engagement at Eastern Mennonite University in Harrisonburg, Virginia, told Al-Monitor that the group obtained a record 27 visas, though in the end only 23 people went. Even more remarkable, he said, the visas were approved a month before their scheduled departure — a rare circumstance for a country that usually authorizes visits by Western delegations at the last minute. Their visit followed the first trip to the United States by a group of Iranian female seminarians.

Interfaith dialogue has an obvious appeal for a country ruled by clerics. The Mennonites, who emphasize conflict resolution, have been visiting Iran since 1991. Other groups began traveling to Iran in the late 1990s during the presidency of Mohammad Khatami, a cleric and intellectual who initiated what he called a “dialogue of civilizations.” Khatami’s successor, Mahmoud Ahmadinejad, fancied himself a philosopher and also encouraged interfaith interaction. But many US groups boycotted Iran after Ahmadinejad held a conference in Tehran that questioned the Holocaust and appointed a Holocaust denier to head a major government think tank. Visa approval for Americans, meanwhile, became vastly more complicated after the disputed 2009 presidential elections in Iran that were followed by a massive crackdown on peaceful demonstrators.

Last year’s less controversial election of Hassan Rouhani — a former think tank head — changed the situation, and it has become easier for Americans, including journalists, to obtain visas to travel to Iran.

Colecchi told Al-Monitor that his group had written to the president of the Supreme Council of the Society of Qom Seminary Scholars two years ago to try to arrange a visit but that the trip only came together this year. He said the Catholic theologians were surprised to find how much they have in common with their Shiite Muslim counterparts.

“The way Shia Islam does religious reflection is very similar to the Catholic tradition,” Colecchi said. Both stress “faith and reason,” venerate past religious figures and have a tradition of what he called “living interpretation” of religious rules.

Since the focus of their trip was the nuclear dispute, Colecchi said his delegation pressed the Iranian clerics about the fatwa by Supreme Leader Ayatollah Ali Khamenei against nuclear weapons and other weapons of mass destruction.

Colecchi said the Catholics repeatedly asked whether the fatwa could be reversed. He said the Iranians replied that such rulings could change “by way of development but not contradiction.” He said they gave as an example a ruling by Ayatollah Ruhollah Khomeini, the founder of the Islamic Republic of Iran, against chess. The fatwa was directed against the gambling that often accompanied the traditional Iranian game and was refined to allow the game, but not the gambling, Colecchi said.

For Iran to develop nuclear weapons would “undermine the authority of the supreme leader and the integrity of their religious tradition,” Colecchi said. He added, however, that while Iran is led by clerics and “the religious establishment in Iran is against the acquisition, stockpile and use of nuclear weapons, that does not mean there may not be hard-liners with a different view.”

Colecchi told Al-Monitor that the group was warmly received by ordinary Iranians, including young people at a major shrine in Qom who took “selfies” with the bishops dressed in their clerical cassocks. On the other hand, he said, he could not get into his Twitter account or access the Conference of Bishops' website because of the Iranian government's filtering of the Internet. He said he hoped that the visit was just the beginning of a conversation that would expand to include human rights and Iran’s heavy use of capital punishment. Capital punishment has only been strongly discouraged by the Roman Catholic Church relatively recently, under Pope John Paul II.

The Mennonites, meanwhile, raised the nuclear issue with ordinary Iranians they encountered who were “hopeful that an agreement would be reached but also wanting it to be fair,” Martin said.

Members of his delegation attended a conference on philosophical thought held in honor of Ayatollah Morteza Motahhari, a key figure in the Iranian revolution who was assassinated in 1979. Among those speaking at the conference was Ali Larijani, a son-in-law of Motahhari who is the speaker of the Iranian parliament and a former chief nuclear negotiator. According to Martin, Larijani — who wrote his doctoral dissertation on the works of the German philosopher Immanuel Kant — confined his comments to philosophy, not politics. However, the Mennonites also met with Kazem Sajjadpour, a former Iranian diplomat and adviser to Foreign Minister Mohammad Javad Zarif. Martin said they planned to brief US State Department officials and members of Congress on their trip.

Even though senior US officials are now speaking or otherwise interacting with Iranian officials on a daily basis to try to resolve the nuclear dispute, people-to-people dialogue is crucial to increase knowledge of Iran by Americans and lay the basis for a wider rapprochement, the US visitors to Iran said.

Destro said, “If you’re going to try and open up lines of communication that are more than threats, you have to start somewhere.”