Iranian women theological students pay first visit to the US 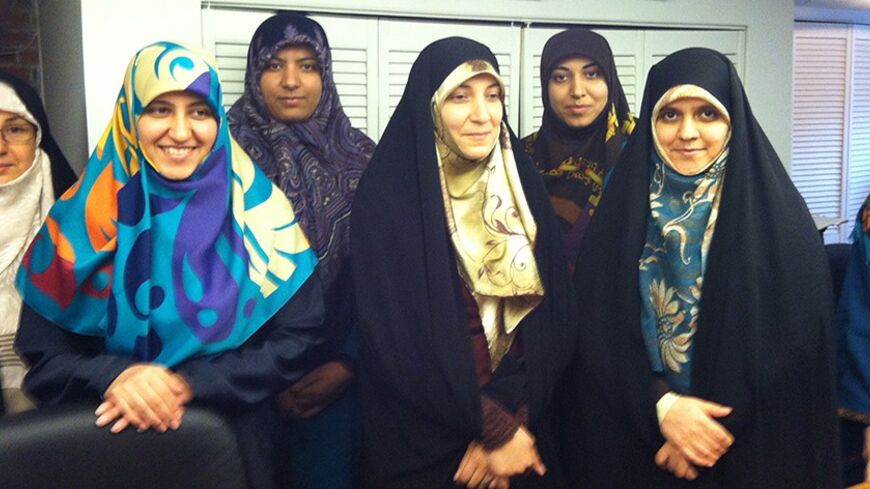 The delegation of Iranian women students from Jamiat al-Zahra on a visit to Washington, May 14, 2014. - Barbara Slavin

As the United States and Iran sat down in Vienna to begin drafting a long-term nuclear agreement, an exchange of another kind was playing out in and around a pastoral university a couple of hours from Washington.

A delegation of Iranian women students from Jamiat al-Zahra, the world’s largest theological seminary for women, is in the United States for the first time to attend lectures at Eastern Mennonite University in Harrisonburg, Virginia. The group of nine women — mostly postgraduate students in their 20s — from the Iranian theological center of Qom, also visited Washington and spent a weekend in the Amish country around Lancaster, Pennsylvania.

Interviewed by Al-Monitor on May 14 in Washington, the young women and their escorts said they already knew a great deal about the United States from their studies and the media, but were favorably impressed by the family values of their Mennonite hosts and especially by the simple lifestyle of the Amish.

They were also eager to show Americans that women in the Islamic Republic have progressed in terms of education and have aspirations for careers. The society as a whole is now more than 85% literate and women outnumber men in Iranian institutions of higher learning, although not in Shiite seminaries.

“We want to be able to use our knowledge,” said one of the students, Fatemeh, in response to a question about whether she would be content to stay home and take care of children after finishing her studies. Making money was not the motivation for working, she added. “If we want to get money, we wouldn’t have gone to the seminary,” she said.

Mohammad Shomali, dean of postgraduate students at Jamiat al-Zahra, who accompanied the women on their trip, said he had arranged to send a few male theological students to the United States every year for more than a decade but felt the time was right to bring women. Plans for the visit predated the election last summer of Hassan Rouhani as president, but the political climate for the trip has improved since the exit of Rouhani’s predecessor, Mahmoud Ahmadinejad.

Founded in 1984, Jamiat al-Zahra is the largest seminary for women in the world, Shomali said, with 5,000 Iranian students, 1,000 international students and 10,000 enrolled in distance learning. The delegates of the group in the United States are all in the postgraduate section of the university’s international department.

“We try to train them to play an active role internationally,” Shomali said. They take courses in interfaith dialogue, peace studies, human rights and the family. Women from the university have previously visited Italy and Canada, he said.

At Eastern Mennonite University, they are enrolled for three weeks in the university’s Summer Peacebuilding Institute. In Washington, they visited the Library of Congress and were to meet later on May 14 with American Sunni Muslims at the El-Hibri Foundation and take part in a meeting at Georgetown University that is open to the public.

Shy at first, the young women began to loosen up during a conversation at the Capitol Hill offices of the Mennonite Central Committee. All spoke English.

One woman named Zahra, wearing a colorful headscarf, said Americans underestimate Iranian women. “Women in Iran have everything normal women in the world have,” she said, “education, dignity, freedom and love. … When it comes to knowledge and piety, there is no limitation for women to be perfect and sometimes they can be more perfect” than men.

Women, however, do not play decisive roles in the Iranian government, which is dominated by male clerics, and face other discrimination in terms of family status and employment. So far, no woman has been allowed to run for president, although there are several women members of parliament and senior officials in the Rouhani government. Asked if an Iranian woman would be able to be president someday, Zahra said, “maybe in the future.”

A number of women said they were postponing having children to be able to concentrate on their studies. Fatemeh, who has been married for six years, praised her husband for giving her the freedom to travel in Iran and internationally.

“People in America know us through the media,” Fatemeh said. “I’d like the Americans to know there is no problem with us as a people. We made good friendships here and I can go back to Iran and say I have many good American friends and I love them.”

Asked what they consider the biggest problem in Iran, several women mentioned sanctions that have severely hurt the Iranian economy and interfered with the supply of medicine and medical devices to Iran. However, the women also faulted their own society’s growing consumerism, which in Iran and elsewhere in the world, illustrates and aggravates the gap between rich and poor.

Several mentioned the huge amounts of money middle-class Iranian families feel obliged to spend on weddings and contrasted this with the simple lifestyles they observed among the Amish.

“For me, it was a wonderful experience” going to Lancaster, said another young woman, also named Fatemeh. “I never thought people could live with no electricity, no car, in such a healthy environment.”

Mahnaz, a lecturer from Jamiat al-Zahra, faulted a lack of religious values in Iran for the trend of bigger and bigger weddings. “The poor can’t rent a house and people are spending so much on one wedding ceremony,” she said. “This is against Islamic teaching. You should be concerned about your neighbor” and not indulge in such excess, she said.

The Mennonites, who emphasize conflict resolution, have been going to Iran since 1991, said Ed Martin, director of the Center for Interfaith Engagement at Eastern Mennonite University. They began by providing assistance after an earthquake that killed 35,000 people in Iran’s Gilan province and ended up funding 15 village health clinics, he said.

"The Berlin wall had just come down and it seemed to us as if some people now viewed Islam as the enemy and Tehran replacing Moscow," Martin said. "We wanted to reach out to the people of Iran and build bridges of understanding and friendship."

The Mennonites continue to travel periodically to Iran — Martin has visited more than two dozen times — but stopped after the 2009 elections in Iran, which were marred by allegations of fraud and followed by a harsh government crackdown on protesters. A Mennonite delegation returned to Iran in February.

Shomali, the university dean, said he hoped for better relations with the United States and noted similarities between Quranic and Christian teachings about the importance of peace. “God says about the Quran in the Quran that God guides those who seek his pleasure in the ways of peace,” he said. There are “lots of things we can learn from each other,” he added. Iranians are rational people and “when you are rational, you tend to dialogue.”

He urged more exchanges of Americans and Iranians from a variety of fields, including artists and professionals: He said that to reduce mutual misperceptions and encourage peace, “Nothing can replace face-to-face encounters.”

[This article was updated on May 26.]