Why is Jabhat al-Nusra no longer useful to Turkey?

The Turkish government may be waking up to its failed Syria policies. 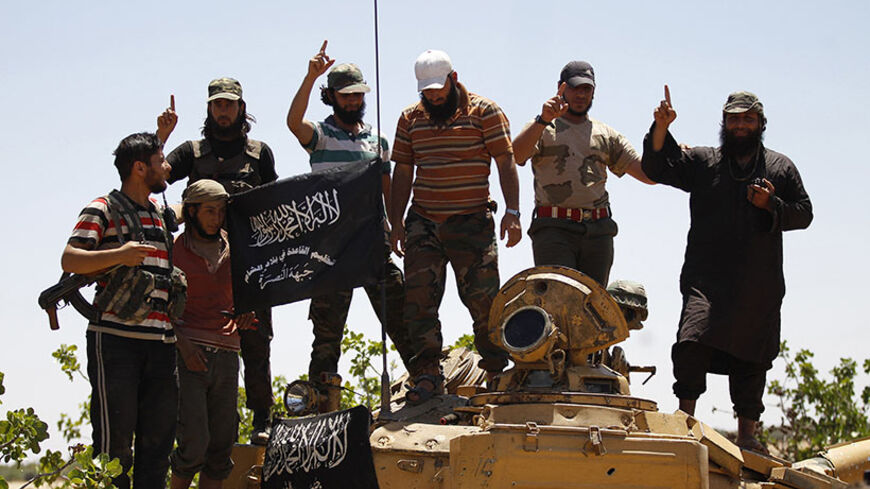 Reluctantly perhaps, given the time it took it to do so, Turkey on June 3 finally designated al-Qaeda-affiliated Jabhat al-Nusra a terrorist organization. The decision was seen as further proof of Turkey’s failed Syria policy, which has left the government of Prime Minister Recep Tayyip Erdogan little choice but to fall in line with the United States with regard to radical groups fighting in that country.

The decision to ban Jabhat al-Nusra also comes tellingly less than a week after President Barack Obama announced that aid to Turkey, as well as Jordan, Lebanon and Iraq, would be increased so that they can “confront terrorists working across Syria’s borders.”

During his May 28 speech to graduating West Point cadets, Obama also said he would work with Congress to “ramp up support for those in the Syrian opposition who offer the best alternative to terrorists and brutal dictators.”

Despite denials by the Erdogan government, Ankara has for some time now been suspected by the West, and openly accused by the opposition in Turkey, of supporting Jabhat al-Nusra and other such groups in Syria.

It is no secret among diplomats in Ankara that this group was initially considered by Erdogan and Foreign Minster Ahmet Davutoglu as the most effective force against the Assad regime that they wanted to see toppled.

Ankara was reportedly annoyed when the United States declared the group a terrorist organization in December 2012, arguing that this was a “hasty” decision, given the headway the group was making against the Syrian army.

There was also speculation that Ankara was using Jabhat al-Nusra against Kurdish groups in Syria aligned with the Kurdistan Workers Party (PKK), to prevent them from controlling regions adjoining the Turkish border abandoned by Assad’s forces.

Jabhat al-Nusra’s self-declared jihadist ambitions and the brutal tactics it employed against its enemies, however, moved the UN to also blacklist it in May 2013, increasing pressure on Ankara to distance itself from the group.

Ankara continued, however, to equivocate on this matter, which was also apparent in remarks made by Davutoglu to a group of journalists in Istanbul, including Al-Monitor’s Amberin Zaman, a few days after the UN ban.

“Jabhat al-Nusra is the result of the quagmire there. Continually referring to it is having the effect of making it loom large. While they were a controllable group comprising 500-600 people initially, today they number 5,000-6,000. In other words, declaring them a terrorist organization has resulted in more harm than good. Otherwise, we see Jabhat al-Nusra the way we see al-Qaeda,” Davutoglu said.

Responding to a parliamentary question by a deputy from the opposition Republican People's Party (CHP) in August 2013, Davutoglu was more direct. He referred to Jabhat al-Nusra as a group that supported extremism and which is on the US' and the UN’s list of terrorist organizations.

Despite such indirect acknowledgements of Jabhat al-Nusra’s status as a terrorist group, it took nine months for Ankara to finally designate it as a terrorist organization by a government decree published in the Official Gazette.

The question arises as to why the Erdogan government decided to blacklist Jabhat al-Nusra now, after having resisted doing so for so long. The simple answer seems to be that its Syria policy is in tatters, after all the horses it bet on lost one by one.

Syrian President Bashar al-Assad has proved to have staying power, and his latest election gambit shows that he will remain in place for the foreseeable future. In the meantime, it has become apparent that there will be no direct Western-led military intervention against the Syrian regime, which continues to get major backing from Russia and Iran.

The Erdogan government has no choice at this point but to also accept that as far as the United States and Europe are concerned, the emphasis in Syria has shifted from toppling Assad to combating the al-Qaeda-affiliated jihadist groups in that country.

Looked at in retrospect, these groups have posed the most important obstacle to Ankara’s policy of pushing for international military action against Assad. They have also prevented the Syrian opposition from being armed with the necessary weapons to fight the Syrian army.

The United States and some Western countries, like France, were not averse at first to arming the Syrian opposition with sophisticated weapons. These countries even appeared willing to start a bombing campaign against Assad’s forces after chemical weapons were used in that country.

They pulled back, however, not only because it could not be established conclusively who used the chemical weapons, but also because of the fear that jihadist groups could fill the political vacuum left by the Assad regime if it were to be ousted by a military intervention.

The idea of providing the Syrian opposition with heavy and sophisticated weapons was also overridden by fears that these could fall into the hands of radicals and be turned against the West in the future.

Put in a nutshell, the groups that the Erdogan government may have once seen as providing an advantage against Assad turned out in the end to be serious liabilities for Turkey’s ill-fated, and in hindsight ill-considered, Syrian policy. This liability increased after Syria-related terrorist attacks started to take place in Turkey.

The main attack of this sort, which concentrated Turkish minds and turned the public even more against the government’s Syria policy, was the Reyhanli twin car bombing on May 11, 2013, which left at least 50 dead. Although the government was quick to blame Assad loyalists, the opposition in Turkey still insists that it was jihadist groups that carried out the attack.

Meanwhile, the so-called “Sunni Axis” against Syria, comprising Turkey, Egypt, Saudi Arabia and Qatar, fell apart without having influenced the course of events against Assad. Today, members of this “axis” not only bear grudges against each other, but are also deeply suspicious of each other’s intentions, for a variety of reasons.

This has limited Ankara’s options further, and forced it not only to coordinate its Syria policy more closely with Washington, but to also remain open to fresh regional overtures from Iran, which appears the winner today, given developments in Syria and the crumbling of the “Sunni Axis.”

It was significant, therefore, that Iranian President Hassan Rouhani, who arrived in Ankara this week for talks, should have told reporters during his news conference with President Abdullah Gul on June 9, that Turkey and Iran were determined to combat extremism and terrorism in the region “and to promote true and divine Islam in the world.”

Turkey’s banning of Jabhat al-Nusra is vindication, not just for Iran but also for Russia, of course. Both countries, which support the Assad regime, have been arguing from the start that Syria is under threat from radical terrorist groups that are being aided by outside powers. The media in those countries, as well as some politicians, have on many occasions pointed at Turkey in this regard.

The banning of Jabhat al-Nusra by the Erdogan government, however, ultimately provides vindication for Assad, who has been maintaining that he is fighting terrorism by groups that don’t want to bring democracy to Syria but establish a fundamentalist Islamic republic with the aid of outside forces.

All of this is politically embarrassing for Erdogan and Davutoglu, who tried to prioritize the demise of Assad over combating radical jihadist groups in Syria, but ended up in a position where Assad and his key international supporters appear justified with regard to groups like Jabhat al-Nusra.

All that is left for Turkey to do at this state is therefore to cooperate with the United States and other allies against these groups, and to “ramp up support for those in the Syrian opposition who offer the best alternative to terrorists,” to use Obama’s words. There is, however, no guarantee that this will expedite Assad's demise, which Erdogan clearly dreams of.

Speaking at a farewell luncheon in his honor in Istanbul on June 5, departing US Ambassador to Turkey Francis J. Ricciardone underlined that “there was important national security collaboration going on” between Ankara and Washington, which he said was also aimed at strengthening the control of Turkey’s borders.

Turkish Foreign Ministry Undersecretary Feridun Sinirlioglu was preparing for a visit to Washington, around the same time, to meet with State Department officials and members of the National Security Council (NSC) and hold talks designed to build on Obama’s West Point announcement and chart the future course against groups like Jabhat al-Nusra.

The bottom line is that Turkey is finally beginning to toe the line on these radical groups in Syria, having no use left for them, and instead facing potential threats to its own security from them.