A former Islamic Jihad leader has announced the creation of a new “resistance faction” in the Gaza Strip, which has been accused of promoting sectarianism. 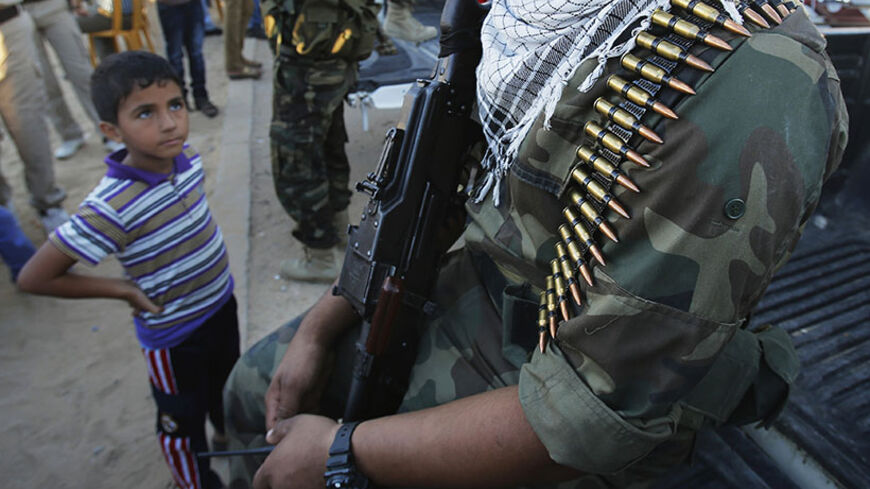 A Palestinian boy looks at a militant during a rally organized by Islamic Jihad in Rafah, Oct. 24, 2013. - REUTERS/Suhaib Salem

GAZA CITY, Gaza Strip — Those attending the funeral of Palestinian resistance member Nizar Issa, who was killed during an explosion at a resistance training center in the northern Gaza Strip on May 25, were surprised when Hisham Salem, a well-known figure in Gaza, declared the start of a new resistance movement in Palestine and proclaimed Issa as the first martyr in the ranks of this movement.

The new movement is called “Al-Sabirin [The Patient] for the Victory of Palestine,” or “Hosn” by its Arabic acronym. Its flag looks a lot like that of Lebanon's Hezbollah in form and color — the reason why Salem’s local opponents accused him of promoting a Shiite current — which raises significant concerns for Palestinians about an outbreak of sectarian strife in the Gaza Strip and turning Gaza into a second Iraq.

What makes those accusations real for observers is the proliferation of YouTube videos showing Salem talking about historical events that are important to Shiites, such as the battle of Karbala and the killing of Imam Hussein.

These accusations and suspicions about Salem and his new movement are based on his historical organizational background. A source familiar with the Islamic Jihad movement said that Salem was regarded as “one of the leaders of Islamic Jihad in the northern province, but he was fired four years ago for [promoting sectarian strife].”

The source, who preferred to remain anonymous, told Al-Monitor that the nature of these ideas is to promote Shiite thought. He said, “This is bad for our reputation in Sunni Palestinian society, which rejects sectarian pluralism for fear of a sectarian war in Gaza.”

It was shown that the leadership of Islamic Jihad, despite its political closeness to Hezbollah and Iran, cannot withstand the promotion of sectarian Shiite thought in the Gaza Strip and wants to maintain the movement as Sunni, to be in line with the Sunni religious thought followed by Palestinian society.

Salem, who considers himself one of the most prominent leaders of the Hosn movement, spoke with Al-Monitor and confirmed that he was a former official in Islamic Jihad and that he was dismissed because of “differences in views,” without going into the nature of these differences.

Salem denied accusations that his movement is a Shiite current: “This is untrue. We have always believed in Islamic unity, and I see no reason to separate as Sunnis and Shiites.”

On the similarity of his movement’s banner with that of Hezbollah, he said, “This is an unintended coincidence. All the banners of the Palestinian factions are similar in terms of their content and symbols.”

Despite Salem’s insistence that his movement does not promote any Shiite ideas in the Gaza Strip, he strongly denounced the beliefs prevailing in Palestinian society that Shiites constitute an existential threat to the Sunni environment. He said, “I don’t think that Shiites don’t like Sunnis. I am suspicious of that. The Shiites are providing substantial assistance to the Sunnis, and an example of that is the historic Iranian support to Palestinian parties.”

He also defended his appearance in videos that were said to be promoting Shiite thought and said, “I’ve been talking about the two incidents of Karbala and Imam Hussein. They are not just for Shiites. It would be ignorance to link these events to [just] the Shiite current.”

About the sources of support for the Hosn movement, he pointed out that there is no solid support now. But Salem, who runs a charity association named al-Baqiyat al-Salihat, said that his association primarily relies on Iranian support. The Hamas movement had shut down the association in April 2011 for allegedly spreading Shiism.

Salem was arrested by the Hamas government in March 2013, with the daily Al-Sharq Al-Awsat writing: “The internal security apparatus of the government arrested Salem, who is known to have good relations with the Shiites of Iran and Hezbollah.”

Salem confirmed that he was arrested twice by the Hamas government, attributing the arrest to a “misunderstanding” on the part of the government. He pointed out that he was also detained for 4½ years in the prisons of the Palestinian Authority before 2006.

Commenting on the announcement about Hosn’s launch, a Hamas official in the northern Gaza Strip, Atef Adwan, said, “This announcement came as a surprise to the government and the movement [Hamas] at various political and security levels. But we will not overdramatize the matter. We will put it in its natural context, because the birth of such a phenomena amid the confrontation with the occupation is not surprising.” He also said it’s likely that the new faction “will not be able to continue in the presence of giant organizations that fill the scene.”

Adwan stressed that Hamas “will not prevent any individual or group effort to resist the occupation.” He postponed any talk about the areas of cooperation with Hosn to the stage when its objectives, connections and funding are clear.

For his part, Hamas official Yahya Moussa denied the presence of currents promoting Shiite thought in Gaza, pointing out that such thought would “cripple the unity of the Palestinian people and fragment the Palestinian arena.”

Speaking to Al-Monitor, Moussa said, “It’s not normal that a man adopts a thought that is outside of the people’s [religion] and beliefs, especially since there is no historical Shiite [religious] reference in Gaza. Anything that promotes this ideology is a threat to our people and is in the interest of the occupation.”

The Hosn movement, according to Salem, has a shura council and an armed military wing, but the number of members is still unknown because he refuses to disclose this information. “I prefer not to reveal that now, but soon we will demonstrate to all our size, equipment and potential,” he said.

He said his movement was headed by a group of known Palestinian leaders, but he refused to identify them at this point.

The same source asserted that Salem is supported by dozens of individuals who have been dismissed from Islamic Jihad over the past years for “inciting sectarian prejudices.” The source believes that Sheikh Abdallah al-Shami, an official who had been ousted from Islamic Jihad five years ago, was one of the most prominent Hosn officials.

Political analyst Hassan Abdo said that the current environment in Gaza is not favorable for the announcement of a new resistance movement, pointing out that modern movements represent a “hasty and extreme ijtihad [interpretation] on the margins of the major movements and will not offer anything new.”

Abdo told Al-Monitor that the major movements arose when there was a true absence of resistance, and said, “But now I don’t think that such movements [would add anything new] because of the many Palestinian factions present.”

However, Salem said his movement “was launched to resist the occupation. … It is not a substitute for any organization, but complementary to [other organizations’] role.”

Salem did not rule out that his movement would exercise a political role in the future. “At the level of the internal Palestinian situation, we are ready to serve our people in various ways and areas. But at the level of the relationship with Israel, there is nothing between us except resistance,” he said.