In the absence of an applicable law governing partisan life in Palestine, the Gaza Strip has seen the emergence of dozens of new factions since 2000. 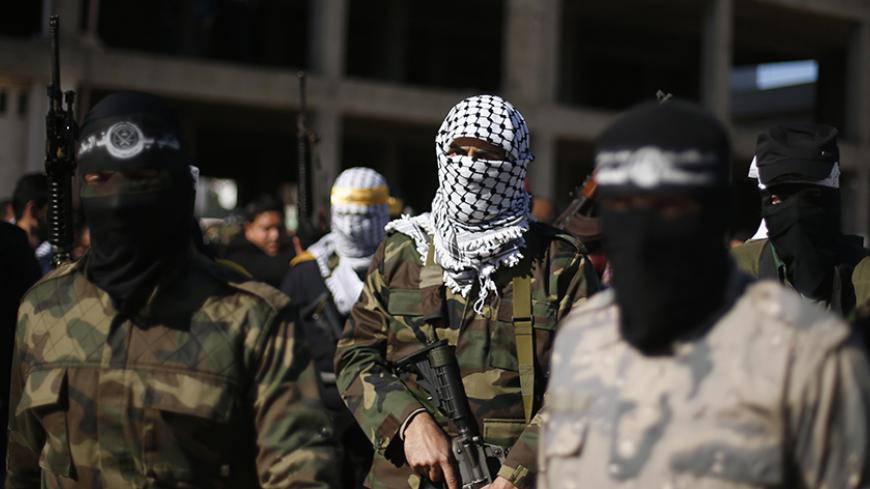 GAZA CITY, Gaza Strip — Al-Saberoon (The Patient Ones), or the Hesn movement, is the newest political and military organization among the Palestinian factions that emerged on the Gaza scene in May 2014. The movement is adding to the political and military work of dozens of factions that emerged to resist the Israeli occupation and work on the political level, since 2000 [in response to the intifada] and until this day.

Hisham Salem, a leading member in the Hesn movement, said that it is an Islamist, political, resistance movement whose main goal is to liberate Palestine, resist occupation and serve the Palestinian people in their homeland and abroad. Salem said the movement did not acquire permission to be operational in the Gaza Strip from any authority. In fact, Hamas does not consider the Hesn movement to be illegal, because it believes that Palestinians are in constant need of liberation efforts through armed struggle.

"Resistance movements do not need permission [to operate]," Salem told Al-Monitor. "Their legitimacy stems from the ongoing occupation in Palestine and from our resistance efforts for the liberation of the Palestinian territories."

Salem said that financial support was not always available for new movements, which is generally the case with factions as they rely on donations from Arab and Muslim parties concerned with the resistance and the services these factions provide.

"Until now our movement has relied on those [parties] as a source of financing and support. However, we seek to have direct relations with and garner support and funding from parties supporting all Palestinian factions in their resistance against the occupation. Iran, Hezbollah in Lebanon and some parties in Arab and Muslim countries, such as Saudi Arabia, support the Palestinian resistance. We are knocking on all doors to acquire support for our movement," Salem said.

Salem said the Hesn movement has yet to receive any funding from any official parties, although some charities affiliated with the movement are working with several Iranian, Lebanese and Saudi associations, which he did not name. “This is indirect support offered by the charities that [Hesn] established to assist the poor, the injured, martyrs [fighters and civilians], families, and owners of destroyed homes," he said. "We have also carried out some charity projects through Al-Baqiyat Al-Salihat Society, which has branches across the Gaza Strip.”

The Hesn movement has not yet announced the formation of a military wing in Gaza. However, it did announce the death of two of its members since its formation, one of whom was killed on the Israeli border with Gaza in May 2014.

There are dozens of political and military factions operating on the Palestinian scene. Factions working under the auspices of the Palestine Liberation Organization (PLO) in Gaza account for more than 10, such as the Fatah movement, the Popular Front for the Liberation of Palestine (PFLP) and the Palestinian People’s Party (PPP). This is in addition to factions independent from the PLO, including Hamas, Islamic Jihad and other smaller factions, such as the Popular Resistance Committees (PRC), the Popular Resistance Movement, the Mujahedeen Brigades and the Ahrar movement.

Atallah attributed this phenomenon to two factors. "First is the failure of old parties to fulfill the aspirations of the Palestinian people and achieve a decent life for them. The second factor is the desire of external powers — such as Iran — to have representatives inside Palestine, since interference in the Palestinian cause is considered an achievement," he said.

Atallah said new parties lack an ideological aspect. "Some parties have a nationalistic aspect and are an extension of the PLO’s policy and culture. But these parties differ from the PLO in terms of management and performance," he said. "Other parties such as new Salafist movements are Islamic forces that believe the Hamas movement strayed from the right path and sought power."

He believes that Palestinian parties reflect failure more than success. "A state of chaos is prevailing as any person can establish a party," Atallah said. "But [these people] are violating the Palestinian Basic Law that prohibits foreign [financial and military] support."

"There must be political plurality within a legal setting governing the political process," Abdel Hadi said. "This plurality should have two aspects: a political aspect for those who wish to play a political role within the PA [and one that] relates to working within the PLO context after reforming the organization for it to be able to accommodate plurality and various parties."

Abdel Hadi believes that the main reason as to why the Palestinian parties are not legally controlled is that Palestine is occupied, and there is no law governing these parties — the Political Parties Law drafted in 2007 has not been revised. He said, "It is difficult to control the military work of factions amid the occupation. Also, no entity was able to unify Palestinians based on the plurality principle. Palestinian political factions will continue to be in conflict, which is benefiting the Israeli occupation."

There are many political and military factions in the Gaza Strip. However, the door is still wide open for the establishment of new factions that are able to find funding sources in the absence of the implementation of a governing law. These new factions exploit the need of Palestine to be liberated.