Many Sinai residents blame coercive security practices by the Egyptian military as the cause of instability. 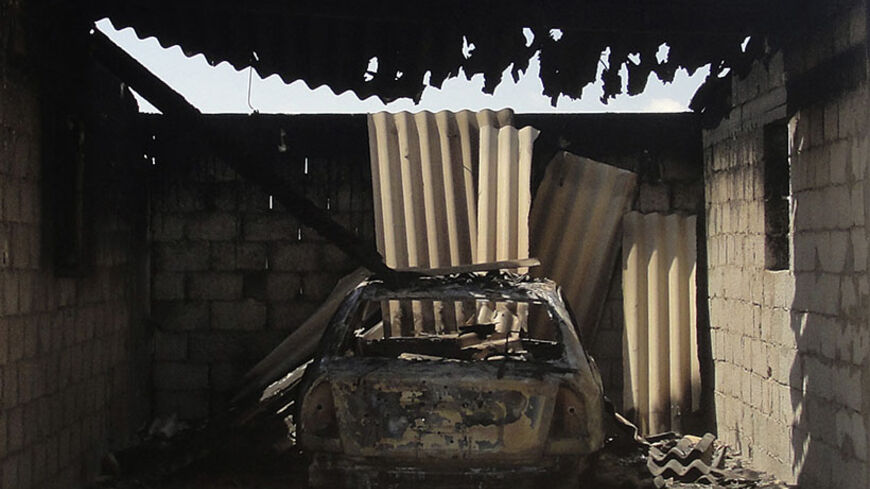 A burned car is seen in a damaged house after assaults on militants by the Egyptian Army, in a village on the outskirts of Sheikh Zuweid, Sept. 10, 2013. - REUTERS

SHEIKH ZUWEID, Egypt — The Sinai Peninsula has become one of the most dangerous places in Egypt. It used to be an example of calm and relaxation before 2004, when the Sinai’s people remained far from the wave of terrorism that hit Egypt in the 1990s.

Since 2004, the Sinai Peninsula has been hit by a number of terrorist incidents, the first of which were three simultaneous bombings in Taba, Nuweiba and Ras Shaitan in October 2004. That triple bombing killed 34 and wounded 125, most of them Israeli tourists. Then in July 2005, Sharm el-Sheikh was struck by three bombings that killed more than 88 people. There was another attack in April 2007 with three bombings that killed 23 people in the city of Dahab.

As a result of these terrorist attacks, the Ministry of Interior began massive security crackdowns by having the state security services lead a campaign of mass arrests affecting thousands of people in the Sinai Peninsula. The arrests were made without evidence of involvement in the attacks, creating conflict between the security forces and Sinai residents. Many were sentenced in absentia, causing a series of violent incidents in the area.

Political activists in the Sinai Peninsula said that the security practices caused those convicted in absentia to form groups and flee to rugged desert areas, where many extremist and violent organizations emerged under different banners.

Since the January 25 Revolution, these armed extremist elements found a favorable opportunity to move on the ground. They conducted a number of cross-border rocket attacks on Israel and bombed the Egyptian gas pipeline to Israel more than 15 times.

When Muslim Brotherhood member Mohammed Morsi became president, he was able to contain these elements and gave them a free hand to operate Sharia courts in the Sinai Peninsula. But after Morsi was ousted on July 3, 2013, these organizations — under the banner of a terrorist organization called Ansar Bayt al-Maqdis — conducted dozens of quality operations and started targeting, for the first time, military and security headquarters in the Sinai Peninsula, killing and injuring more than 400 security elements.

With the start of President Abdel Fattah al-Sisi’s era on June 9, the Sinai Peninsula is still mired in continuous armed attacks on security members and headquarters. Meanwhile, Sinai citizens are languishing under an extremely sensitive and dangerous security situation because the peninsula is close to Israel and the Gaza Strip.

Sinai activists agree that managing security there is extremely complex and will test the ability of Sisi and his administration to restore stability to a very important place within Egyptian national security, without leaving deep wounds in a place with highly sensitive demographic considerations.

Hassan Hantoush, a political activist in the border area in northern Sinai, told Al-Monitor, “The growing feeling among [Sinai] inhabitants is that they are being ignored and discriminated against by the Egyptian authorities. The lack of development, the authorities using [harsh] security measures and the fact that many Sinai inhabitants are being arbitrarily arrested by security forces have helped make Sinai an ideal place to host violent ideas and organizations from the various parts and governorates of Egypt.”

He said, “The new regime should establish security and restore the citizens’ confidence that the state cares about them. That will definitely not be achieved unless [the state] provides decent services and employment opportunities, which have decreased after the smuggling tunnels and illegal trade were halted. The war on the armed groups has also severely affected [employment].”

Mustafa Singer, an Egyptian researcher who is from the Sinai Peninsula, told Al-Monitor, “Security in the Sinai flared because the government lost the moderates and left the area [as a ground for] violence. This is one of the most important areas of the republic, and there may be a catastrophe there.”

Singer said, “The government must establish a real timetable to compensate citizens in the Sinai for the damage and heavy losses caused to them and to their property in the past months. This timetable must be put in place before talking about strategic plans to develop the region.”

Ahmad Saqr, former assistant chief of the Sinai reconstruction agency, told Al-Monitor, “Sisi will face more security challenges in the Sinai in the coming period, especially since the remnants of the radical terrorist ideology that have fled the military battles will work to exploit the [harm suffered by] noncombatants during military operations, to attract and recruit the relatives of those affected.”

Sinai novelist and activist Massaad Abu Fajr wrote on his Facebook page: “Sinai has been suffering from a strategic vacuum since the latter part of [Hosni] Mubarak’s time. … That strategic vacuum is continuing and will continue to generate forms of unrest and instability.”

Abu Fajr said that the real problem lies in the deterioration of the situation in the Sinai Peninsula as a result of the presence of what he called the “lying barrier” between the citizen and the state, adding, “The state looks at the Sinai map and says if there were no Bedouins it would have been better. That is made glaringly clear when the people in Sinai are deprived of all their rights.”

Abu Fajr noted in another Facebook post on his page: “The situation is not reassuring. Peace causes stability, progress and life. Peace is democracy, citizenship and respect for human rights.”

He said, “Bullets will never defeat bullets. They may silence them for a while. For example, in 2004 the state launched a massive offensive on Sinai and violence almost ended. But it returned in 2007. And it returned today, after Morsi’s fall, in a bloodier way. And if it pauses again, it will restart in a more violent way. If we want a solution, we must cure the disease from its roots … by recognizing the rights of the Sinai people in their country, the state and the wealth.”

The Sinai people acknowledge that the coercive security practices are the main cause for terrorism in the Sinai Peninsula. As long as the Egyptian government continues to pursue a security-focused approach to the region while neglecting its other needs, the Sinai will continue to undermine Egyptian security.