The Turkish government is trying to downplay the ISIS detention of diplomats in Mosul. 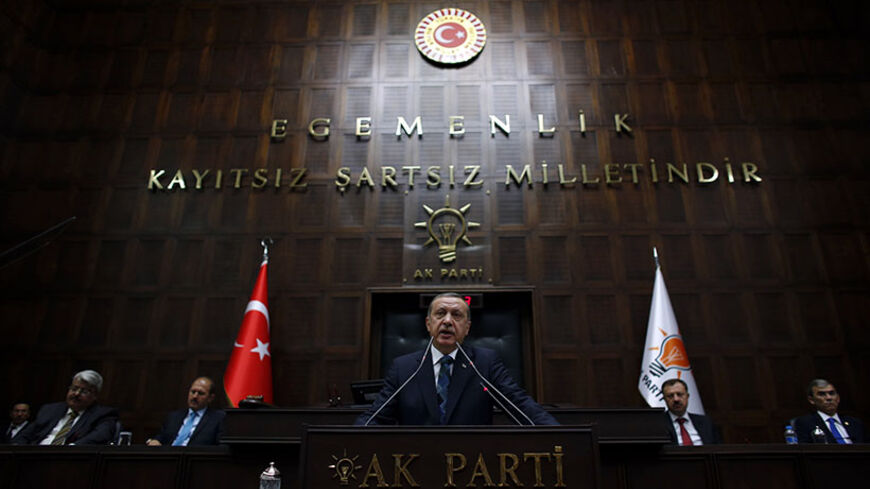 Forty-nine Turkish consulate workers in Mosul have been held hostage by the Islamic State of Iraq and al-Sham (ISIS) since it took over the consulate on June 11. Of the hostages, 15 are diplomats, including the Consul General Ozturk Yilmaz, and the remainder are the administrative personnel and members of the special Turkish police security team. The youngest is an 8-month-old baby. Including the 31 truck drivers taken hostage by ISIS on June 13, 80 Turkish citizens are now being held hostage. Some statements by government officials, however, suggest that there may be more hostages.

Despite this anxious situation, Turkish officials have been persistently avoiding to use the words “hostage” and “hostage taking.” Naci Koru, the deputy foreign minister, in a statement to reporters explained why Turkey does not consider the incident as hostage taking: “We don’t think that these 49 people are taken hostage. Nobody told us that they are hostages. If they were hostages, we could sit down and bargain. There is nobody demanding anything in return [for their release].”

Actually, an ISIS statement also gave the impression that Turkish diplomats were being detained temporarily. Journalist Asli Aydintasbas sent a query to the ISIS Twitter account and asked: "When do you plan to release our diplomats?” She quickly received a tweet reply that read: “I think they will be in Istanbul today.” But since that response on June 12, there has been no sign of the hostages being released.

When one looks at the way the consulate was surrounded by ISIS elements and the hostage taking of the Turkish personnel, one cannot but notice the gross contradiction between the reality and the reassuring Twitter reply and the Turkish Foreign Ministry’s reluctance to use the word "hostage."

Messages send out via social media by a Turkish police guard who was in the building when it was surrounded by ISIS militants suggest that ISIS had designated the consulate and its people as a strategic target.

This police guard said: “ISIS came to the gates with 900 specially trained commandos. …They were equipped with mortars, heavy machine guns, rocket-propelled grenades and four tanks they had looted from the Iraqi army. The special police force in the consulate informed the Foreign Ministry that they will fight until they run out of ammunition. But our Foreign Ministry said they can’t accept to lose their personnel so blatantly, and ordered us not to clash.”

Deputy Prime Minister Bulent Arinc said, "We are talking about 1,000 people with tanks and weapons,” and thus confirmed the police guard's account, in addition to trying to justify why the Foreign Ministry ordered the consulate personnel to surrender without resistance.

Even if we assume that the police guard might have overstated the number of ISIS militants involved given the tense environment, doesn’t ISIS surrounding the building with tanks prove that they were determined to capture the people inside?

It appears that the reassuring Twitter reply and indirect ISIS messages sent to the Turkish government, while the advancement on Mosul took place, was meant to provide assurance that the consulate personnel will not be harmed, and were designed to facilitate the taking of hostages by misleading the Turkish side.

The differences in tone of Prime Minister Recep Tayyip Erdogan’s initial reaction to the hostage taking and his subsequent more restrained remarks also attracted attention. In a statement he made on June 12, Erdogan said he had spoken directly with Yilmaz: “We are now trying to conclude this affair as smoothly as possible. We don’t mind being late, as long as it results in a good outcome.”

As the consul general Erdogan spoke to was the one taken hostage by ISIS, Erdogan’s remark can well be interpreted as implying that he is personally conducting possible bargaining with ISIS.

Daily Yeni Safak, which has good access to government sources, said contacts with ISIS are progressing through four different channels and no opportunity for dialogue is overlooked. Yeni Safak gave detailed information about contact with ISIS:

“Immediately after the crisis broke out, Turkey’s Foreign Ministry made contact with important Arab tribes of the region led by the Nujaifi family, the most respected, influential family of Mosul. The same day as the hostage taking, at 23:30 [11:30 p.m.] indirect contact was established with ISIS. A delegation of three prominent representatives of Arab tribes held their first meeting in the Mosul governor’s office that ISIS is using as its headquarters. After this two-hour meeting, detailed information on the health and safety of our Consul General Ozturk Yilmaz and all the others were conveyed to Ankara.”

“At the moment, we are giving utmost importance to the safety of our consulate personnel, truck drivers and other Turkish citizens. We are being very careful with the steps we take. Unfortunately, I notice that those who should be politically responsible are acting in a provocative manner.”

In Turkey, it's widely accepted that the first sign things are not going right is indicated by accusing the opposition. This is exactly what Erdogan is doing. The second sign that things are getting complicated is accusing the media. In a statement he made on June 15, we heard the prime minister lashing out at journalists: “About 100 of our citizens are in the hands of ISIS elements. While we are exerting efforts for their safe release, what are you trying to achieve by provocation?”

The deputy prime minister’s remarks the same day calling on the media to stop covering the issue is another sign of the growing anxiety of the government. Arinc said, “As deputy prime minister responsible for media affairs [I tell you] that this is not censoring the press, but we know what kind of organization this is. I want to call on you personally to avoid anything that may provoke them.”

The statements by Turkish officials immediately after the hostage taking and the language they have adopted in its aftermath have become distinctly different. The initial optimism has become a restrained approach, and now as the final step we see an appeal to the media “to avoid covering the issue.”

It's now clear things are not progressing as smoothly as Turkish officials anticipated at the beginning, and we may well be facing a prolonged hostage crisis. Although it is not known when and how ISIS will free the hostages, they have obviously selected their targets carefully and have challenged the Turkish government with an unexpected level of enmity.

We may be in for a serious hostage crisis.