US ambassador says Libyan general is going after 'terrorists'

The US ambassador to Libya, Deborah Jones, said she would not “condemn blanketly” the actions of Gen. Khalifa Hifter, whose forces have battled Islamist militias in eastern Libya and stormed the parliament in Tripoli on May 18. 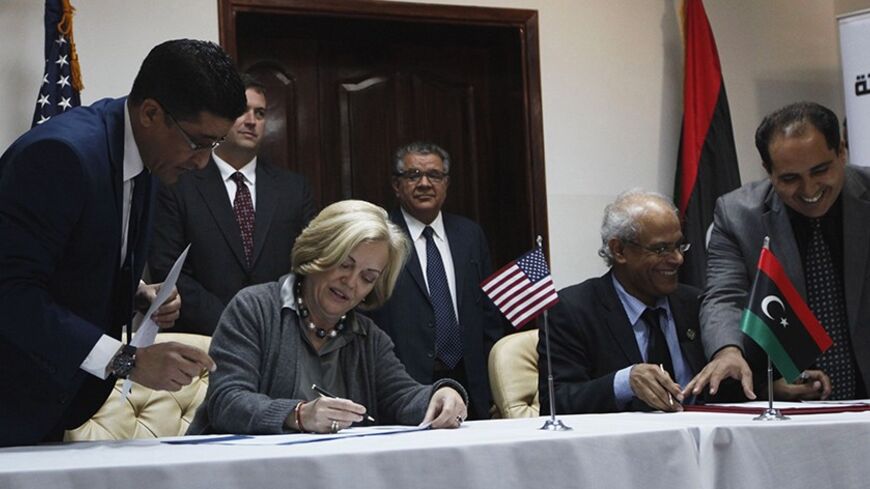 Libyan Justice Minister Salah Marghany (R) and US ambassador to Libya Deborah Jones (2nd L) during a signing ceremony of an agreement at the headquarters of the Ministry of Justice in Tripoli, Libya, Dec. 2, 2013. - REUTERS/Ismail Zitouny

WASHINGTON — US Ambassador to Libya Deborah Jones said Wednesday that she would not condemn the actions of Gen. Khalifa Hifter, a former officer in Moammar Gadhafi’s army who has declared war on Islamic “terrorists” in Libya and forced the country to call new parliamentary elections for June 25.

Speaking at the Stimson Center in Washington, Jones repeated US State Department assertions that the Barack Obama administration did not support and had no advance knowledge of Hifter’s actions — which included sending forces to kill scores of Islamist fighters in eastern Libya last week and storming Libya’s parliament in Tripoli over the weekend. But she added that “it’s very difficult to step up and condemn” Hifter given that his forces are “going after very specific groups … on our list of terrorists.”

“I am not going to come out and condemn blanketly what he did,” she said.

Hifter defected from Gadhafi’s military two decades ago after a failed war in Chad and moved to northern Virginia where he acquired US citizenship. He has claimed that the US government backed him in the 1990s in unsuccessful efforts to overturn the Gadhafi regime.

Karim Mezran, an expert on Libya at the Atlantic Council, told Al-Monitor that there are “widespread rumors that Egypt and the United Arab Emirates” are backing Hifter in hopes that he will expunge the Muslim Brotherhood and other Islamist elements from the Libyan government and even take power as Abdel Fattah al-Sisi did in Egypt after ousting President Mohammed Morsi. “If they can conquer the east, the military balance will be in their favor,” Mezran said of Hifter’s forces.

Jones, asked by Al-Monitor if Egypt and the UAE were behind Hifter, who staged a failed coup in February, said, “I have nothing for you on than that” — the diplomatic equivalent of a non-denial — but that “Libyans who reside in the UAE and Egypt support him.” She added, “I hear a lot of support of his actions against these groups but less for him as an individual. The jury is still out because it’s not clear what the agenda is behind this.”

Egyptian officials did not respond to a request for comment about the Libyan security situation and its impact on Egypt, which is home to as many as a million Libyan refugees. Areas close to the Egyptian border, such as the town of Derna, have been headquarters for extremist groups including Ansar al-Sharia, whose leader, Ahmad Abu Khattala, is a suspect in the attack that killed US Ambassador Chris Stevens and three other Americans in 2012 in Benghazi.

The latest moves by Hifter appear to add only more confusion to a country that has struggled to form a coherent national government since Gadhafi was ousted and killed in 2011 with the help of the United States, other NATO forces and the Arab League. Libya has had nearly half a dozen prime ministers since then and many episodes of political violence, including the fatal attack on the US consulate in Benghazi, the abduction of other diplomats — most recently Jordan’s ambassador — as well as government officials and their relatives and clashes between myriad ethnic, tribal and religiously inspired militias.

According to a recent report by the Atlantic Council, there are at least a quarter million Libyans under arms who are members of militias and on the government payroll even though only about 30,000 men took part in the revolution against Gadhafi. Groups that have pledged loyalty to the government have become part of the problem; a former head of the Petroleum Facilities Guard seized Libyan oil terminals and attempted in March to export oil on behalf of his self-appointed “Political Bureau of Cyrenaica,” but the North Korean-flagged tanker was seized in the Mediterranean by US Navy Seals. Libyan oil exports, which should total more than 1 million barrels a day, are hovering around 250,000 barrels a day.

Jones blamed much of the disarray on Gadhafi, who seized power in 1969 in a country that lacked a strong central government and political institutions.

“There never was a functioning Libyan state per se,” she said. “That weakened state permitted Gadhafi to exploit the situation. … He was like an abusive parent” who squeezed his own people of resources while doling out Libya’s oil revenues on foreign causes and conflicts.

Since the revolution, the United States, European countries and the United Nations have sought to help Libya construct the basics of a functioning state. But plans to train a proper army for the country have been impeded by concerns over who would command them when they get back home. The United States had planned to help train 8,000 Libyans in Bulgaria, but that effort is being reviewed and scaled back, diplomatic sources told Al-Monitor.

With its oil wealth and small population, Libya should be able to prosper if it can establish some semblance of security. But oil also tempts various elements to continue to fight over the spoils, and the country is awash in weapons “liberated” from the Gadhafi regime.

Asked his view of Libya’s future, Michael Morell, a former deputy director and acting director of the CIA, told Al-Monitor, “It is one of the biggest nation-building challenges that I have seen.”

Several countries and organizations have appointed envoys to try to reconcile Hifter’s forces with the moderate Islamists who dominate Libya’s parliament. Among them is David Satterfield, a veteran US diplomat who heads the multinational peacekeeping force for the Sinai. He visited Tripoli recently.

Jones said Deputy Secretary of State Bill Burns had also met with numerous influential Libyans and that she has as well, but she has not been able to travel to eastern Libya because of security concerns. She called the US Embassy in Tripoli “lean and mean” and “somewhat similar to a medieval fortress. Benghazi [the killing of Stevens and three others] will not happen again, but something else will,” she said.

She praised Libya for its “five [UNESCO] world heritage sites, amazing weather and fantastic fish.” But asked if she would advise Americans to travel to Libya, she said not “unless you know Libyans.” Applying what she called the “911 standard,” she said that Americans traveling in Europe in need of help would easily get it, but “if you’re in Libya, you’re going to keep dialing.”