The day commemorating the reunification of Jerusalem, Housing and Construction Minister Uri Ariel has announced further construction in East Jerusalem, driving closer the danger of a binational state. 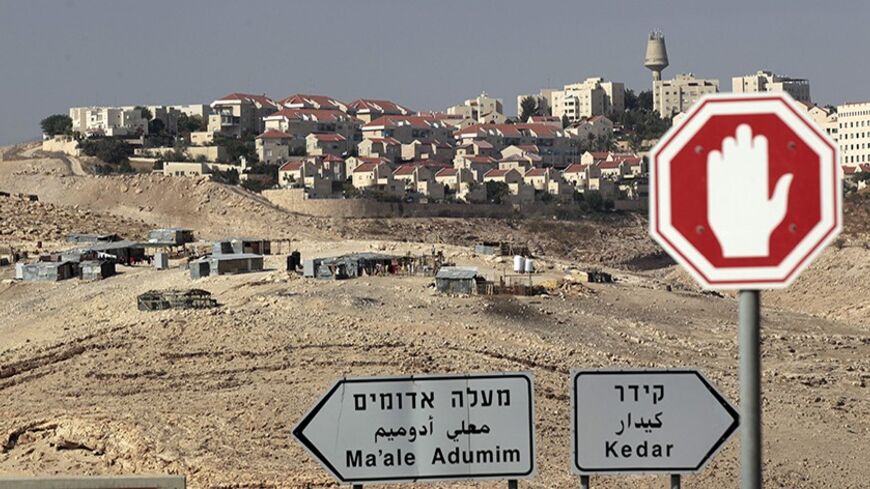 Sign posts are seen in front of the West Bank Jewish settlement of Maale Adumim near Jerusalem, Nov. 13, 2013. - REUTERS/Ammar Awad

Israeli Housing and Construction Minister Uri Ariel (HaBayit HaYehudi) chose to mark the opening of the 47th Jerusalem Day celebrations on May 27 at the prestigious Merkaz Harav rabbinical college, which is one of the emblems of religious Zionism. Before thousands of enthusiastic spectators, Ariel declared, “Jerusalem will never again be divided. There are and will be no more freezes [on settlement construction], and we will not put up with the delays or restrictions [on construction] in Jerusalem and Judea and Samaria. We will continue to build in all parts of our land.” Ariel sees his role in the government as an ideological mission, and thus makes the most of it. Prior to virtually each of US Secretary of State John Kerry's visits to Israel, Ariel took care to announce yet another new construction project, intent on sabotaging the talks.

Ever since what looks like the collapse of the negotiations, Ariel has had much to celebrate. And there is nothing like Jerusalem Day to display sentiments by making euphoric statements on the ongoing construction in the city. However, what Ariel and the other right-wing leaders apparently refuse to realize is that by their very rejection of the two-state solution and the division of Jerusalem they are sowing themselves the seeds of a binational state.

The 47th anniversary of the liberation of Jerusalem, just like any preceding year since the commencement of peace talks between Israel and the Palestinians over two decades ago, weakens even further the ability of the two sides to bring an end to the conflict. As time passes, the reality in the city is becoming ever more complicated.

Last March, the Ir Amim association released a report examining the feasibility of a solution to the issue of Jerusalem — this, against the backdrop of the peace efforts by Kerry. The report draws a gloomy picture.

According to the statistics, since 2000, the Israeli control over East Jerusalem has significantly expanded. Over that period, 9,863 housing units were built, thus expanding the Israeli-controlled territories and deepening the split between the different Palestinian neighborhoods. According to the report, the most outstanding change is that of the massive development of the Har Homa neighborhood in southern East Jerusalem, growing from a mere 274 housing units to 4,299 units. This expansion is at the location that cuts off the Palestinian territorial continuity in the southern part of the city, between the Palestinian neighborhoods of Jerusalem and Bethlehem and its environs.

Other changes are the expansion of Israeli outposts within the Palestinian neighborhoods in the historic Jerusalem Holy Basin, as well as the development of tourist compounds in the area and the transfer of control over those sites to settlers' organizations. The report further states that the vision of metropolitan Jerusalem is coming to life also through the network of highways that link the settlement blocs and the main traffic artery of Jerusalem. These roads crisscross the Palestinian terrain, both inside Jerusalem and throughout its surroundings.

These processes fulfill the wishes of the Israeli right, which seeks to build up until the point of no return.

In the case of Jerusalem, things get even more complicated following the movement of residents between the Jewish and Arab neighborhoods, and the splitting of neighborhoods in East Jerusalem. Under the Clinton Parameters (for a permanent status agreement), presented in 2000, the city was to be divided according to the majority populating each area and neighborhood. That is, neighborhoods with an Arab predominance were supposed to be transferred to the Palestinians. However, given the reality where populations mix deliberately within these areas, and as time goes by, it becomes more and more difficult to implement the proposed solution.

While these changes are going on, other problematic processes take place, putting off even further the two-state solution and the division of Jerusalem. The Ir Amim report depicts a gloomy picture regarding the scope of poverty among some 300,000 Palestinians living in East Jerusalem. According to the report, this population is discriminated against not only in terms of citizenship status — the East Jerusalem Palestinians do not possess Israeli identity cards, their status being that of “residents” — but also with respect to welfare and development budgets. Thus, for instance, there is a lack of more than 2,000 classrooms in East Jerusalem; there are not enough health care centers for infants and toddlers; and there are serious water supply problems. The East Jerusalem Arabs are discriminated against with regard to the realization of their civil, community, social and economic rights.

In this "pressure cooker" of East Jerusalem, a young generation of Palestinians who seek a better life is growing up. Some are influenced by the ideas of the Arab Spring in neighboring countries, while many are beginning to speak out about their right to equality. This means that as time goes by, and as the diplomatic solution is drifting away, the youths of East Jerusalem are gradually turning their back on the two-state solution. Instead, they are developing the concept of a single state, where they would insist on being recognized as equal citizens.

“We, the youths, have given up on the concept of the two-state solution. We realize that it is not happening, and we are thus looking for other solutions. More and more, I hear people talk of a binational state, where there will be equality of rights.” Ziad Khalil Abu Ziad, 28, from the Palestinian East Jerusalem neighborhood of Beit Hanina, said at a conference on May 26 organized by Ir Amim to mark Jerusalem Day. Abu Ziad is the spokesman of the Fatah Youth Movement and a political activist. His uncle Ziad Abu Ziad was a Palestinian politician of the Arab East Jerusalem aristocracy. He himself was one of the first residents of East Jerusalem to study at the Hebrew University of Jerusalem — despite attempts to block his way there. He even established a Palestinian student cell at the university. Currently, about 2,000 East Jerusalem Arabs are studying at the university's Mount Scopus campus.

With every passing day, the feasibility of the division of Jerusalem, which is an essential condition for the implementation of the two-state solution, is drifting further away. And on the 47th Jerusalem Day, of all days, the housing and construction minister declares that Israel will further expand Jewish construction in the Palestinian neighborhoods of East Jerusalem — and thus, pushes away any hope of peace and calm in this wounded and troubled city.